International Webinar Study by FIB Undip: Observing Local Wisdom as Part of the Past, Present, and Future 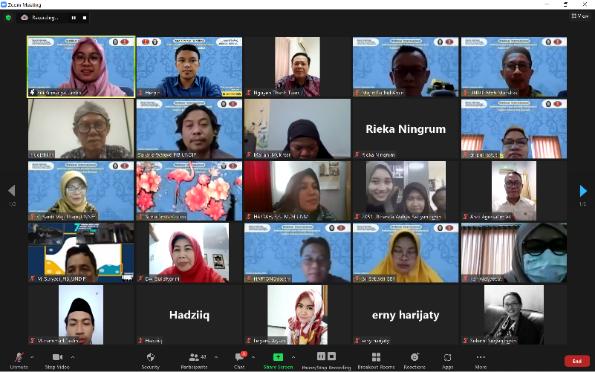 Local wisdom that lives in the community until now has redefined itself into a discussion, is it true that today there are still many local wisdom that survive or are they sinking. Through an international webinar held on Tuesday, August 9, 2022, entitled “Reconstruction of Local Wisdom of Nusantara: Study of Language and Culture”. This webinar raised interesting discussions, especially with the presence of two speakers who were recognized for their achievements in the world of culture. The event is a program of the Indonesian Literature Study Program, Faculty of Humanities, Diponegoro University.

The event started at 13.00 WIB was opened with remarks from Dr. Sukarjo Waluyo, S.S., M. Hum. (Head of Indonesian Literature Study Program, Faculty of Humanities, Diponegoro University) and Dr. Nurhayati, M. Hum. (Dean of the Faculty of Humanities, Diponegoro University). Both revealed the facts of local wisdom in the current era. An interesting discourse when modernity is so overwhelmed with contemporary human problems. The Covid-19 pandemic proves that we need to revisit our local wisdom. A wealth of human culture and treasure has proven to be effective in its long journey.

The event was hosted by Drs. Muzakka, M.A., a philologist at the Indonesian Literature Study Program. The main speaker is Prof. Dr. Mudjahirin, M.A., an anthropologist from the Faculty of Humanities, Diponegoro University. He offered strategies on how to actualize and reconstruct local wisdom to formulate culture in the present and the future. For this reason, synergy is needed between students, lecturers, and the government to implement it and raise issues of theoretical and practical local wisdom. The study of local wisdom reconstruction needs to be revealed by looking at the construction that is starting to change.

“It’s not romance about the past through local knowledge but how local knowledge becomes relevant and actual for the future. We can change civilization through a process called culture.” said Prof. Mudjahirin when conveying his thoughts as the opening speaker.

Furthermore, Prof. Mudjahirin said that local wisdom is not to leave the past, but to be relevant so that it is not left behind. Many people are actually close to deterministic thinking which is actually wrong because at this time many stories have developed from zero to hero. It takes a literary expert to reconstruct it so that it does not become a leftover thought and this is done to balance the ideal culture with the factual culture.

The second speaker is a lecturer from the University of Social Sciences and Humanities, Vietnam National University, Ho Chi Minh City. Dr. Nguyen Thanh Tuan, M.Hum. or familiarly called Mr. Tuan brought material about ethnic groups in Vietnam, especially the Raglai tribe, which turned out to have some vocabulary that was almost the same as Indonesian. Mr. Tuan also revealed the unique cultural tradition of the Raglai tribe, namely putting women first from all sides.

The discussion became more interesting when the seminar participants began to ask questions about the reconstruction of local wisdom, especially for several traditions in Indonesia that still exist, to the question of the marriage tradition in the Raglai tribe, Vietnam. Several religions that exist in Vietnam are very open about marriage, especially interfaith marriages. Likewise for the government’s policy regarding the liberation of its people to embrace religion. Vietnam in reality allows all religions in the world to be embraced by its citizens. This multiculturalism certainly made some participants surprised and also interested because in Indonesia itself the tradition of interfaith marriage can still be said to be taboo.

Prof. Mudjahirin saw from a theoretical frame that local wisdom is a cultural heritage. By revealing the mystical stories that live in the community, Prof. Mudja returns this phenomenon to a redefinition of what local wisdom is. Some of the examples that were raised were regarding day and night, if day is a human representation, then night is a representation of demons. During the day humans are active, while at night it is time for demons to act. However this thought can be explained theoretically by verification. It will become a tool for the authorities to suppress the sacred when there is no awareness about the importance of maintaining local wisdom.

According to Dwi, one of the participants from the State University of Malang, some local traditions in his place are still being carried out today. However, reconstruction needs a new perspective so that it can be directed at economic efforts in ‘accompanying’ these local traditions. Dwi said that this sacred can also be juxtaposed with the profane ideas by building elements of multiculturalism. There are arts and traditions of Javanese, Chinese, hadrah, lion dance which then build tolerance,” said Dwi in his presentation about cultural multiculturalism.

The event closed with a good answer about local traditions in Indonesia and also local traditions in Vietnam. The invitation to take a serious look at the existence of local wisdom from various sides was the closing of the discussion on the webinar which attracted around 80 participants. (Ikom)