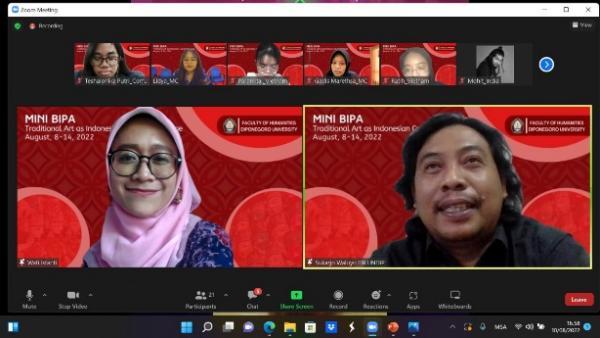 The vastness of nature, the beauty of art and culture, and the harmony of life that is always moving invites its admirers to explore every inch of it. This is what seems to appear to describe the enthusiasm of the participants of the 2022 Summer Course FIB UNDIP which raised the topic of “Traditional Arts as Indonesian Cultural Heritage” which took place on August 8-14, 2022. On the third day, August 10, the event featured Dr. Sukarjo Waluyo, M. Hum. from the Faculty of Humanities, Diponegoro University and Wati Istanti, M.Pd. from FPBS, Semarang State University.

Dr. Sukarjo Waluyo presenting the material “Kethoprak: The Heroism Story of the Javanese Knights” revealed that the art of kethoprak is a traditional Javanese drama performance that originally came from Solo. This art was originally an entertainment medium when the bubonic plague hit in the city of Solo in the 1920s for people who were undergoing a period of quarantine. The stories shown are also simple stories. In its development, the art of kethoprak is identical to popular folk art, its position is that it is often positioned opposite to wayang (shadow puppets art) which is often identified as elitist art (art of nobility).

Dr. Sukarjo Waluyo further revealed that kethoprak as an art that is popular in various regions in Java in its performances can generally be divided into three types. First, the kethoprak which displays the story of the Majapahitan era (Hindu-Buddhist, between 1200s-1400s. This is marked by the Majapahitan costume with a background story of the era of the Majapahit Kingdom, Kediri Kingdom, Singasari Kingdom, and the landing of Admiral Cheng Ho in Java. Second, the kethoprak which displays the story of the Demak period (pre-Islamic, between the late 1400s-late 1500s).This is marked by costumes that already show Islamic and Malay influences with the background of the story of the era of the Sultanate of Demak and several other important cities, such as Jepara, Kudus, Cirebon , Banten, and Palembang. Some plays can also feature stories about Malays, Baghdad, and Turks. Third, kethoprak which shows stories from the Mataraman era (1600s—the Dutch colonial era). This is marked by costumes that already show the influence of modern Javanese costumes or Mataraman with the background story in the era of the Pajang Sultanate, the Islamic Mataram Kingdom, and the successor dynasties (Surakarta Kasunanan, Yogyakarta Sultanate, Mangkunegaran, and Pakualaman).

Solo, the Hometown of Kethoprak

Dr. Sukarjo Waluyo explained the importance of the city of Solo, which is widely referred to as the hometown of kethoprak art. Solo in the past was the capital of the kingdom which was at the same time the center of politics, economy, knowledge, and the arts of Java. In the city of Solo, there are Kraton Kasunanan Surakarta and Kraton Mangkunegaran which are independent. In this city there are also representatives of the Dutch colonial government in Java which functioned as institutions of political and economic control.

As the place where the king reigned, Solo was one of the economic centers of Java that benefited greatly from the benefits of tea, coffee, tobacco, rubber plant, sugar cane, and rice plantations which were abundant. The city also established sugar factories to meet the world’s sugar demand, which is said to be 30 percent supplied from Java. Solo is also the center of Javanese arts and culture. In Solo, many entertainment and recreation centers have been established, such as Sriwedari Park and a resting place as well as Tawangmangu nature tourism on the slopes of Mount Lawu.

In the current era, kethoprak has become a folk art that metamorphoses even wider. The current kethoprak performance has developed into a modern Javanese drama performance. The performances have utilized modern media and collaborated with other art genres, such as music, sound art, installation art, and even cinematography. The art of kethoprak also functions as a space for communication and education and belongs to many segments of society.

Community leaders or institutions are even willing to spend time in the midst of business for a kethoprak performance. Currently, Kethoprak is even staged by public officials, such as the Governor of Central Java Ganjar Pranowo. Diponegoro University and University of Indonesia are two campuses that are very enthusiastic about holding kethoprak performances.

Meanwhile, Wati Istansi, M.Pd., a lecturer from the Faculty of Language and Literature Education (FPBS), Semarang State University delivered material on traditional dances in Indonesia, especially Gambang Semarang. Gambang Semarang is a traditional musical art originating from Semarang. If we look closely, this dance is a combination of music, vocals, and dance (sometimes added with comedy). The hallmark of this art is the music that accompanies it dynamically played according to the rhythm of the song. The musical instruments used are bonang, gambang, gong suwuk, kempul, peking, saron, kendang and ketipung. This dance is a cultural acculturation of several ethnic groups in Semarang. Several pioneers of the dance including Lie Ho Sun and Oey Yok Siang.

Wati Istansi, M.Pd., who is a doctoral candidate from the Doctoral Program of UNS Solo, revealed that Gambang Semarang art is a derivative of the Betawi, Gambang Kromong art which is closely related to Chinese culture. Gambang Semarang was originally the idea of Lie Ho Sun, in 1930 to bring and develop Gambang Kromong in Semarang. The idea was presented to Burgermeester (the mayor) and immediately got a good response. Lie Ho Sun himself is a member of the Volksraad who likes to play keroncong music.

On this occasion, the young lecturer who has traveled around various countries to teach BIPA also invited participants from various overseas campuses to practice dancing. The summer course event which took place online was even more lively with dancing together which appeared on the laptop screen of each participant. (SW)