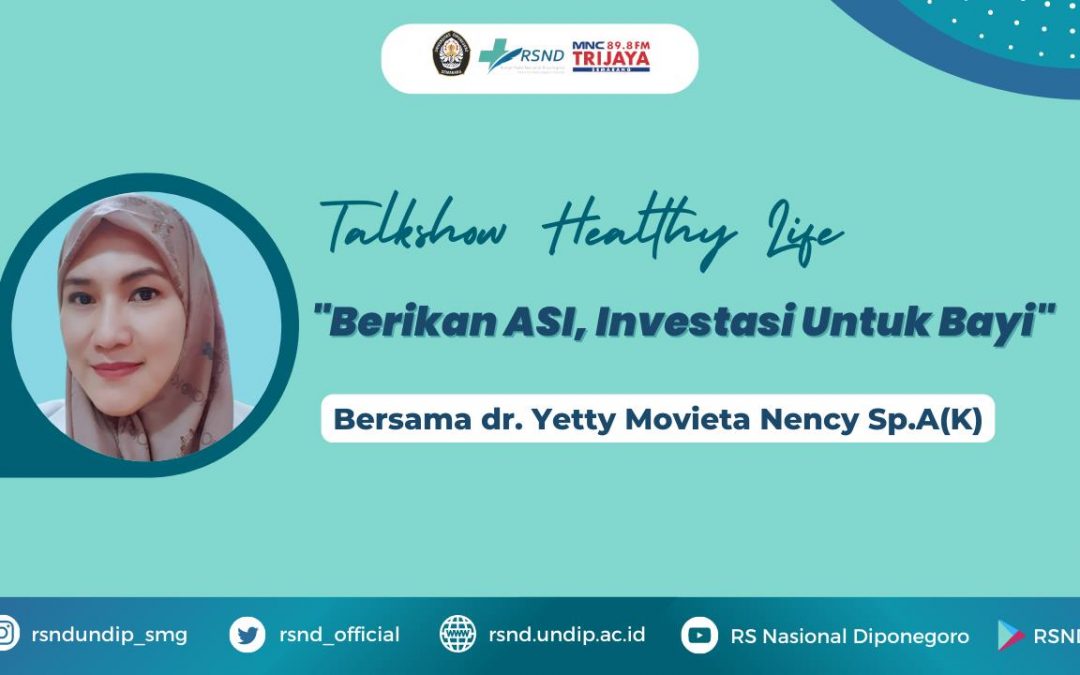 World Breastfeeding Week is celebrated every year on the first week of August 1-7. According to WHO, breast milk is an ideal nutrition for infants where the nature of breast milk itself is clear, clean and contains antibodies such as DHA, AA, Omega 6, lactose, taurine, protein, lactobacillus, vitamin A, colostrum, fat, iron, lactoferrin and lysozyme which are in the right dosage and composition for babies. Therefore, breast milk is very important in forming the immune system in infants which can help protect children from many common diseases, increase intelligence, and help brain development so this is an investment for babies.

In commemoration of the World Breastfeeding week, PKRS RSND in its routine activity, namely the Healthy Life Talk Show on Thursday, August 4, 2022, raised the theme “Breastfeeding is Investment for Babies” with invited an expert, dr. Yetty Movieta Nency, Sp.A(K).

Based on the explanation from dr. Yetty, World Breastfeeding Week was commemorated in order to form an ideal generation that holds the nation and state, because breast milk contains perfect nutrition. Support mothers to give breast milk from the beginning, in order to form a good body, intellectual, emotional, and social in children.

“Mother, since ANC (Antenatal Care) must have prepared breast milk, to prevent various possibilities before the baby is born. If breast milk is replaced, in addition to having an impact on the baby, it will also affect the family’s income which is getting swelled because the money that should be used to buy basic commodities is instead used to buy formula milk. Plus if the formula milk intake is excessive it can cause obesity in children or if diluted will result in children being affected by malnutrition.” said dr. Yetty.

“The golden period of child growth at the age of 2-5 years, must be maximized by breastfeeding. The composition of breast milk is very ideal compared to formula milk. Breast milk also has a defense substance that causes the baby not to get sick easily. If you are often sick, your quality of life will be disturbed, because you have to seek treatment and your expenses will increase.” she continued.

dr. Yetty mentions several benefits of breastfeeding, including the child and mother will have a strong bond, in the sense that it is easy to control, in the future life and the child is easy to advise; breastfeeding has a long-term intellectual effect. In Australia, a study was conducted which showed that children who were exclusively breastfed had a higher IQ and good memory than those who were not exclusively breastfed; with breast milk, babies will avoid the risk of various diseases because breast milk will form the immune system; Colostrum, the yellow liquid that first comes out in breast milk, if it flows into the baby’s intestines will form resistance. Colostrum itself is high in protein so it is an investment for the baby; and most importantly, breast milk cannot be replaced with any milk because its composition is the most ideal for baby’s growth.

“Exclusive breastfeeding is fully breastfeeding for 6 months, not mixing with formula milk. If this happens, it will not have a long-term positive impact on the child. Breast milk given in the age range of children 18 months will form good intelligence, strong endurance, form quality children, even when the baby is 6 months old, complementary foods are added.” said dr. Yetty.

Regarding production, breast milk is influenced by hormones, one of which is the prolactin and oxytocin hormones. The prolactin hormone will be produced when a woman is pregnant, while the oxytocin hormone is influenced by the mother’s psychological condition. If the mother is happy, the milk will come out a lot. Conversely, if the mother is stressed, sad, or moody, then the milk produced will be little. Thus dr. Yetty advised families and the surrounding environment to support breastfeeding mothers so that mothers are always happy. Society should not suggest formula milk for when breast milk has not yet come out.

“For mothers or mothers-to-be, the intention must be firm when breastfeeding because breast milk is the first, the best, and irreplaceable nutrition for babies. If breast milk does not come out, it can be resolved with various solutions, not by replacing breast milk with formula milk. If you give up not giving exclusive breastfeeding, it is very unfortunate because this is a gift from God where during pregnancy it will be accompanied by milk production. For mothers who are out of breast milk, breastfeed as often as possible. This will empty the breast so that there will be a signal from the oxytocin hormone to produce more. For career women, do not let the business take your time to not to give breast milk to the baby. Career women can express breast milk before work and then freeze the milk. Lastly, if we want our babies to become a quality generation, then give breast milk as an investment for them.” concluded dr. Yetty.