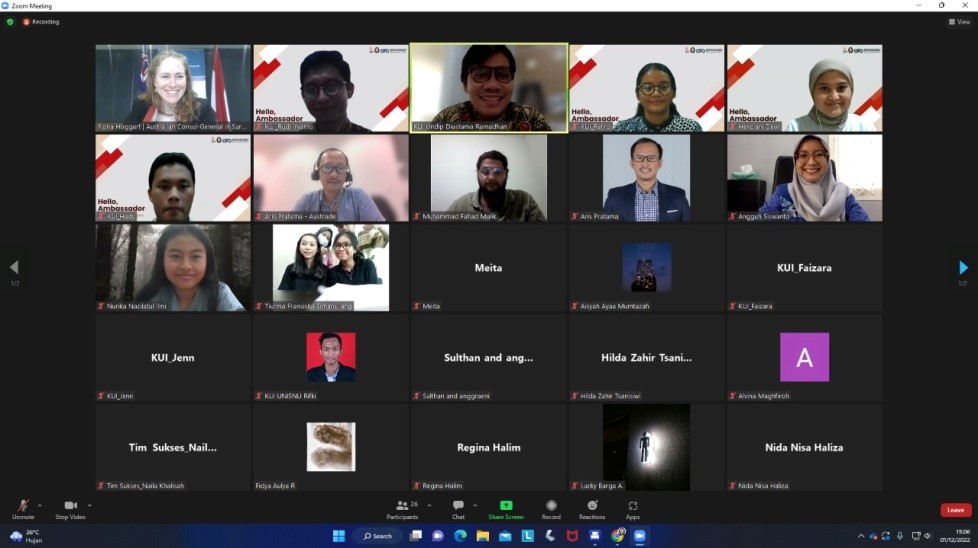 Semarang, December 1, 2022 – Webinar “Hello, Ambassador!” is an annual work program organized by the Diponegoro International Office (DIO) where in 2022, Madame Fiona Hoggart, Australian Consul-General in Indonesia is invited as a guest speaker. Hosted by Diastama A. Ramadhan, S.H., LLM, Deputy Head of the International Office of Diponegoro University (Undip), the webinar ran lively accompanied by great enthusiasm from the participants. This event was attended by dozens of participants, both Undip students and participants from other universities.

Madame Fiona Hoggart as the guest speaker started the discussion by explaining the history of diplomatic relations between Indonesia and Australia and discussing the complexities of global dynamics. In her presentation, the uncertainty of the global economy both in the international trade and financial sector has made cooperation between countries have a strategic position. This also has an impact on Indonesia, which is the host of the Group of Twenty (G20) forum in 2022, and has a central position in supporting global economic recovery.

Then, Madame Fiona Hoggart also explained about education in Australia. There are several reasons that make Australia a destination for Indonesian students. First, universities in Australia are able to occupy the top world rankings. Second, the cost of living and daily needs are quite affordable. Finally, both Indonesia and Australia have the same language, in which they learn English and Indonesian from each other, so that it can make it easier for students to communicate.

Undip as one of the higher education institutions in Indonesia has a great opportunity to establish good relations and cooperation between Indonesia and Australia, especially in the field of education. This is evidenced by Madame Fiona Hoggart’s statement just before ending the discussion, “Australia and Indonesia have good collaboration in research and higher education through scholarships programs, publications, and student exchange.” At the end of the event, the webinar was closed with a question and answer session and group photos. (ST-AS)