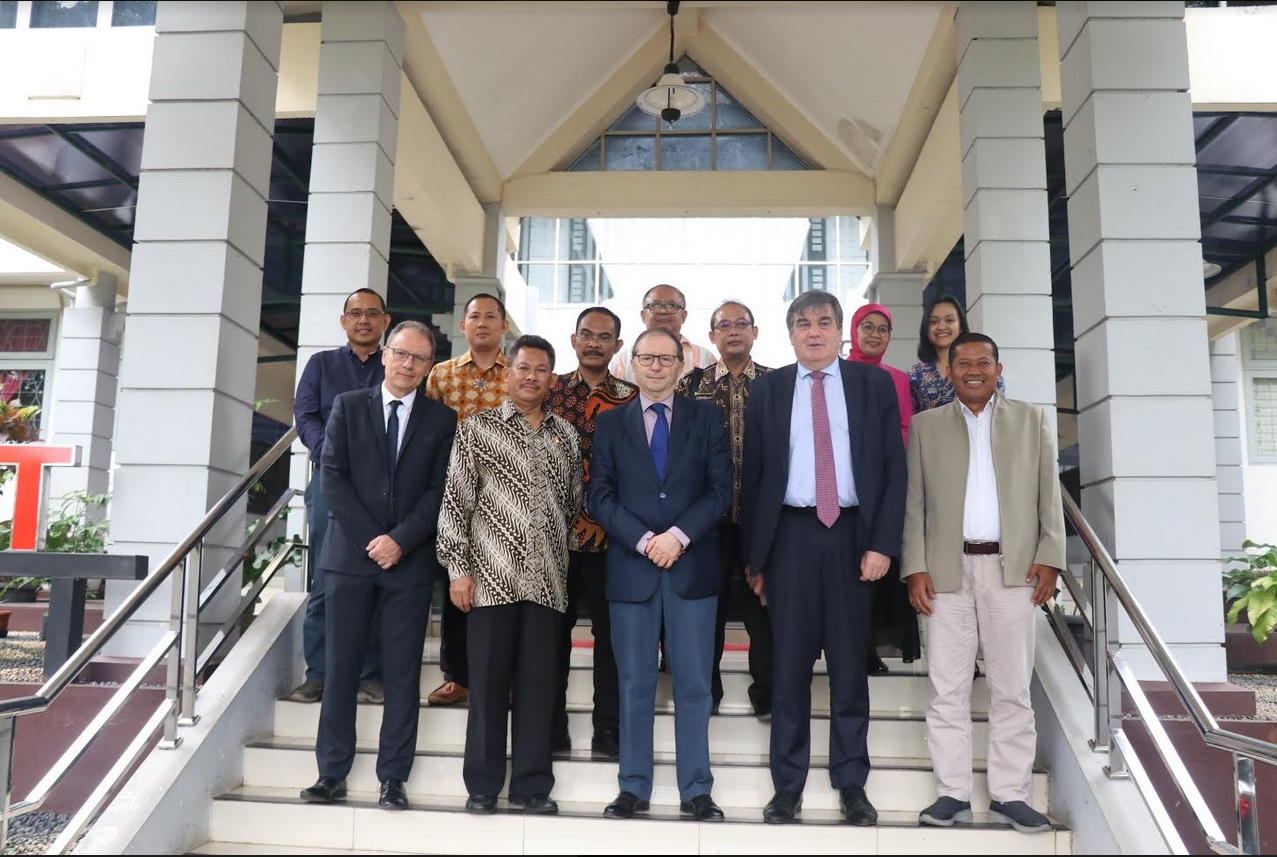 Visit of the French Ambassador H.E. Jean-Charles BERTHONNET to Universitas Diponegoro (Thursday, 11 April 2019) accompanied by Mr. Marc PITON as Counselor for Cooperation and Cultural Action and Director of the French Institute of Indonesia (IFI) and Mr. Philippe GRANGÉ as Cooperation Attaché for French.

The visit was in the context of increasing academic and research collaboration between Universitas Diponegoro (UNDIP) and universities in France that have been closely intertwined for more than 20 years.

In his remarks, the Vice Rector for Academic and Student Affairs, Prof. Dr. Ir. Muhammad Zainuri, DEA said that all this time the collaboration of UNDIP – France had produced more than 90 graduates of the Double Degree Master program in the fields of urban planning, maritime and economics. In addition to these 3 fields, the Medical field has also collaborated with Université de Poitiers.

UNDIP also has a student that graduated with a Double Degree in the field of Doctorate in marine collaboration with Université de Bretagne Sud. In addition, more than a dozen international joint research programs have been implemented and produced international publications written by both parties.

The collaboration also strengthened the relationship between the teaching staff at UNDIP and the professors from France, where UNDIP had been visited by more than 50 French professors in the past ten years for various collaborative activities such as guest lectures, keynote speakers in seminars and international joint research and publications. etc. Likewise the leaders and teaching staff of UNDIP have visited various universities in France for the purpose of increasing cooperation.

With the status of PTNBH and the UNDIP policy in 2019 which has been announced that it will enter the ranks of the world ranking 500 in the QS version, the expansion of international cooperation is a necessity.

In his remarks, the French Ambassador said that he was very happy to visit UNDIP for the first time and said that the achievements of the UNDIP collaboration were very good in the past 20 years. The Ambassador noted that UNDIP has Mamunia Resources that are very dynamic, and are supported by teaching staff who are alumni from France, so that existing cooperation can continue to be improved given the vast potential.

The Ambassador is ready to support the next UNDIP-France cooperation program and is ready to help solve existing problems, including funding for scholarships.

On the occasion of the visit to Semarang, the French Ambassador on the day before Wednesday 11 April presented an award from the French Government namely “Chevalier and l’ordre des Palmes Academiques” to the teaching staff of the Marine Sciences Study Program, Dr. Ir. Ita Widowati, DEA for her role in developing academic collaboration with France.

The meeting in UNDIP was attended by officials at Universitas Diponegoro, including the Dean of the Faculty of Economics Dr. Suharnomo, S.E., M.Sc; Dean of the Faculty of Medicine Dr. dr. Dwi Pudjonarko, M.Kes., SP.S (K); Chairperson of MPWK Dr.sc.agr. Iwan Rudiarto, S.T ,, M.Sc and Chair of International Office. (Dr. Ir. Ita Widowati, DEA and other relevant officials.

The Deans and the person in charge of the program conveyed the existing cooperation so far and plans for further development and discussion of the solutions to the existing problems.