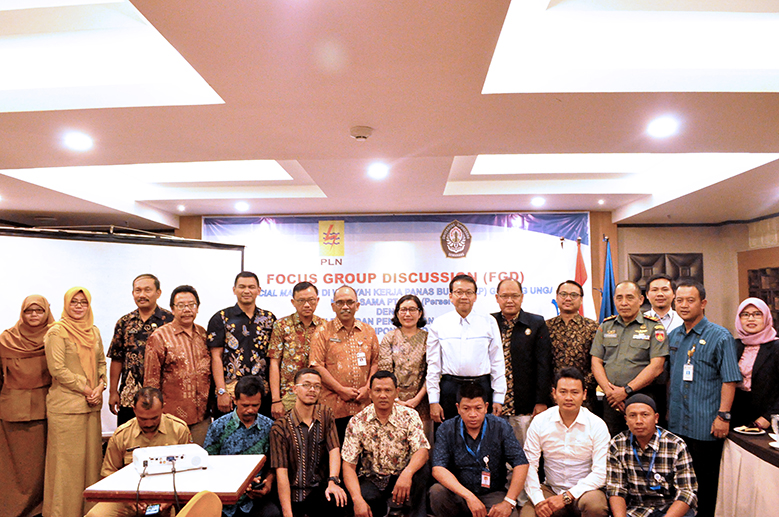 Geothermal is now an important issue as an alternative energy to reduce energy use from fossils. Geothermal has a sustainable nature that is sustainable and supported by existing resources. One area that has the potential to produce geothermal energy is Mount Ungaran. Planning and social mapping are needed in the context of the construction of a Geothermal Power Plant (PLTP) by PT PLN (Persero) which is one of the BUMNs mandated by the Ministry of Energy and Mineral Resources (ESDM) to develop geothermal energy.

Present at the FGD was the Plt. Head of LPPM, Dr. Jamari, ST., MT. representing the Vice Rector of Academic and Student Affairs said that, “basically technology and culture is progressingsimultaneously, meaning new technologies can build new cultures. It is expected that the presence of PLTP supports the surrounding community. ” He added, “many experts from Undip are active in research and service activities, considering Undip placed a 3rd ranks for research and 2nd for service,” he added.

Representing the Vice Head of the Indonesian Parliament, Yuafrinaldi, M.En. as the Energy Expert Staff of the House of Representatives of the Republic of Indonesia said, “In principle, the development of geothermal energy in Ungaran can provide benefits”.

Meanwhile from the Ministry of Energy and Mineral Resources represented by Ida Nuryatin Finahari as Director of Geothermal Directorate General of EBTKE explained, “The current national energy condition of 92 percent still uses fossil energy with almost all of the raw materials are imported. Theonly thing we own are coals. The contribution of New, Renewable and Energy Conversion (EBTKE) is still only 8 percent. ” She also said, “It is targeted by 2025 we will have a mixed energy source, one of which is geothermal energy with a target increase of 23 percent to be used for electricity and non-electricity generator (biodiesel)”.