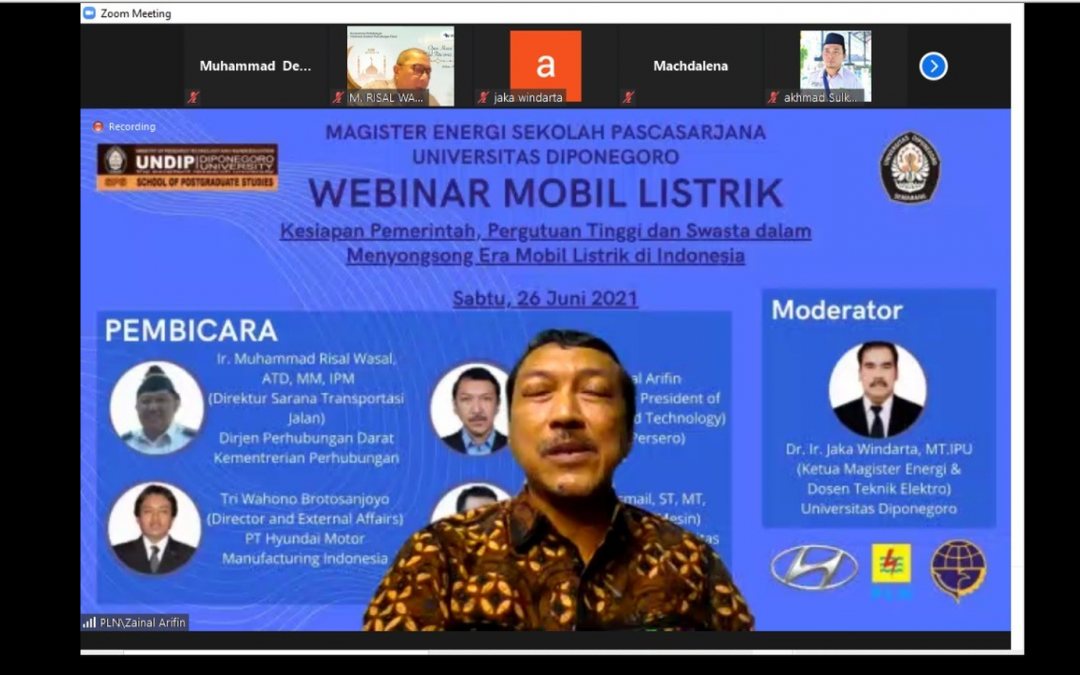 SEMARANG – Master of Energy Study Program at Postgraduate School of Diponegoro University (UNDIP) discussed Indonesia’s readiness to enter the era of electric cars, by presenting competent and capacity-driven speakers. The speakers presented at the webinar with the theme “Readiness of Government, Universities, and Private Institutions in Welcoming the Era of Electric Cars in Indonesia” are Director of Road Transportation Facilities, Director General of Land Transportation of the Ministry of Transportation, Mohamad Risal Wasal as representative of the government; Executive Vice President of Engineering and Technology PT. PLN (Persero), Zainal Arifin, as a representative of the electric vehicle infrastructure provider; Director/External Affairs PT. Hyundai Motor Manufacturing Indonesia, Tri Wahono Brotosanjoyo, as a representative of electric vehicle manufacturers in Indonesia.

Head of Master of Energy Postgraduate School Undip, Dr. Jaka Windarta MT. IPU, emphasized that the webinar which was held on Saturday (26/6/2021) was aimed to provide an overview of the readiness of the government and the private sectors in welcoming the era of electric cars. Jaka Windarta, who is also a lecturer at Electrical Engineering Study Program stated that readiness to enter the era of battery-based electric motorized vehicles is actually already exist in the community. “This activity is a form of higher education’s participation,” he said.

Master of Energy Study Program at Undip is a study program under Postgraduate School which is dedicated to prepare human resources in the fields of energy planning, energy conversion, energy efficiency, and new and renewable energy. Master of Energy Undip targets its graduates not only to have knowledge and analytical skills, but also to be prepared to have competencies that are legally recognized with certification.

Due to its multidisciplinary nature, Undip Master of Energy Study Program is supported by 20 lecturers from various expertises. “So our programs are from various backgrounds, both from engineering, Mathematics and Natural Sciences, economics, as well as law fields. We provide policy courses, regulatory and policy analysis,” he explained about the study program which was established in 2015.

The Ministry of Transportation’s Official, namely the Director of Road Transportation Facilities, the Director General of Land Transportation of the Ministry of Transportation, Mohamad Risal Wasal, at the online webinar emphasized the government’s readiness to enter the era of battery-based electric motorized vehicles. It is said that the government is even trying to speed things up by simplifying and lowering the costs incurred. One of them can be seen from the Type Test Certificate fee with a maximum proposal of Rp. 1 million for battery-based motorcycles. “We are trying in such a way that people will be interested in making electric motorcycles, electric cars, or using them for daily needs,” explained Risal.

Risal also said that the Ministry of Transportation has pioneered the use of electric vehicles as operational vehicles to support the program to accelerate the use of battery-based electric motorized vehicles. In addition to the process of obtaining a Type Test Certificate, according to him, there are six additional tests for electric cars including battery performance, recharging devices, electrical touch protection capability testing, functional safety, hydrogen emission for batteries with charging fluid, and special sound tests for car.

Executive Vice President of Engineering and Technology PT. PLN (Persero), Zainal Arifin, at the forum revealed the steps taken by PLN to support electric vehicles. Judging from the source of energy, PLN’s production is very sufficient. “Even now, we actually have problems because of overcapacity. There is a suggestion that of the 60 gigawatt PLN capacity, there are still 14 gigawatts that have not been used,” he said.

Another step taken by PLN is to build infrastructure of public electric vehicle charging stations and a battery swap facility   to prepare for the use of battery-based electric motorized vehicles. He ensured that PLN supports the program to accelerate the use of electric cars in Indonesia by providing a showcase of 34 units of public electric vehicle charging stations in 23 locations. “However in total, if you calculate it with the private facilities not the public ones, the total is now 147 charging units. The obstacle is that not everything is available to the public,” said Zainal Arifin.

In addition, PLN has also developed a charge.in platform to help users find out the position of existing stations in real time and to know the condition of their charging whether someone is using it or not.

The electric vehicle manufacturers, represented by the Director of External Affairs, PT. Hyundai Motor Manufacturing Indonesia, Tri Wahono Brotosanjoyo, emphasized that his company provided concrete support for the acceleration of the electric vehicle program in Indonesia. Hyundai Motor has moved its head office from Malaysia to Indonesia. “So Indonesia has overseen the entire Asia Pacific for its headquarters and research and development,” said Brotosanjoyo.

He also conveyed the marketing strategy carried out by his company, ranging from pricing, operations, promotions, and product strategies. Concrete examples that are being done are to continue improving efficiency and to make their products cheaper, to make many product variations, and to promote by replacing government operational vehicles with battery-based electric motorized vehicles.

For now, the price of Hyundai products, namely KONA, is at Rp. 697 million and IONIQ at Rp. 677 million. He hopes that the price will be more competitive in the future. “We continue to press so that the price can be even lower,” he said.

Regarding the investment plan from Hyundai, Brotosanjoyo said that his party has a factory that is in the production preparation stage and is located in Cikarang. This factory has a capacity of approximately 250 thousand units per year. The total investment is approximately IDR 25 trillion when converted to rupiah at an exchange rate of IDR 15 thousand, and the total employees are almost 4,000 people. Then his party has also purchased 77 hectares of planes. In the factory layout, there is also a plan to build an R&D site which in the future will be opened as a training center. He said other parties such as universities and ministries could collaborate with Hyundai. “We are currently working on what we will collaborate with in the future,” he said. (PR team)