Cindy Oktaviani, Best Graduate of Faculty of Psychology UNDIP, with Her Thesis on Revival of Racers After Serious Injury 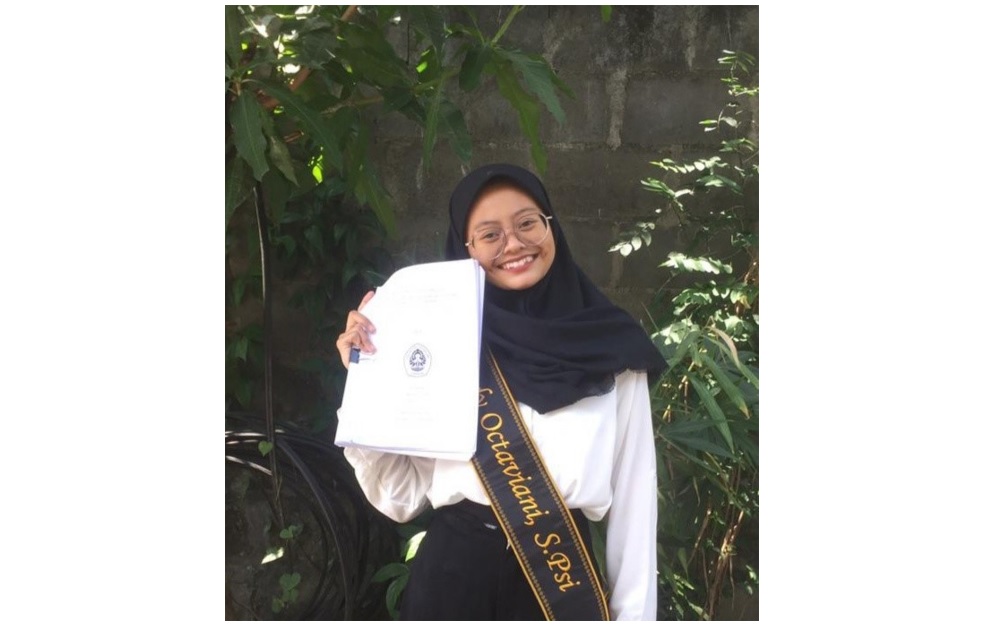 SEMARANG – Ayu Cindy Oktaviani is the best graduate of Faculty of Psychology, Diponegoro University (UNDIP) at the Judiciary Period of September 30th 2021. The Undip student class of 2017 graduated with a GPA of 3.60 with a thesis on the theme of the revival of racers after a serious injury.
The girl who was born in Solo on October 4th 1998, admitted that she was very happy to be listed as the best graduate from Faculty of Psychology Undip. Cindy successfully completed her studies with a four-year study period. The thesis that led her to graduate as a Bachelor of Psychology entitled: “Rising After Falling: A Phenomenological Study of Racers’ Experiences Facing Severe Post-Injury Trauma”.
The choice of research for scientific work to get a bachelor degree is indeed unique and rare. “The reason I chose this title is because it has never been studied before. The object of this research is the experiences of three racers. They are racers who have experienced or have had serious injuries, such as broken bones or long-time injuries. The data that I explored and collected is in accordance with the thesis theme,” said Ayu Cindy to the Public Relations Team, on Wednesday (6/10/2021).
The results of her observation and research gave an illustration that indeed they were traumatized at first, but eventually accepted the situation and were able to move on with their lives. “They even had the courage to join racing again,” she added.
Cindy said, all the post-injury recovery process and their experiences, were recorded in details and neatly. “They can recover because they have high mental resilience. There is a spirit to keep fighting in accordance with the souls of the racers in the arena. They are always persistent and never give up.”
Regarding the profile of the source persons, Cindy refused to reveal their identities because of her agreement during interviews and observations. However, she did not mind mentioning the domicile of the racers who are the objects of her research. It was stated that the research sources consisted of two racers from Solo City, and one other racer from Karanganyar Regency.
Moreover, Cindy said that she was grateful that she could finish her education on time and become the best graduate. Becoming a psychologist has been her dream since she was in high school. “And Alhamdulillah I was able to enter Faculty of Psychology Undip. I can learn a lot here, which will definitely make me ready to enter the world of work and life in the midst of society,” she explained.
Ayu Cindy Oktaviani is a student who received the Bidikmisi scholarship during her study. She is also an active member of the organization. She was also active in Psimewah, a student activity unit in the field of theater at the Faculty of Psychology.
In addition, Cindy is also active in helping elementary and junior high school students around her house in Solo, by giving them tutoring for subjects they do not understand. “My goal is to be useful for other people, and of course my family, nation and country,” she said.
Being asked for tips on becoming a student with the best predicate, Cindy said that asking for prayers and blessings from her parents for every thing she will take is the first step she does. “Study seriously, manage time and schedule, set targets, and never give up when experiencing difficulties or failures. Don’t forget to take time to rest by doing the things you love,” she revealed the recipe for success in her studies.
Separately, the Dean of Faculty of Psychology Undip, Prof. Dian Ratna Sawitri S.Psi., M.Sc., Ph.D, said that the institution is consistent in encouraging students to graduate on time and get a good GPA. The faculty also encourages students to conduct research for thesis with themes that are relevant and needed by the community. It is including rare themes that can enrich the treasures of knowledge.
“The experience of doing college assignments, conducting literature reviews, conducting research, and reporting it as well is an exercise in forming soft skills that are useful for dealing with the world of work and community service after graduation. We also equip students with Internet of Things knowledge so that our graduates are ready to face the digital era,” said Sawitri. (PR team)
Translated by: Titis (Public Relations)
Share this :