FIB UNDIP Discussed the Actualization of Literature, Language, and Philology Studies in the Era of Disruption at the Visiting Lecturer 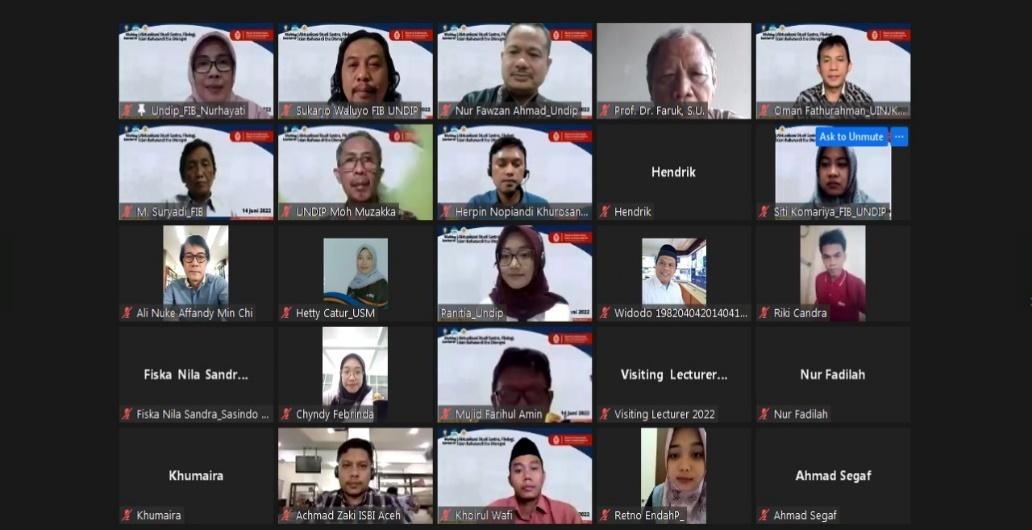 Tuesday (14/6) – The era that experts call the era of disruption, begins with the massive use of the latest technology. This causes various aspects of life to change rapidly or even lose their relevance. Things that were originally paradigmatic became almost completely abandoned. The faster and more massive these various technologies are developed and used, the greater the disruptive potential that will occur. This disruptive effect affects all existing living spaces, including the fields of language, literature, and philology.

Responding to the problems of language, literature, and philology in the era of disruption, Indonesian Literature Study Program, Faculty of Humanities (FIB), Diponegoro University (Undip) held a Visiting Lecturer event. The Visiting Lecturer event raised the theme “Actualization of Literature, Language, and Philology Studies in the Era of Disruption” and invited three expert speakers from leading universities in Indonesia.

This event was officially opened with remarks delivered by the Dean of FIB Undip, Dr. Nurhayati, M.Hum., and continued with remarks by the Head of the Indonesian Literature Study Program, Dr. Sukarjo Waluyo, M. Hum. Both agreed that the theme raised was an interesting theme to discuss in order to see the conditions and opportunities for literature, language, and philology in this era of disruption. For more than two hours, hosted by moderator Herpin N. Khurosan, M.A., the event took place with many interesting views on literature, language, and philology.

The first speaker, Prof. Dr. Faruk, S.U. from Gadjah Mada University, discussed “Literature in the Era of Disruption: Between Compliance and Resistance”. Prof. Faruk underlined his presentation by saying that living in the era of disruption is not difficult for literature because literature is used to bring up different ways of thinking that always demand innovation and are able to follow the rhythm of rapid and radical changes. However, the existing problem refers to the term disruption which means thinking differently, when living in a discourse of strong disruption makes literature live in similarities because each is required to think differently while, on the other hand, these demands result in obedience.

In his closing, related to literature, disruption, and the future, Prof. Faruk said “Faced with a future that is not too clear and not too certain, which cannot be predicted, in terms of disruption, literature must pay more attention to issues that have not been resolved by literature itself related to methodology.”

The next presentation entitled “Exaggerating Philology in the Era of Disruption” was delivered by Prof. Dr. Oman Fathurahman, M. Hum. From UIN Syarif Hidayatullah Jakarta. Prof. Oman described comprehensively the cycle of philological studies until its actualization in this era of disruption. Prof. Oman said that in the era of the 18-19 centuries, in Leiden, the study of philology was successful because there was an effort to exaggerate the relevance and importance of Indonesian manuscripts by Dutch scholars.

Currently, according to him, philology, in Indonesia, should still be exaggerated. Prof. Oman emphasized that manuscript studies, in this era of disruption, must respond by presenting innovations and participating in popular themes based on manuscripts. At the end of his explanation, Prof. Oman offered three infrastructure development ideas that allow philology to follow the current era: the creation of a Southeast Asian manuscript database portal, a Nusantara manuscript database portal, and an encyclopedia of texts and manuscripts of the archipelago.

The last speaker was Dr. M. Suryadi, M. Hum. from Diponegoro University who presented the materials in the field of linguistics entitled “Actualization of Language Studies in the Era of Disruption: Language Moves Fast and Massively”. Regarding linguistics, Dr. M. Suryadi, M. Hum. described that changes that occur in language practice in the era of disruption cannot be denied and will be followed by the development of linguistic theories. The era of disruption makes modern linguistic theories sometimes not able to explain the current linguistic phenomena. This is normal and should be seen as a challenge for young linguists.

After the presentation of the material described by the three speakers, the Visiting Lecturer continued in the discussion session. For more than two hours, the event took place with many new perspectives discussing issues of literature, language, and philology in the era of disruption. The event closed with the symbolic handing over of certificates from the organizers of the Visiting Lecturer to the three speakers. (Didit/Marta)