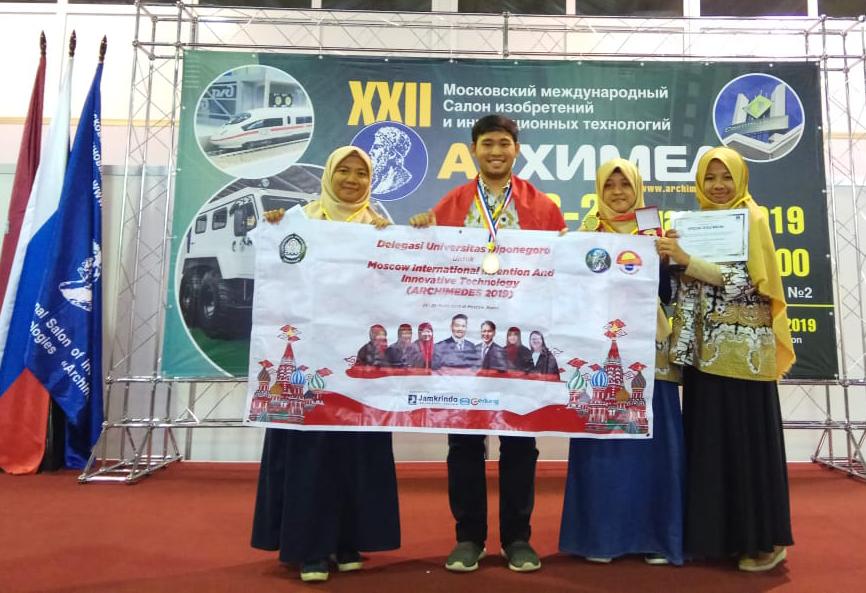 Indonesian Ambassador to Russia, Mohamad Wahid Supriyadi felt very proud of the achievements made by Rifki Rokhanudin and his teammates. “Sun and Rain Innovation Roof (SRI Roof) is a very good product of innovation, there is even one investor from Russia who is interested and hopefully can be used, and can be used for our community, most of whom still live in the countryside” he said during a visit Garuda Innovator team to the Indonesian Embassy in Moscow.

Analytical methods and testing were carried out to determine the amount of electrical output in this study. Based on the literature data, it was found that the use of 30 piezoelectric pieces connected in series with a mass of rainwater of 1000kg / mm3 can produce electricity output of 3.17 Volts and the use of solar cells obtained a maximum output voltage of 6 Volt. The output of the multifunctional tile depends on the intensity of the rainfall and the intensity of the available sunlight.

The difference with the tools that have already existed is that the previous product only used a solar cell, while the SRI Roof is a 2-season multifunctional tile, with the addition of piezoelectric, a different look which is an element of Mega Mendung batik art so it is more aesthetic value.

– Prepare flat / concrete and piezoelectric tiles which have been arranged in series and parallel.

– Simulation and calculating the voltage or power produced by SRI Roof.

Rifki Rokhanudin and friends are the teams sent by the Indonesian Invention and Innovation Promotion Association (INNOPA) at the Archimedes event in 2019 with a number of other teams. INNOPA as a private association that screens innovation projects by students and students to compete in international events in the hope that innovations that have been made can be developed and produced massively so that they are useful for the community.

Archimedes competitions and exhibitions are held annually by the Moscow City Organization VOIR and the International Innovation Club supported by the International Federation of Investors Association and the World Intellectual Property Organization. Archimedes this year was attended by more than 800 innovations from 22 countries, including Russia, Indonesia, Malaysia, Thailand, Korea, India, Romania, Czech, Macau, Germany, Saudi Arabia, Iraq, Portugal, Moldova, Kuwai, Canada, Poland and Morocco. At the opening ceremony, there was also the Deputy Chief Representative of the Indonesian Embassy in Moscow, Lasro Simbolon, who also advanced the innovation of the Indonesian team.

The Garuda innovators team is sponsored by Jamkrindo And PT. Wika Gedung.