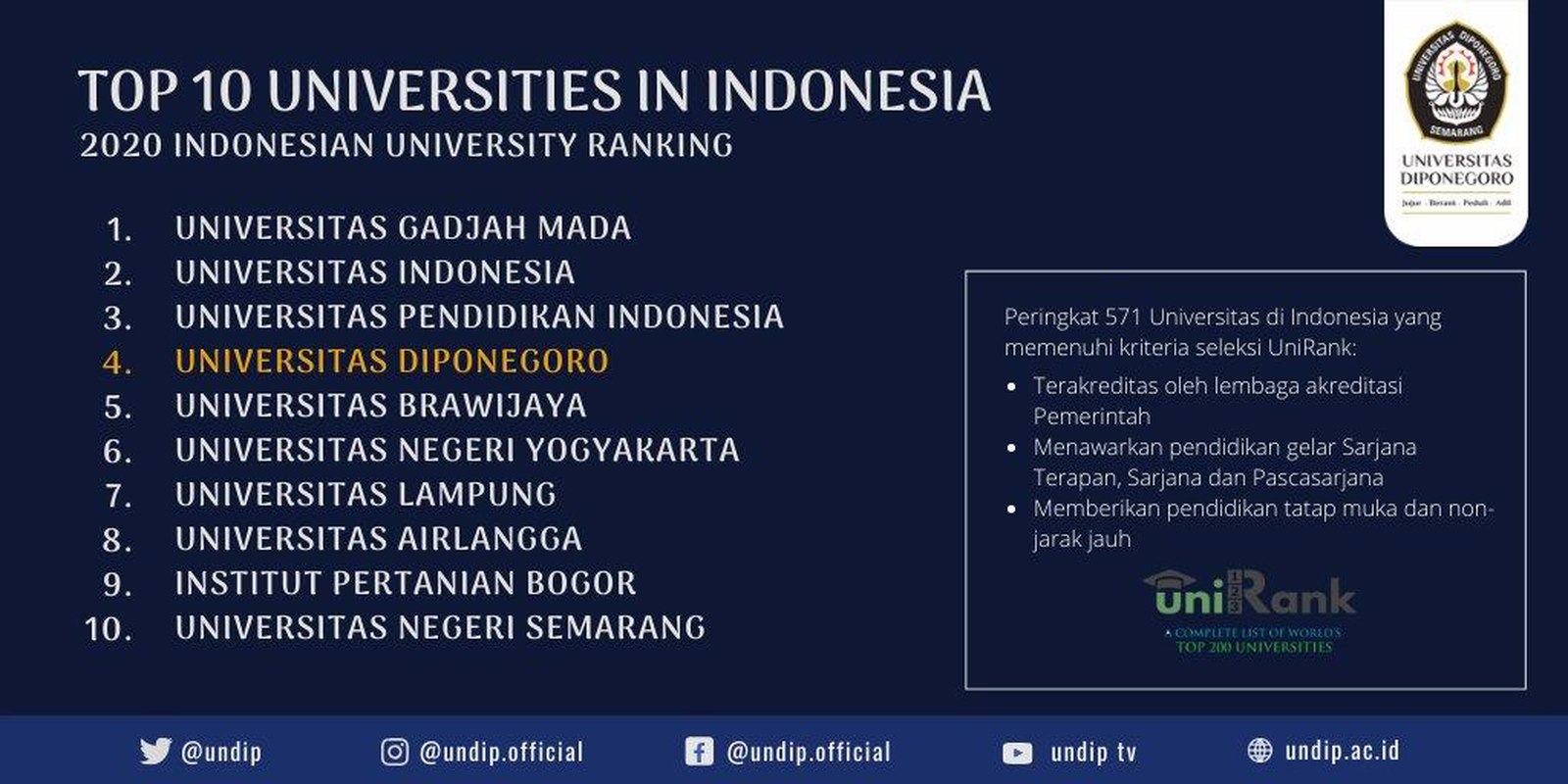 Diponegoro University (Undip) have ranked 4th in Indonesia based the World campus rating agency utilizing web popularity of each universities, namely 4ICU UniRank. The 4ICU UniRank site, 4icu.org, has announced a list of the best campus rankings based on web popularity for the world, regional and country levels, including Indonesia. Specifically, for the Indonesian region page in 4icu.org, it informs that there are as much as 571 higher education which are measured by the popularity of their respective official sites.

UniRank states that those higher education institutions have been accredited A by an official institution in Indonesia, namely the National Accreditation Board for Higher Education BANPT. In addition, it was also noted that it also serves undergraduate programs and postgraduate or doctoral programs in several fields, namely Arts & Humanities, Business & Social Sciences, Language & Culture, Medicine & Health, Engineering, Science & Technology. Universities in Indonesia that are included in the UniRank assessment list also hold the main method of learning with face-to-face lectures. UniRank claims that the measurement of the popularity of each college’s website uses the methodology tanpa bisa and refers to data from an independent web intelligence. Based on 4ICU University Rankings data, Diponegoro University (Undip) was ranked 4th in the top 10 list in Indonesia for 2020. Above Undip there were UGM, UI and UPI. While under Undip there were UB, UNY, Unila, Unair, IPB and Unnes. UGM has also managed to rank 59th in the list of Top 200 Universities in Asia according to 4icu in 2020.

This rank also shows Undip’s popularity based on the number of visits to the university’s website and the number of outside access to various sites under undip.ac.id domain. Besides the popularity of the official website, Undip is not solely relies on the interface of the site that is interesting and easy for visitors, but also from various social media owned by Undip such as Facebook, Twitter, LinkedIn, YouTube, and Instagram. In addition, Undip also has several facilities including Library, Housing, Sport Facilities, Financial Aids, Study Abroad, Distance Learning that support academic and non-academic activities at Undip. Undip is currently also partaking in the membership of the Association of Southeast Asian Institutions of Higher Learning (ASAIHL).