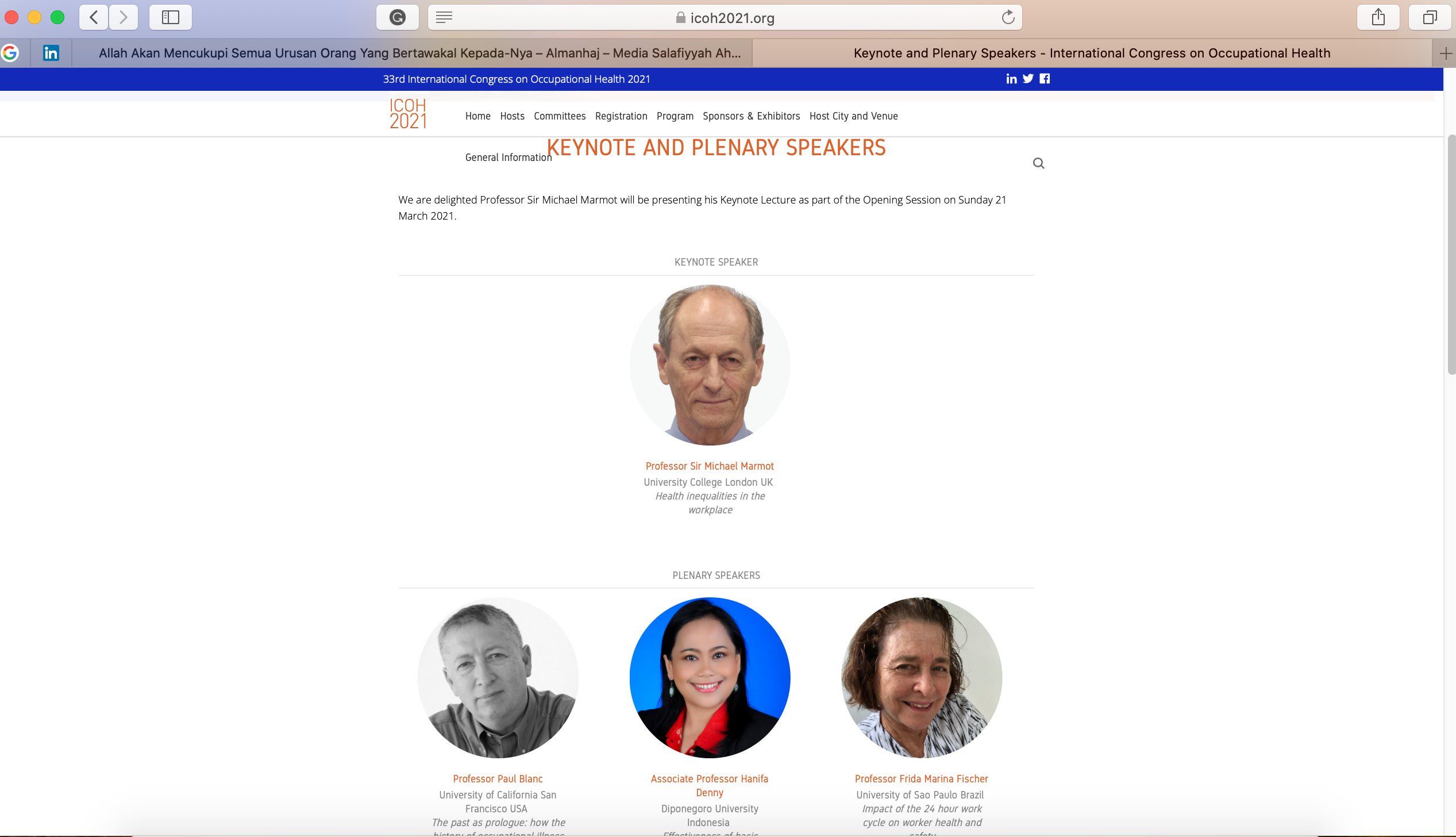 Hanifa M. Denny, SKM, MPH, Ph.D. invited as one of the Plennary Speakers at the ICOH Congress, Melbourne 21-26 March 2021. ICOH is the International Commission on Occupational Health which is a non-governmental professional organization at the international level that aims to encourage scientific progress, knowledge and development of occupational health and safety in all aspects. Founded in 1906 in Milan as a Permanent Commission for Occupational Health, ICOH is the place to join the world leading international scientific community in the field of occupational health with a total member of 2,000 professionals from 105 countries. ICOH is recognized by the United Nations as a non-governmental organization (NGO) and collaborates with the ILO and WHO. Among the various ICOH activities, the ICOG Congress is an activity that is held periodically every three years or “Trinneal” and is usually attended by more than 3000 delegates and even in some periods of the congress ever reached 5000 participants.

Hanifa, Lecturer and Dean of the 2015-2019 Period at the Faculty of Public Health, Diponegoro University, is one of the Occupational Health experts known in Indonesia and has actives in several countries. Hanifa has been involved in this field since the first time she was introduced to the Diponegoro University Public Health S1 program in 1988. Some achievements and dedication in the field of occupational health were inscribed, especially to fight for equal distribution of health efforts for workers in the informal sector and small to medium scale businesses. Her achievements as a consultant on occupational health at WHO, ILO and GTZ, brought Hanifa to actively participate as an expert who contributed to the foundation of the Directorate of Occupational Health at the Ministry of Health R.I. Starting in 2006 and later, she has been trusted by the Indonesian Ministry of Manpower to become a member of the National Occupational Safety and Health Council or DK3N for the 2017-2021 period. Consistently and continuously, Hanifa conducts research and community service in order to minimize the negative impact of pesticides on health due to unsafe use on the farm. In addition, mobilizing public participation in occupational health efforts through the initiation of the establishment of Occupational Health Efforts in several areas is Hanifa’s commitment and love as an activist in occupational health who also served as the Head of the Association of Public Health Professionals and Associates (PERSAKMI) from 2008 to 2017 with members reaching 3000 people based on SKM diploma.

Hanifa debuted at the international level for the first time after completing her S2 at Philippines and sending a paper to the 26th ICOH congress committee in Singapore in 2000. For beginners it is very meaningful to know that a thesis paper on the effects of pesticides on farmers and spontaneous abortion are accepted in oral presenter category. Continuation of the presentation led Hanifa to receive an offer as a WHO consultant and SIDA scholarship to attend OSH & D professional education in Sweden in 2002 – 2004 and received a summer school scholarship from DAAD to deepen Occupational Health Crossing Borders at Ludwig Maximillian University, Munich, Germany in 2012.

While pursuing a doctorate degree at United States with a DIKTI-LN scholarship, Hanifa was sent by the University of South Florida to present a paper on informal sector occupational health at the XIX World Congress on Safety and Health at Work, organized by the International Labor Organization (ILO), the International Social Security Association (ISSA) and the Ministry of Labor and Social Security of the Republic of Turkey, Istanbul, 11-15 September 2011. Various invitations continue to arrive from WHO to present research findings and consultancy work in the field of occupational health financed by WHO and the Indonesian Ministry of Health, she also invited by the Institute of Medicine as speakers in Washington DC and APEC Meeting delegates in Peru in 2016 to fight for the health and productivity of women workers.