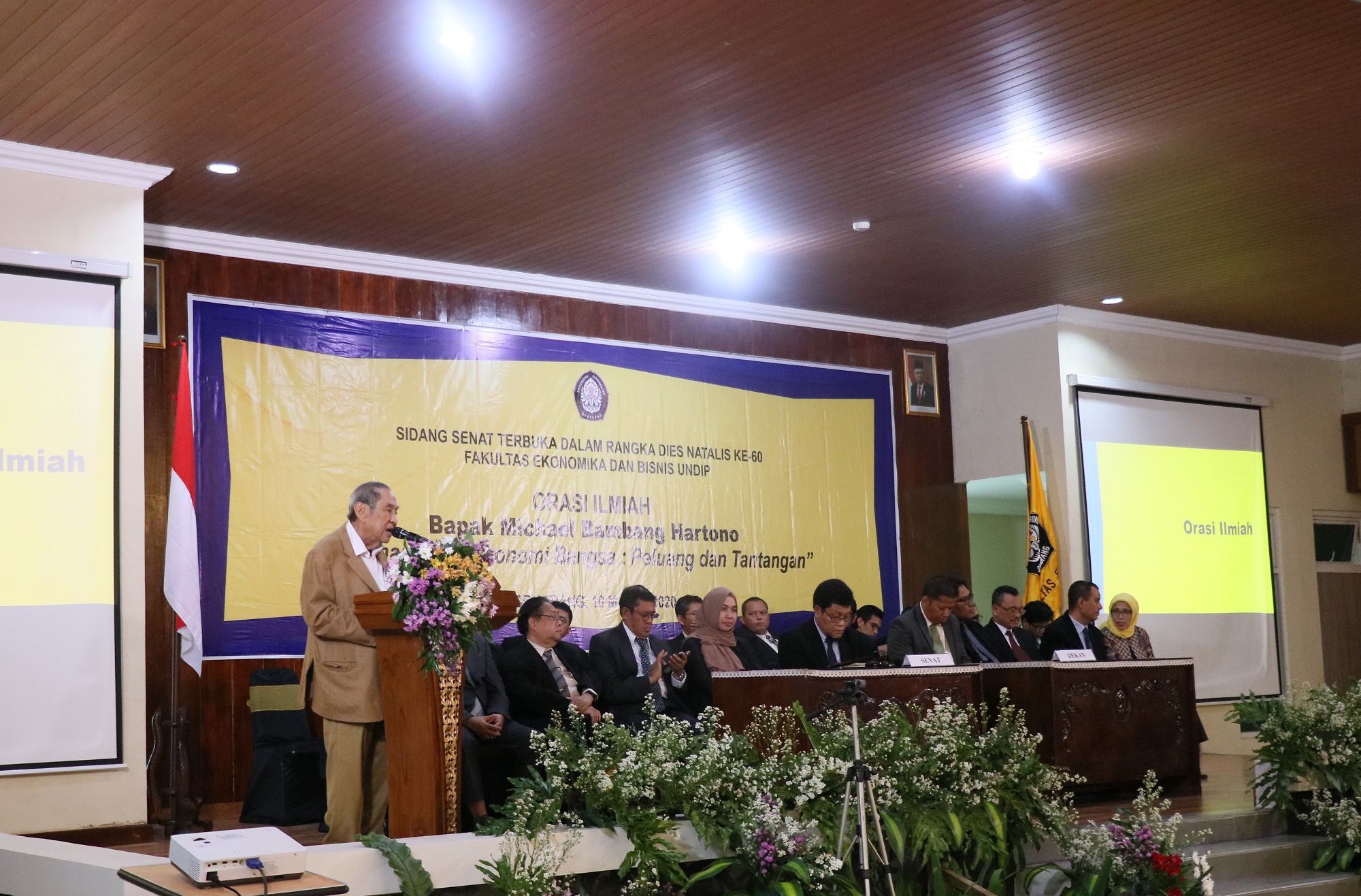 In the occasion of 60th Anniversary, the Faculty of Economics and Business Undip invited Michael Bambang Hartono to Scientific Oration held on Tuesday (10/3) at the Undip Entrepreneurship Hall. The event was attended by Undip Rector Prof. Yos Johan Utama, Dean of FEB Dr. Suharnomo, and the speaker Michael Bambang Hartono.

In his remarks, Undip Rector Prof. Yos Johan Utama said that the key to the advancement of Indonesia’s economy is harmony. With the PTNBH entity, Undip must be ready to face the challenges of the digital era by way of being independent, and one of the faculties in the surplus category is FEB. The Rector said that in the future non-classical lecture methods would be established under the name UDID University Digitally Diponegoro. “Speed and accuracy are the main keys in facing the challenges of digital age,” he said.

Furthermore, as the opening speech, Michael Bambang Hartono said “only with quality education can we compensate for the progress of other countries. “We have provided hardware, the next step is for campus to design the software, namely the skills and quality of students that supports Undip as a world-class,” he added.

In his scientific oration, Michael Bambang Hartono explained that in the last few decades Indonesia have experienced a very significant economic leap. He said that the development of Indonesia’s economy experienced an increase / surge in the economy, by looking at the indicators of the world best airport in 2019, which was ranked 40 as the busiest airports in the world. This can attract foreign investors to transfer their stock to Indonesia.

“The whole leap in economic development has an impact on increasing the income per capita level of Indonesian citizens,” he said.

Michael Bambang Hartono is one of the owners of the Indonesian kretek cigarette company, Djarum. Michael and his younger brother, Robert Budi Hartono, inherited Djarum after their father, Oei Wie Gwan, whom was died in 1963.

Meanwhile, Dean of the Faculty of Economics and Business Dr. Suharnomo, S.E, Msi. said that it is hoped that the presence of Michael Bambang Hartono could provide experience and motivation for FEB students. At its 60th anniversary, FEB have released 4 new professors and 130 international journals, FEB also had an international class that graduated the students with double degree who contributed in margins to the nation.

On this occasion, Dr. Suharnomo also conveyed that FEB already owns a Bloomberg lab. Hopefully at the age of 60, this FEB Undip can inspire more and more alumni to be more active in the national and international arena. FEB has been preparing to face the industrial revolution that is planning to open new study program focused to release entrepreneurs (job creators) next year.