Robot Aid for Graduates Liven Up the 159th Undip Graduation 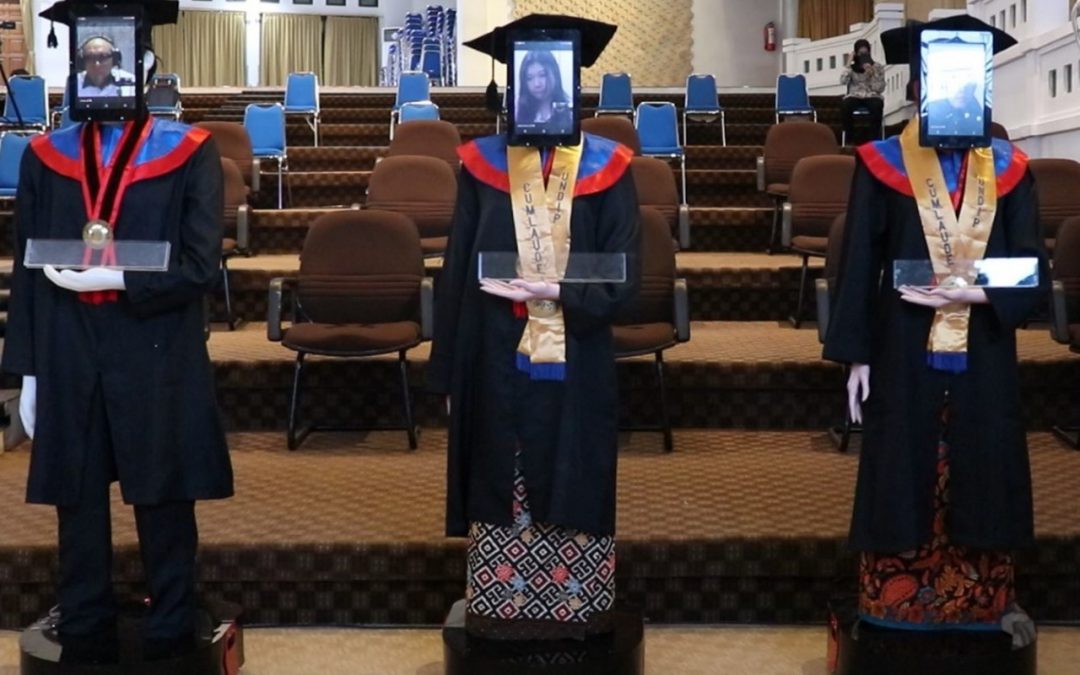 SEMARANG, UNIVERSITY OF DIPONEGORO – The 159th Graduation of Diponegoro University on July 27-30, 2020, which was held online, presented a robot for the graduation of graduates. This robot replaces the physical presence of the graduates who were unable attend the graduation event due to a number of Covid-19 pandemic policies in an effort to prevent transmission of the corona virus.

The height of the robot was adjusted to the average height of Indonesians in general, which was 160 centimeters. This robot stands on a box equipped with wheels and a driving machine with power derived from dry batteries (accumulator battery). To run the robot back and forth as well as spinning, it utilized a remote control that can be controlled from a distance of up to 15 meters.

“The 159th graduation carries the theme of robotics. We not only present a robot action display for the graduation of the graduates, but also presenting a presentation on Diponegoro University’s research and innovation achievements, especially under the Undip Science and Technology Research Center for Health Technology. One of them is in the field of robotics by developing bionic hands which have been used by many users, including by Indonesian workers in Korea. Undip also developed a medical robot to help medical staff treating Covid-19 patients. And on this graduation ceremony, Undip has presented a robot displaying the graduates to enliven the online graduation ceremony, “said Dwi Cahyo Utomo, SE., MA., Ph.D as Plt. Vice Rector for Communication and Business.

The robot exhibitors will act as representatives of the three best graduates in each faculty. The three best graduates represented by robots will receive a diploma directly from the Rector and shake hands with the Rector and the Dean. Robotic action can be witnessed at each stage of the graduation ceremony. The 159th graduation was attended by 2,561 graduates who were divided into 11 phases. 27th to 29th will be 3 phrases each, except for July 30 it will be held only 2 stages. Phase 1 starts at 08.00 WIB, phase 2 2 starts at 11.00 WIB and phase 3 starts at 14.00 WIB. Each phase is estimated to take 2 hours.

In the 159th graduation there were 2 foreign students named Hasan Ali M Ali from Libya from the Environmental Sciences and Kagiraneza Alexis Fidele from Rwanda from the Information Systems Master Study Program. Both were listed as graduates at the Diponegoro University Graduate School. The 159th graduation was the second online graduation held by Undip. The first online graduation was held at the end of June 2020. This graduation is currently broadcasted online from Prof. Soedarto SH Building, Tembalang Campus, and can be watched through the official Undip TV YouTube channel on Monday to Thursday, July 27 to 30 2020 at 08.00 WIB – finished.