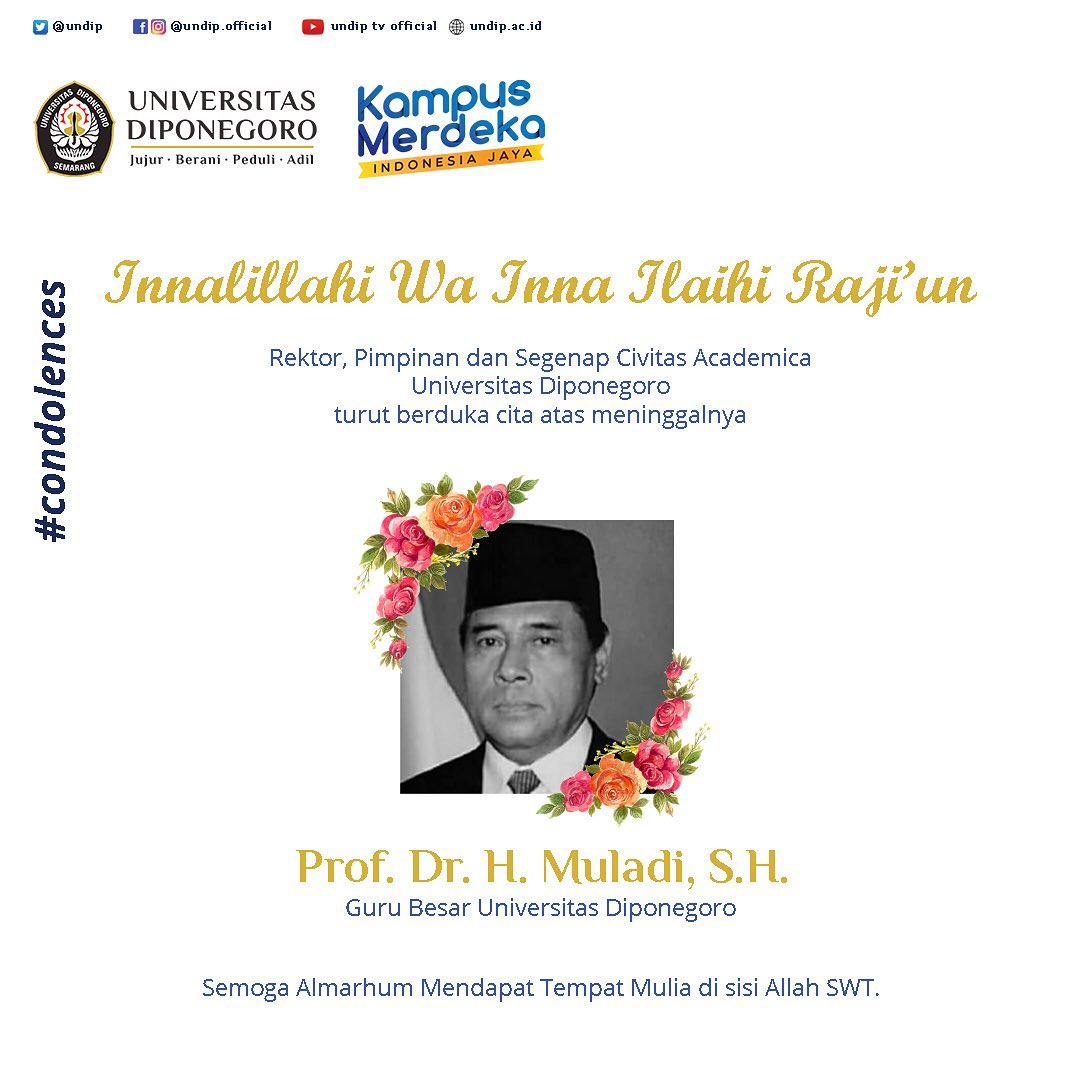 Diponegoro University is grieving the loss of one of the best professors from Faculty of Law, named Prof. Dr. H. Muladi, SH. He died at the age of 77 in Gatot Soebroto Army Hospital, on Thursday 31th December 2020 at 6:45 AM. He was born in Surakarta, Central Java on May 26th 1943. His Bachelor of Law (Criminal Law) degree was obtained from Diponegoro University in 1968. When he was a student, he was active as a member of Indonesian National Student Movement (Gerakan Mahasiswa Nasional Indonesia) in 1963-1968. He was also active as Commander of Battalion IV, Semarang Student Regiment in 1964-1967.

As a Professor, Muladi has been actively teaching at several State and Private Universities in Central Java and Outside Central Java (UNDIP, Ul, UBAYA, UNILA, UNSRI, Pancasila University, UNPAD, PTHM, PTIK and others), since 1990. He was also a Advisors/Lecturers of Indonesian Police Academy in 1990-1995. As a criminal law expert, Muladi was active in writing, counting ten books in the fields of Criminal Law, Criminal Justice System and Human Rights. He also has submitted hundreds of Seminar Papers at home and abroad. The highest peak of his career in Diponegoro University is being trusted to be Rector of UNDIP for the period 1994-1998.

He was very active and holding strategic positions in several institutions and organizations, such as Members of MPR RI from Regional Delegation Faction in 1992-1994, Secretary of Adhoc II Committee of MPR RI Worker Body in 1997-1999, Deputy Chair of Law Enforcement Council and National Security System in 1998-1999, Member of Komnas HAM in period 1993-1998, and several others.

Because of his achievements and dedication, Muladi received many awards, including Class II Mahaputra Adi Pradana Star from the President of the Republic of Indonesia and Bintang Bhayangkara Utama award from the Indonesian President Susilo Bambang Yudoyono in 2006.

Current Diponegoro University Rector, Prof. Dr. Yos Johan Utama, S.H., M.Hum. would like to express deep sorrow for the passing of one of the best Undip professors, the late Prof. Dr. H. Muladi, S.H. “He is not only a teacher, but also a role model for us,” said Prof. Yos. “His strong voice in standing up for justice and law enforcement reflects his dignity and care for others,” Prof. Yos said. “As a legal criminal expert, Prof. Muladi gives his best in dedication of enforcing the law and draft legislation to protect human rights,” he added. “Hopefully the late Prof. Muladi is in Husnul Khotimah and gets the best reward from Allah for his charity and dedication to the family, institutions and the country,” he concluded.

The funeral of the late Prof. Dr. H. Muladi, S.H. will be carried out in Giri Tunggal Garden Tomb of Heroes Semarang, on Thursday, December 31st 2020.