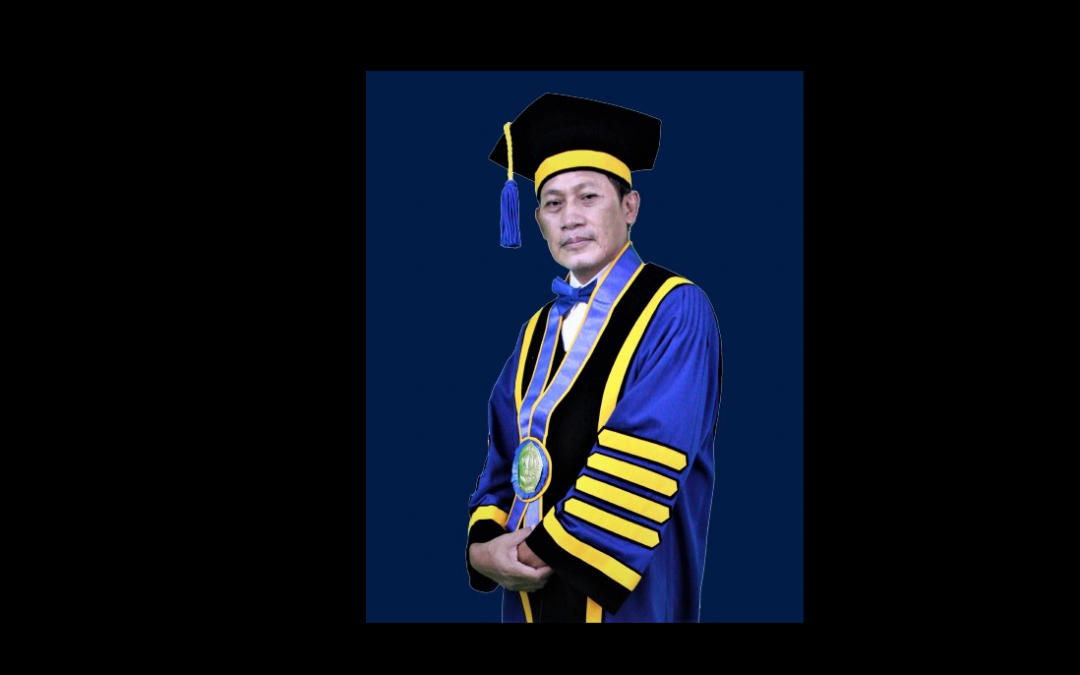 SEMARANG — One of the most common problems related to water resources in Indonesia is flooding. Prof. Suharyanto, Professor of Civil Engineering, Faculty of Engineering, Diponegoro University suggested a flood management concept that is appropriate to be applied in many rivers upstream with meandering (winding) through Horseshoe Detention Pool.

“Building a large dam is very complex. It is necessary to acquire land, pay attention to soil types and so on, while Horseshoe Detention Pool has a smaller scale, so that the community can also participate in its construction and management,” he said when delivering his scientific speech entitled ‘Maintaining Water Resources Sustainability’ at Open Session of Undip Academic Senate, at Prof. Soedarto, S.H. Building, Undip Tembalang, Semarang, on Friday (4/6/2021).

This Doctor of Civil Engineering who is a graduate from Swinburne University of Technology Australia, describes how the detention pool works to hold water for a certain period of time while waiting for the right time to release it again. During a flood, the water is diverted to the detention pool so that the load of water entering the main river is reduced. “The more detention pools there are, the greater the water load that causes prevention of flooding,” said the man born in Yogyakarta, September 14th 1963.

Horseshoe Detention Pool is a storage infrastructure in the form of a horse shoe detention pond which is very appropriate to be built on the location of meander soil. Meander soil in the form of a horseshoe is usually unstable and continuously experiences problems with erosion or scouring of cliffs at the outer bend and sedimentation at the inner bend. The existence of Horseshoe Detention Pool is able to reduce flood, inhibit the peak time of flooding, and even open up opportunities for the use of water for local purposes.

“We have developed Horseshoe Detention Pool in Grobogan, an area that is prone to flooding but has difficulty in building large dams because the land needs to be acquired and the soil conditions are not good to be used as foundations for large buildings. We develop Horseshoe Detention Pool in unfavorable land. Since the scale is small, community groups can also develop it in their respective regions,” said the Head of Civil Engineering Masters Study Program of Faculty of Engineering Undip as well as Coordinator of Cooperation Class with the Ministry of Ministry of Public Works and Public Housing.

Suharyanto, who finished his bachelor studies at Gadjah Mada University in 1987 and masters studies at Manitoba University, Canada in 1992, did a lot of research on the Lusi River, which has high sedimentation and alluvial soil, as well as low carrying capacity. The condition of the soil of Lusi River are commonly found in Indonesia.

The problem of managing water resources, according to Suharyanto, consists of 5 (five) main problems, namely too much, too little, too dirty, too far, and untimely. These problems are often referred to as hydro-meteorological disasters such as floods, landslides, and droughts. In Indonesia, problems related to water continue to occur anually, and it indicates that the management of water resources has not generate the best results.

These five problems can be related to the management principle in Law No. 17/2019 concerning Water Resources, which must be carried out in an integrated manner between the management pillars in forms of conservation of natural resources, utilization of water resources, and control of the destructive power of water supported by participatory principles and information systems of water resources. Considering that natural resources has no administrative boundaries, it flows from upstream to downstream, and involves the livelihood of everyone, thus integrated efforts must be done. The efforts are carried out starting from planning, construction, operation-maintenance, monitoring-evaluation, and feedback by prioritizing integration between relevant stakeholders, between regions, between upstream and downstream, in collaborative manner and balanced development of environmental sustainability, without compromising the rights of future generations.

Thus, several cooperation and coordination forums such as Coordination Team for Water Resources Management (Tim Koordinasi Pengelolaan Sumber Daya Air / TKPSDA), National Movement Partnerships for Water Saving (Gerakan Nasional Kemitraan Penyelamatan Air / GNKPA), Indonesian Water Resources Network (Jejaring Sumber Daya Air Indonesia / JSDAI), are important to continue to be developed to the micro level. He assessed that the existing cooperation forums are still at the decision-making level. “We need a forum for cooperation and coordination at the operational level in fields and. The units need to be established on the micro level because the micro level is the spearhead of successful integrated water resource management,” explained the Most Outstanding Lecturer of Faculty of Engineering Undip in 2000.

One of efforts of all the management pillars (conservation of water resources, utilization of water resources, and control of the destructive power of water), is the construction of storage infrastructure which is built in a participatory and micro scale. Thus the problems of too much, too little, too far, and untimely water can be managed by providing, managing and operating storage infrastructure in appropriate way.

This father of three children has the principle that when you are in a place, you must reach the highest peak. As a lecturer, I try to achieve the maximum results of studies. “I feel that the joy of being a professor is not only my personal and family’s happiness but it is more than that. Many of my fellow lecturers, students and government colleagues are also proud and happy that I have succeeded in becoming a professor,” said the husband of Umi Hardaningsih Amd whose master’s thesis analyzed Brahman River in Bangladesh.

He hopes that what he has achieved can be an encouragement and inspiration for other lecturers. “Hopefully it can provide greater benefits with the mandate as a professor,” he said. (PR team)