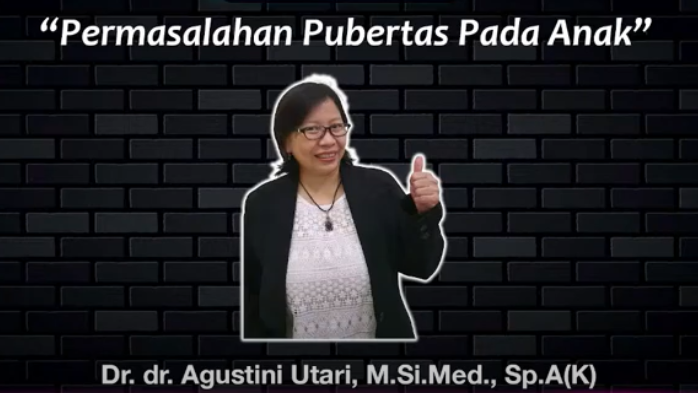 Puberty is a stage of growth in boys and girls that will happen sooner or later. Puberty in children is a transition when their bodies grow and change as adults, one of the signs is physical changes. As parents, this period is a challenge on the role of parents to help them during these times.

“Puberty is a period of transition from child to adult and this is an important transition of human body. Puberty is strongly influenced by hormones or a substance produced by the body and will affect various organs in the body. For girls, puberty occurs on average starting at the age of 10-11 years, while for boys at the age of 11-12 years,” said Dr. dr. Agustini Utari, M.Si.Med., Sp.A(K), Pediatrician at Diponegoro National Hospital of Diponegoro University.

“We will recognize early puberty and late puberty, early puberty means puberty before the age of 8 years for girls or before age of 9 years for boys. The signs of puberty in girls, starting with the growth of breasts and rapid growth in height and then the appearance of pubic hair, armpits, and body odor. Meanwhile, boys start slightly later than girls, starting with enlargement of the testicles, growth of pubic hair, the appearance of Adam’s apple, changes in voice, growing mustache and so on. This should not happen before 9 years, if it starts less than 9 years in boys and for girls less than 8 years old there are signs it is called early puberty. Early puberty can be a sign of disease, or there are abnormalities in the reproductive organs, for example there are cysts in the ovaries or there is an abnormality in hormone regulation in the brain, including tumors in the brain. So, parents need to pay attention if there are abnormalities related to puberty, so the children must be immediately taken to the doctor,” explained dr. Augustini.

Puberty is sometimes not realized whether it is normal or not, so what is needed is parental observation. In the period of growth and development, parents need to look at, for example is the height, if children reach puberty faster, they will be taller than their friends,” he continued.

According to dr. Agustini, the cause of early or late puberty need to be found and can be controlled with treatment. Late puberty is much influenced by chronic disease factors, but it can also be due to other disorders, such as Turner Syndrome in girls who are late and short of puberty. Treatment depends on the underlying disorder and it is necessary to induce puberty for the late ones. For early puberty, the children need to avoid some various of foods or things that contain the hormone estrogen or testosterone. Treatment also depends on the cause so that puberty can be prevented from continuing.

“Basically, puberty is a period of transition from child to adult, where there are physical changes in both girls and boys. We should really observe these changes and parents need to pay attention to the changes, when they occur. We say that a child has early puberty if the signs of these physical changes have occurred at less than age of 8 years in girls or less than age of 9 years in boys. Moreover when physical signs do not appear at the age of 13 years or more in girls and 14 years in boys, we need to take them to the doctor to see if this is a normal or abnormal pubertal development. These must be noticed carefully so that in the future we will get optimal growth and development results for children and adolescents. (Linda – Public Relations)