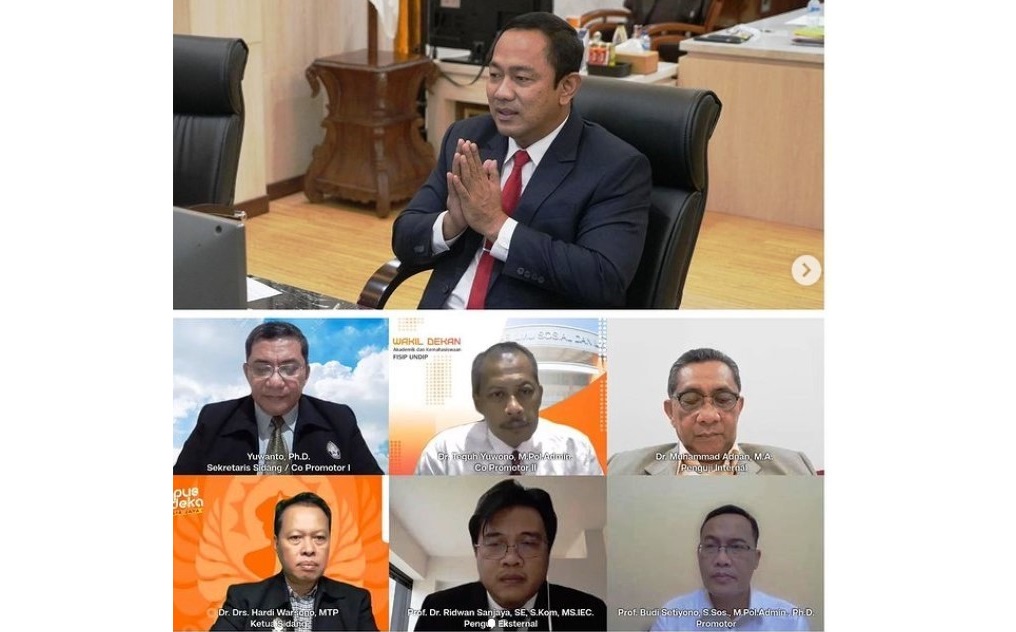 SEMARANG – Mayor of Semarang City, H. Hendrar Prihadi, SE, MM has just completed his doctoral program after attending a doctoral promotion session at Faculty of Social and Political Sciences of Diponegoro University (UNDIP), on Wednesday evening (29/9/2021).
The Mayor of Semarang who served for the two periods graduated with a cum laude predicate. Hendrar Prihadi, who is familiarly called Hendi, carried a dissertation entitled “Semarang Smart City Governance Model”.
The man who was born in Semarang on March 30th 1971 stated that the title of this scientific work is based on the conditions of urban problems and challenges in today’s global era. The challenges exist including in the city of Semarang.
From the existing problems and challenges, Hendi initiated to look for smart solutions and smart concepts. Hendi observed the implementation in big cities in Indonesia and the results were very diverse and varied. A question arises, how about in Semarang City?
From there, Hendi evaluated the smart city model of Semarang and then had the idea of reconstruction of Semarang smart city. Based on his analysis, then he led a research in Semarang with title of “Semarang Smart City Governance Model”.
His research resulted five objectives described in the study. The objectives are analyzing the aims of Semarang Smart City Governance Model; analyzing Semarang Smart City Governance Model before and after being declared by the Mayor in 2013; analyzing the factors that support the implementation of the Semarang Smart City Governance Model for the 2013-2020 period; analyzing the current conditions and new factors for the development of smart city governance in the future; and reconstructing Semarang Smart City Governance Model in accordance with the demands of changing city development in the next five years.
“Based on the results of qualitative study, the idea of Semarang Smart City Governance Model appears can be used for smart city models in local governments (in cities or districts) in Indonesia, including in Semarang City,” Hendi wrote in Chapter VI page 339.
Hendi also explained that the findings and results of the discussion in this study can be used to determine the assessment of Semarang Smart City Governance Model and its determinants. The important point of the results of this reconstruction is that it is unique or different from other models.
“Semarang Smart City Governance Model can answer big questions about urban problems. It can also be an option to solve urban strategic issues according to Regional Medium Term Development Plan in the Milestone of Regional Long-Term Development Plan. This is a way to resolve strategic issues by utilizing information technology and new program innovations according to local wisdom and following existing regulations. The results from various assessments of many parties are declared as good,” he explained.
Furthermore, in the implementation of the Semarang Smart City Governance Model, seven influencing factors were found. These seven factors are also supported by various literatures of Smart Cities and strengthened by various interviews with Smart City experts.
The seven factors are Leadership, Public Policy, E-Government / Electronic-Based Government System, Institutional Relations, Community Social, Stakeholder Interaction and Religious Aspects.
Hendi admitted that the doctoral education in social and political sciences that he took was part of refreshing himself. Since every day he always meet the community, he feels forgetful with new insights and knowledge.
“In the morning, afternoon, evening and night, my daily routines are meeting the community. Sometimes I feel like I do not get new insights. So, I think this study refreshes myself,” said Hendi, who has been taking doctoral education since 2018.
The husband of Krisseptiana said that the education he took was to increase his insight and knowledge. He hoped that the knowledge gained can provide benefits to the community.
“Hopefully my dissertation on implementation of Semarang Smart City will provide benefits,” he said.
During his leadership, Hendi has also made various efforts to realize Semarang City as a smart city. The benefits of these smart city-based programs are felt by the community. For example, the reporting system of LAPOR program created by Hendi.
The program makes it easier for the community and the issues can be handled quickly. Online licensing and population administration have also been implemented. The installation of CCTV in every village is also part of supporting Semarang as a smart city.
Meanwhile, in the doctoral promotion session for the Mayor of Semarang, several lecturers of Undip presented including the Internal Examiner, Dr. Muhammad Adnan, M.A; External Examiner, Prof. Dr. Sanjaya, SE, S.Kom, MS.IEC; Promoter, Prof. Budi Setiyono, S.Sos., M.Pol.Admin., Ph.D; Session Secretary / Co Promoter I, Yuwanto. Ph.D; Co Promoter II, Dr. Teguh Yuwono, M.Pol.Admin; and Chair of the Session, Dr. Drs. Hardi Warsono. MTP. (PR Team)
Translated by: Titis (Public Relations)
Share this :