Message from the Rector of UNDIP in the 165th Graduation: Prevent Lost Generation by Becoming a Golden Generation Equipped with Faith and Optimism 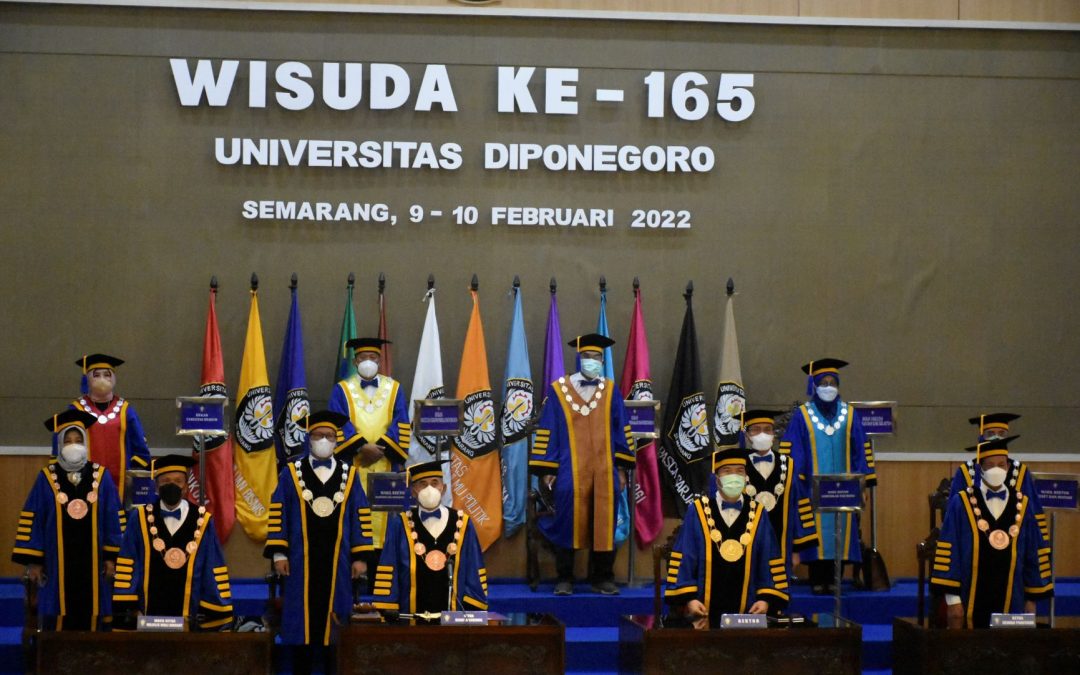 “Congratulations to the students on their successful completion of their studies at Diponegoro University. We should be grateful for the presence of God Almighty because the graduated students were selected from hundreds of thousands of people who want to become Undip students, considering the very tight selection every year. In SNMPTN path, Undip placed in second position of higher education in Indonesia that has the highest participants in 2020 and in sixth position in 2021. In addition, Undip is one of the best universities in Indonesia with an excellent reputation both nationally and internationally,” he said.

Undip Rector said that Undip has an A accreditation rating and several study programs are accredited at international institutions such as study programs at the Faculty of Economics and Business, Faculty of Law, Faculty of Humanities, Faculty of Public Health, Faculty of Medicine, and Faculty of Engineering. Undip has proven its quality to occupy the first position nationally as a university whose alumni are the quickest to get jobs. The undeniable achievement of Undip shows that the quality of education at Undip is the best at the national level so the job market recognizes it.

At the overall governance level, Undip has proven to be the second best university in achieving Key Performance Indicators. The achievements of lecturers and students in the national and international levels are unquestionable, including alumni occupying various highest positions in their respective fields, from ministers, attorney generals, ambassadors and others. Undip is trusted as independent organizers in the field of research because its research products are proven excellent and this is in accordance with Undip’s vision as an excellent research university.

Furthermore, Prof. Yos said that many parties predict that the current generation that gets virtual education, and is limited in their socio-cultural and religious relations as a result of the COVID-19 pandemic, is categorized as a lost generation. A term originally coined by Gestrude Stein and popularized by Ernest Hemingway to describe a generation at the time of World War I between 1914-1918. They are said to be a lost generation because they do not get a normal social life and it’s even more sad because of the war.

“In the end, according to their expectations, this generation will have the characteristics of a generation that has lost hope, lost in faith and feel despair both in current time and in the future. In fact, many people predict that this generation will become a solitary and less tolerant generation, due to limited interaction with the community. This pessimistic perspective must be rejected, because apart from our faith in God Almighty who always teaches optimism and good prejudice, we also have historical experience that the Indonesian nation is a strong nation and is resistant to all changing times,” he stated.

“Indeed, we cannot deny that a sudden change of the industrial revolution 4.0 and disruption era as well as the shock of the world with COVID-19, has changed the social order. However, the fear of a lost generation can be overcome by strengthening faith with the support of family as the main pillar in the moral development of the current generation. For the graduates, don’t be sad, don’t need to worry too much, and don’t be confused about the current conditions. Keep thinking positively and strengthen your faith, hopefully God will always provide the best way for you in pursuing a career in the future,” explained the Rector.

“Remember that you are studying at Diponegoro University which is encouraged by the spirit of Prince Diponegoro, Honest, Fair, Courageous and Caring. You have received a lot of knowledge while studying here so don’t hesitate in your steps, always instill in yourself that you are part of a golden generation who are ready to take on a role at the global level. Once the sail is raised, you can’t back off anymore. Ever forward, never retreat,” he concluded. (Lin – Public Relations)