Introduction to Culture (Cultural Excursion) for Undip International Students in 2022 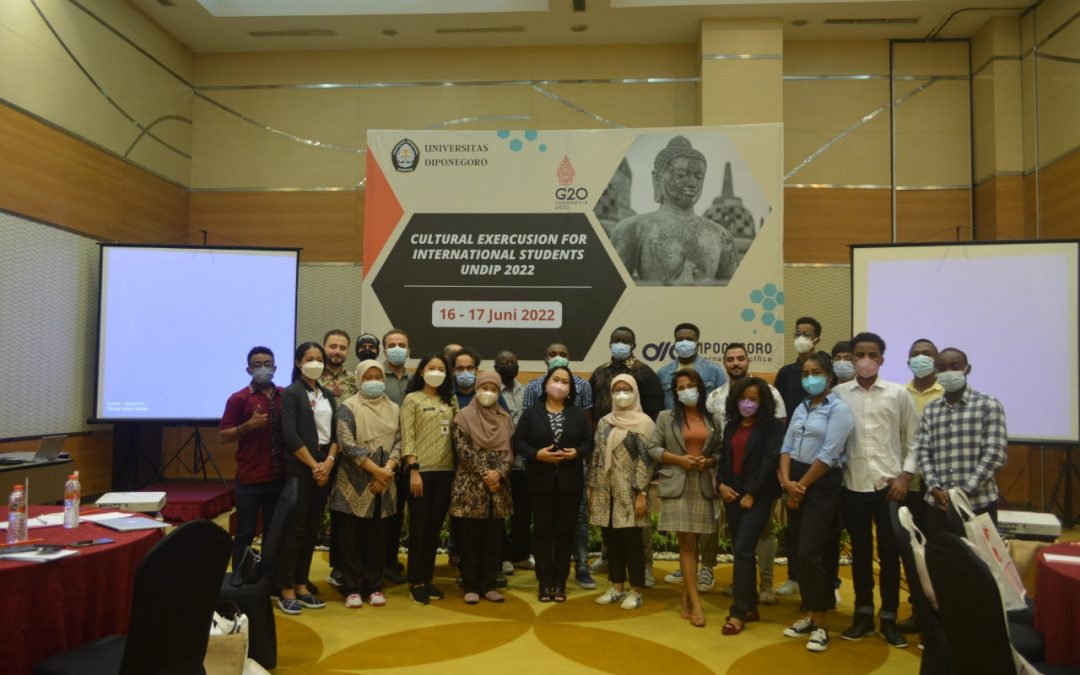 Continuing to study abroad is an extraordinary experience that is beneficial in shaping global character and mindset, where exploration is needed to gain insight into cultural diversity. With this aim, the International Office (IO) of Diponegoro University (Undip) carried out the “Cultural Excursion for International Students of Diponegoro University 2022” on Thursday and Friday, June 16-17, 2022, in the city of Magelang. A total of 33 international students with the status of Undip students participated in this event, including from Jordan, Palestine, Madagascar, Yemen, Sierra Leone, Tajikistan, Rwanda, Turkmenistan, Afghanistan, Italy, Egypt, Philippines, Myanmar, Syria, Gambia, Somalia, Pakistan and Timor Leste. In these two-day activities, Undip international students will be introduced to Indonesian culture, especially culture and tourist destinations in Central Java.

In his speech representing the Undip Rector and Undip Vice Rector I, Hanifa Maher Denny, S.KM., MPH., Ph.D. explained about the noble values of Prince Diponegoro, including fighting for goodness and doing good to others. The opportunity to study in Indonesia allows us to know about the various races, ethnicities, and religions in Indonesia, thereby teaching us about diversity and tolerance for one another. “As humans we have to respect each other, that is the key to success. Always obey the rules wherever you are. Here we learn as well as recharge energy, be grateful and have fun,” said Hanifa.

The second speaker, a representative from DISPORAPAR Central Java, Suci Baskoro Wati, S.S., M.Bus presented material with the theme “The Enchantment of Tourism in Central Java”. Suci Baskoro introduced the destinations of natural tourism, religious tourism, cultural tourism, and culinary tours in various cities in Central Java to Undip international students. There are hundreds of tourist destinations in Central Java that can be visited and the prices are relatively affordable. “There are also many cultural festivals that are regularly held every year, for example Semarang Old Town Festival, Solo Keroncong Festival, Cheng Hoo Festival, Dieng Culture Festival, Indonesian Umbrella Festival, and many more,” said Suci Baskoro.

Next, Diastama Anggita Ramadhan, S.H., LLM explained about “Living in Indonesia Cross Cultural Understanding: DOs and DON’Ts”. Diastama gave a general introduction to Indonesia, including the ease of access to transportation in Central Java, which has facilities including international airport, domestic airports, train stations, toll roads, and ports. Then the Deputy Head of IO Undip also explained the habits of the Javanese people who like to be friendly, which are characterized by smile, welcoming, greeting, polite/respectful), and well behaved. Where the earth is stepped on there the sky is upheld, so we must conform to the norms that apply to the places we visit. “We also have to be polite in dressing, wearing batik clothes in semi-formal and formal events can be made a habit,” said Diastama.

The event continued with a discussion session where international students shared their unique experiences while living in Indonesia. They also shared stories about the differences in the habits of the Indonesian people and in their home countries, which certainly adds to our insight into the diversity of cultures in the world.

The second day, Friday, June 17, 2022, Undip international students visited one of the famous tourist destinations in Central Java, namely Prambanan Temple which is located on the border of the cities of Klaten and Yogyakarta. Guided by a tour guide, Undip international students were introduced to the history of the ancient Mataram kingdom, which had been around since the 9th century.

Through these cultural excursion activities, Undip hoped that Undip international students can get to know Central Java more and enjoy more time while living in Indonesia. “This year we can again hold cultural excursion activities after a two-year hiatus due to the pandemic. Hopefully this trip will give a good impression and experience for international students. We hope that they can learn to appreciate what is around them and also be tolerant of others,” said Anggun Puspitarini Siswanto, S.T., Ph.D. as the Head of IO Undip. (Titis – Public Relations)