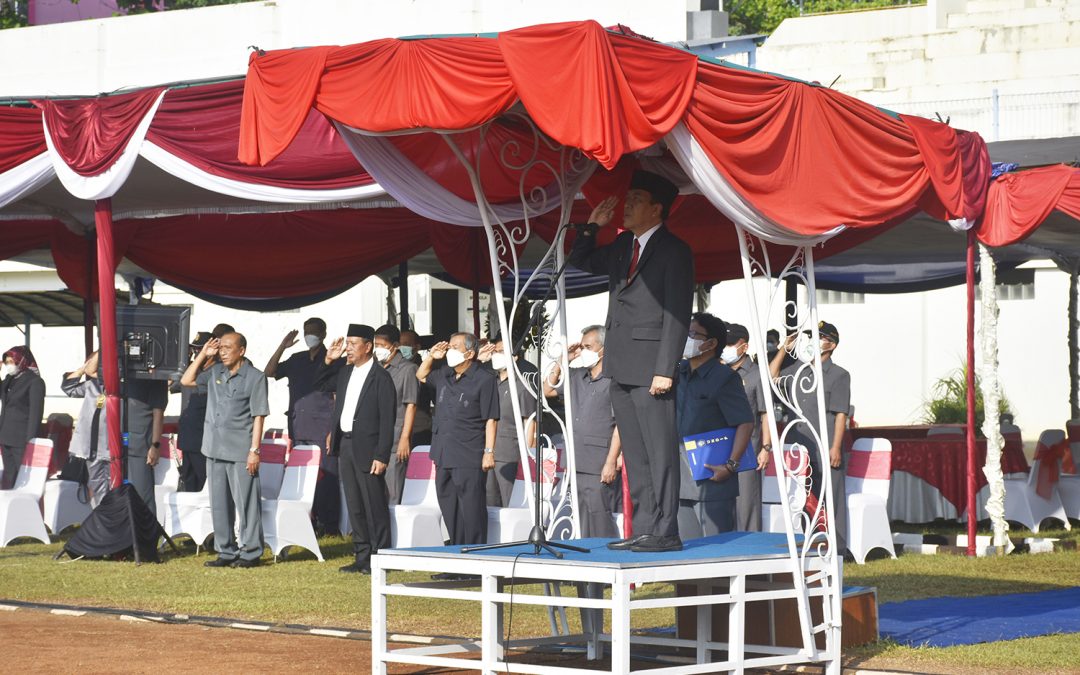 Undip Rector, Prof. Dr. Yos Johan Utama, S.H., M. Hum. as the Advisor of the Ceremony delivered the Speech of the Minister of Education, Culture, Research, and Technology (Mendikbudristek), Nadiem Anwar Makarim. In his speech, Nadiem said that the struggle for independence has been recorded in history. We cannot stop moving and walking. Especially this year, we commemorate the 77th Anniversary of the Independence of the Republic of Indonesia in 2022 with the spirit of “Recover Faster, Rise Stronger”.

We are currently proving this spirit together through the G20 presidency in 2022, with the Ministry of Education, Culture, Research and Technology playing a major role in fostering global collaboration to work together to restore and revive the education system.

We have given an example to the world how the learning process in Indonesia is currently more in favor of students and frees teachers to be creative in teaching through the Merdeka Curriculum and the Merdeka Mengajar platform. We have provided evidence that efforts to expand access to quality education can be carried out through a breakthrough in the School Operational Assistance (BOS) mechanism and various scholarship support programs. We have also convinced the world that the young generation of Indonesia has been trained in the world of work and social life, equipped with the provisions which have been obtained since they were in college through various off-campus learning programs that are gathered in the Merdeka Campus.

The Minister of Education and Technology, through a speech read by the Rector, congratulated the 77th Anniversary of the Independence of the Republic of Indonesia in 2022 for all levels of Indonesian society. Especially for educators, education staff, and students throughout the country. “Let’s continue our mutual cooperation to restore and awaken an independent Indonesia, to realize Merdeka Belajar”.

Furthermore, Prof. Yos stated that Undip was always in the top 5 favorite universities, even in SNMPTN in 2022, it was in the 2nd most favorite place.

“Undip in the future, a dashing and prosperous Undip depends on our efforts. I remember an inscription at the Central Java Sports Building which had the beautiful words ‘your glory in the future depends on what you do today’. So if we want Undip to be more glorious, luminous, based on rahmatan lil alamin, let’s start with simple things first, for example by establishing harmony with friends as a way in creating Undip to be a polite and lovely place,” concluded the Rector.

On this occasion, the awarding of honors and certificates of appreciation for Satyalancana Karya Satya was also handed out to Civil Servants (PNS) who have served for 10 or 20 or 30 years continuously by showing skills, discipline, loyalty and dedication so that they can be examples for other employees. Awards were also given to lecturers in the field of research and outstanding students at Diponegoro University. (Lin/Ut – Public Relations)