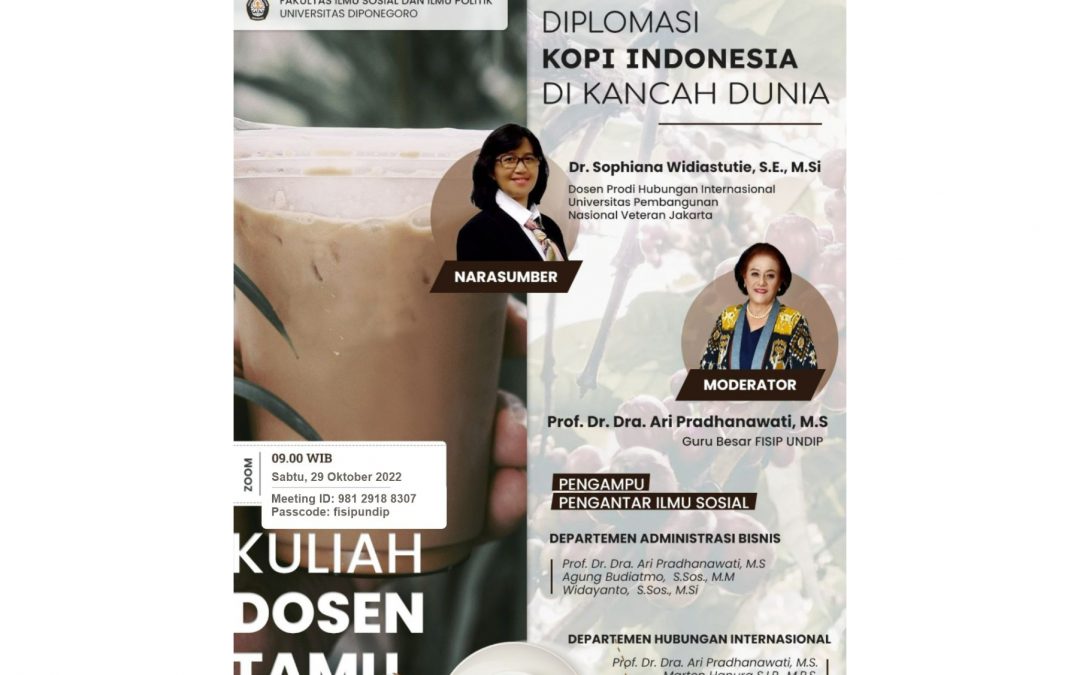 The Department of Business Administration and the Department of International Relations, Faculty of Social Science and Political Science, Diponegoro University held a Visiting Lecture with the theme of Indonesian Coffee Diplomacy on the World Stage, Saturday (29/10) with Dr. Sophiana Widiastuie, S.E., M.Si. (Lecturer of the International Relations Study Program at the Veterans National Development University, Jakarta) and moderated by Prof. Dr. Dra. Ari Pradhanawati, M.S. (Professor of FISIP Undip).

In her material Dr. Sophiana explained that in 1707 Governor Van Hoorn spread the distribution of coffee seeds to new areas such as Batavia, Cirebon, the Priangan area, and the northern coast of Java Island. Indonesia’s exports from Java to Europe beat coffee exports from Yemen. Even at that time Indonesia became one of the first coffee cultivation countries in the world besides Arabia and Ethiopia.

“Arabica is one of the most popular coffees in the world, including Sumatran Arabica, such as Mandailing and Gayo, Toraja Arabica, West Java Arabica, Balinese Arabica, Flores Arabica, and Luwak coffee,” she said.

Furthermore, Dr. Sophiana said, “The success of Indonesian coffee diplomacy in the world must be supported by maintaining the quantity and quality of coffee at every stage of the process. Coffee diplomacy carried out jointly or simultaneously by the government, business actors, and the community in their respective capacities and ways can create a more lively, informal, creative atmosphere, but provide tangible results for economic improvement and build a positive image of Indonesia.”

“The end result is the achievement of a larger national goal, namely increasing sales of Indonesian coffee commodities on the world stage, thereby providing benefits for the country and increasing the welfare of the community, especially coffee farmers and farm workers,” she concluded. (Lin – Public Relations)