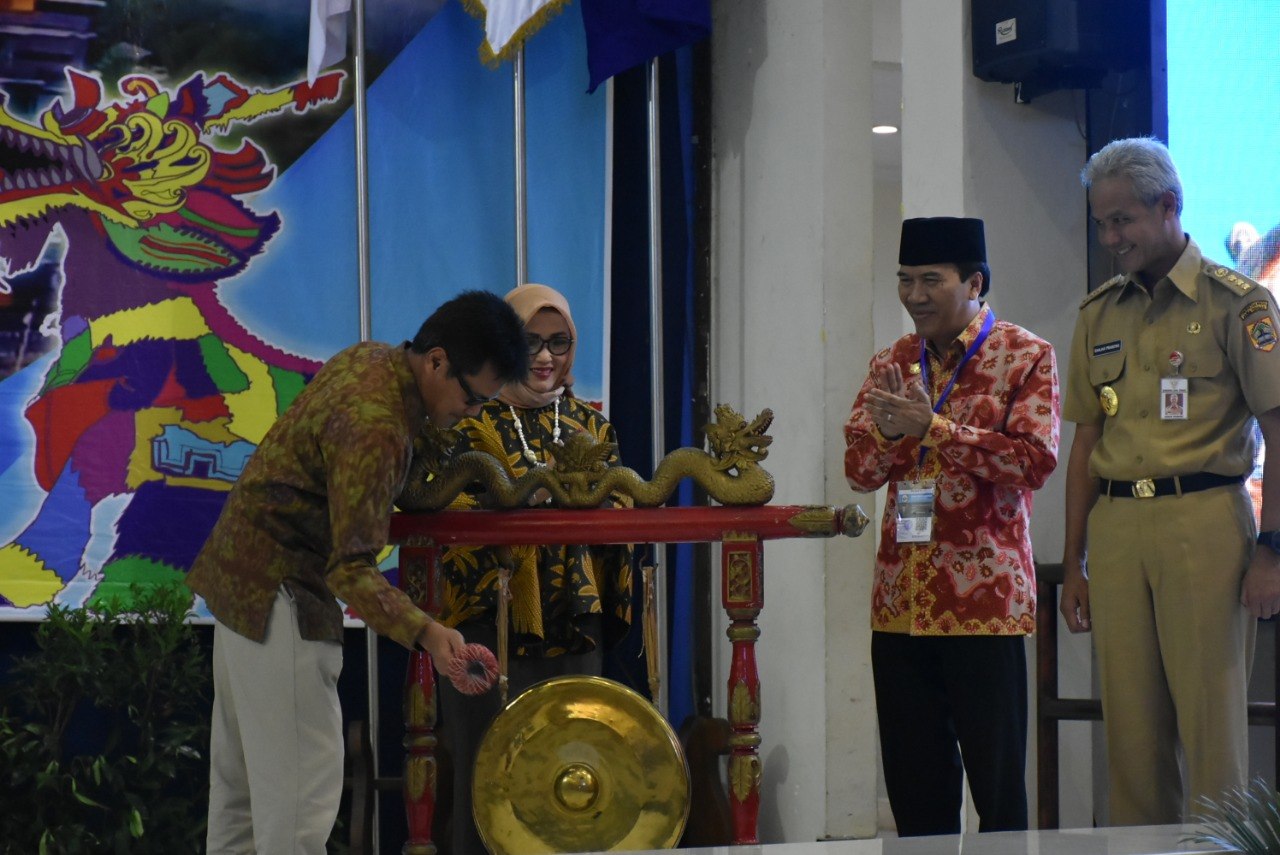 Diponegoro University (Undip) for two days successfully held the Indonesia Rector Forum (FRI) Conference 2019. The annual activity this time took the theme “The role of higher education institutions to realize equitable development and restructuring of universities to prepare the Indonesian golden generation”. The conference which was held on Thursday-Saturday (April 25-27) in the Prof. Soedarto building was attended by the rectors / leaders of state universities (PTN) and private universities (PTS) throughout Indonesia, and was opened by the Secretary General of the Ministry of Research and Technology, Prof. Ainun Na’im, Ph.D, MBA, represented the minister of Research and Technology who was unable to attend because there was an assignment from the president to China.

The written direction of the Minister of Research and Technology read out by Prof. Ainun in his opening speech, emphasizing that the leaders and Rectors of PTN / PTS must pay attention to the first few things, Organizing Online Education, which includes the Application of online learning systems through SPADA-Id REN; National online course development, curriculum reorientation; Development of new literacy based on data, technology, humanities; The development of extra-curricular activities is directed at developing leadership and working in a team work; Encourage students to become entrepreneurs, through the Kemristekdikti Entrepreneurship Grant Program; and Entrepreneurship and internship. Second, the importance of obtaining certificates other than diplomas (employability graduates). Third, the Scholarship Program for improving the quality of human resources. Fourth, Revitalization of Vocational Education is directed at strengthening competitiveness of vocational graduates. University-WCU Quality Improvement is carried out through intensification (superior tri dharma delivery and restructuring) and extensification (Internationalization capacity and resource enhancement). Finally, Science and Technology Capacity Enhancement & Innovation is directed to increase group research and research synergy, collaboration with world researchers for the theme of Industry 4.0 & Society 5.0.

Following up on the minister’s direction, the conference participants conducted a study in commission sessions. As for the recommendations of the commission meetings, Commission I which discussed the issue of Revitalization of Higher Education produced 5 points of recommendation, namely:

Challenges of Universities in the Industrial Age 4.0, related to changes in generations, society, lifestyles, industrial development and cultural change need to be addressed wisely prioritizing moral, religious and noble values ​​of Indonesian culture.

Encouraging the implementation of Entrepreneurial University, namely through the Initiating Start up Companies and Collaborative Research program (joint research between universities and industries supported by the government)

Increasing synergy between the Government; Universities and Business and industrial sectors

The Clusterisation of Universities is aimed at increasing competitiveness and towards independence through mapping, guidance and assignment by the Ministry of Research, Technology and Higher Education.

The need for institutions that bridge the results of research and innovation with users (industry, government and society)

The need for politics based on honesty, justice and the people is truly sovereign not as a political object, even a political victim.

The need to develop tradition gives awards to the former presidents of the Republic of Indonesia as a form of appreciation for those who have contributed to the progress of the nation and the country.

The need for law enforcement that is fair, indiscriminate and trustworthy, as well as the law that emphasizes honesty and must be based on the values ​​of Pancasila.

The need for the rule of law that strictly prohibits LGBT acts and practices (Lesbian, Gay, Bisexual, and Transgender). At least regarding the expansion of the meaning of zina in Law No. 1 of 1974 concerning Marriage, so adultery is not a relationship between men and women only but can be extended to same-sex. Given that the LGBT population in Indonesia is almost 1% of Indonesia’s population.

The need for strengthening education that fosters national identity based on honesty.

Meanwhile, Commission III, which was given the task to discuss economic studies and equitable development, produced quite a number of recommendations, namely:

The aim of achieving equitable growth is to provide a focus on overall economic potential, not partially in resolving Indonesia’s current economic strategic issues, namely the issue of poverty and economic inequality.

At the same time, the government must prepare mitigation of the impact of the industrial revolution 4.0 on labor issues, especially in sectors that are sensitive to digitalization.

Strategic changes to the industrial revolution 4.0 must be responded to by taking into account the socio-cultural impacts so that the digital economy era does not undermine Indonesia’s culture and local wisdom.

Furthermore, the potential of local culture and wisdom must be developed as a source of Indonesia’s economic growth with a downstream strategy by increasing the upstream sector.

So that the government builds an economy based on the market 33 of the 1945 Constitution, specifically related to the control of resources.

Commission IV, as a commission that examines the issue of realizing equitable development and preparing for the golden generation, produces several recommendations as follows:

Need to reconstruct parenting and character education in formal and informal education.

The need to emphasize character education into character (adab / ta’dhim) and social relations but still pay attention to the conditions of the younger generation today.

There needs to be a system or review of the credit system that is considered to burden students and lecturers so that there is a balance in the implementation of Tri Dharma which includes Education, Research, and Community Service.

It is necessary to respond to the behavior of academic culture that focuses more on e-learning activities, thereby reducing the nature of the human relations relations between lecturers and students. Face to face can be used to understand the psychological condition of students and provide direct example as a teacher / lecturer.

The Ministry of Research and Technology and Higher Education needs to increase grants for community service related to social and cultural issues because the door for universities to make changes in society is through Community Service.

It is necessary to increase cooperation with the education council at the regional level, considering that not all problems will immediately appear at the PT level but begin with the formation of the character of prospective students from primary, secondary and upper education.

It is necessary to increase the APBN allocation for PTS (which is 90%) which generally has limited resources so that the recruitment of human resources and students is also limited so the quality of learning is not optimal.

Education policy needs to include consideration of regional conditions such as facilities and infrastructure and public infrastructure which are still lacking.

It is necessary to strengthen the awareness of “unity in diversity”.

It is necessary to review the Accreditation System which is high cost and the administrative burden is reduced for lecturers (according to regional conditions).

Increasing the organization of cultural festivals by universities to become the glue of the nation.

Need to strengthen Quadran Helix (PT-Masyarakat-Pemda-Swasta) in order to achieve sustainable development and the generation of Indonesian gold.

In line with the opinion of UNDIP Rector, Prof. Dwia Tina Pulubuhu, Chair of the FRI 2018-2019, also emphasized that in the framework of innovating universities, the main theme of this year’s FRI Conference was the role of universities in the digital era. Therefore it is necessary to develop collaborative education using appropriate methods, such as distance learning, blended learning. Then the need to fulfill industry 4.0, it is necessary to open a vocational program that leads to technology science, sustainable, effective and efficient. “The point is the management of the bureaucracy, so that later the sciences can be combined into one study program or department or faculty,” said the Rector of the University of Hasanudin.

However, in its implementation there are still obstacles, especially the issue of changing new nomenclature, new titles, the name of study program is not simple because it is related to cross-ministerial policies. PTN OTK in certain structures are bound by funding statutes, so adjustments must be made and approved by the ministry. “Therefore FRI encourages the cross-ministerial policy to be faster and simpler,” said Dwia.

In this conference there was also the election of FRI leaders and representatives for the period 2020-2021. The Rector of IPB, Prof. Arif Satria was elected by acclamation as chair of the FRI for 2020-2021, accompanied by Dr. Nasrullah (Indonesian Technocrat University) as Deputy Chair of the FRI elected 2020-2021. Meanwhile, Prof. Dwia Aries was elected as Chair of the 2019-2020 FRI Advisory Council.

The FRI Conference was closed with the submission of the FRI as a relay symbol of the FRI leadership, from the Chairperson of the FRI for the period 2018-2019, UNHAS Rector Prof. Dr. Dwiya Aries Tina Pulubuhu to UNDIP’s Rector, Prof. Dr. Yos Johan Utama, Chair of FRI 201-2020. 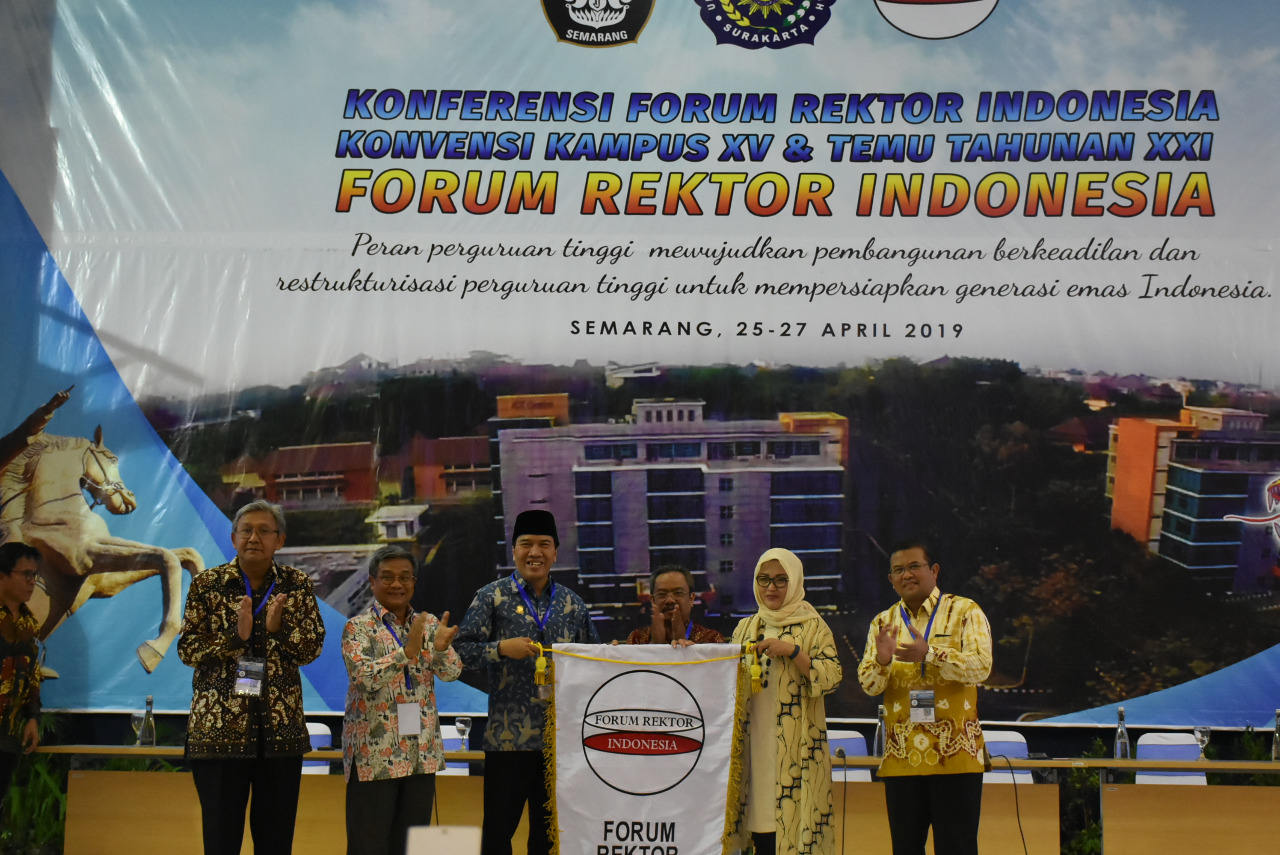