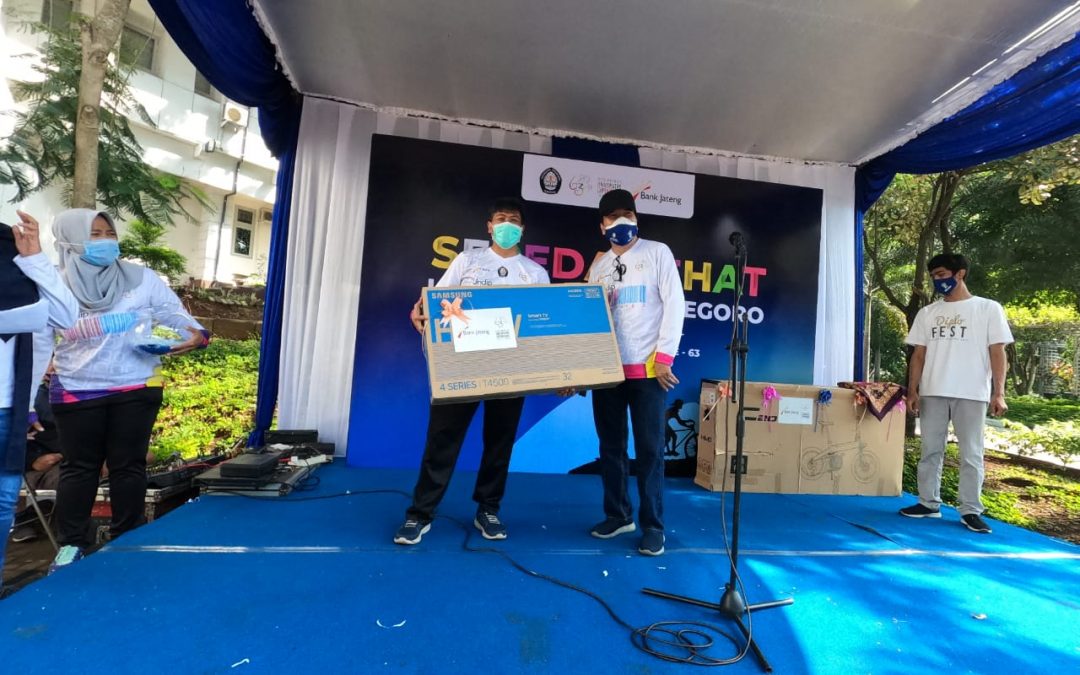 In the current pandemic, health comes first. Many efforts have been made to maintain health and immunity, including by exercising. Recently UNDIP holds Healthy Cycling Event in the series of UNDIP’s 63rd Anniversary which is held on Sunday morning (8/11). The route starts from Faculty of Fisheries and Marine Sciences Building and heads out of the campus gate towards the Sikatak Bridge. The route continues by passing the front road of Faculty of Medicine, Tomb of UNDIP, National Hospital of Diponegoro, Faculty of Economics and Business, up to the road leading to BNI Tembalang. Turning left and passing by Polines towards the UNDIP gate, the finish line is in the front yard of Widya Puraya Rectorate Building, UNDIP Tembalang.

Unlike the healthy cycling or healthy walks events in commemoration of the previous UNDIP Anniversary, Healthy Cycling Event on this year’s Anniversary is limiting the number of participants. This is done as implementation of health protocols and as effort to avoid crowds. However, the event is running quite lively, especially by enthusiasm of participants to get the door prize which is sponsored Bank Jateng.

The event is attended by Rector, Vice Rector, Chair of Academic Senate, Board of Trustees, Deans and Officials of Bank Central Java and their staffs. In his remarks, UNDIP Rector, Prof. Dr. Yos Johan Utama, SH., M.Hum. expresses his gratitude for the support from Bank Jateng to participate in celebrating the 63rd Anniversary of UNDIP. “The world is currently still being tested, the pandemic has had a major impact on all aspects of life. The limited social space makes this activity impossible to invite many people considering health protocols”, said Prof. Yos. Furthermore, Prof. Yos also courages us to remain enthusiastic about activities and work while still paying attention to health, by doing activities such as walking and cycling. Prof. Yos adds that healthy living habits support employee performance, which in turn has an impact on general welfare. His remarks is in accordance with the 3rd goal of Sustainable Development Goals, namely Good Health and Well-Being.

Meanwhile, Bank Jateng Independent President Commissioner, Edhi Chrystanto welcomes and shows gratitude to Undip for being given the opportunity to participate in celebrating the 63rd Anniversary of UNDIP. He said that the jargon of Undip Better is also a spirit for Bank Jateng to be even better in providing services and holding partnerships with UNDIP. This is in line with the objectives of the 17th SDGs (Partnership for The Goals), and this partnership aims to improve the quality of human resources and develop Central Java through contributions that benefit the society.

The event is closed with the distribution of door prizes which are sponsored from Bank Jateng. There are consolation prizes such as towels and emergency lights. There are also mini rice cooker, fan, Bima savings (of Bank Jateng) of one million for each of the lucky ones. The main prizes are cellphones, smart TVs, and e-bike as the grand prize.