Student of Masters in Literature, Faculty of Humanities UNDIP, is Proud to be Language Ambassadors 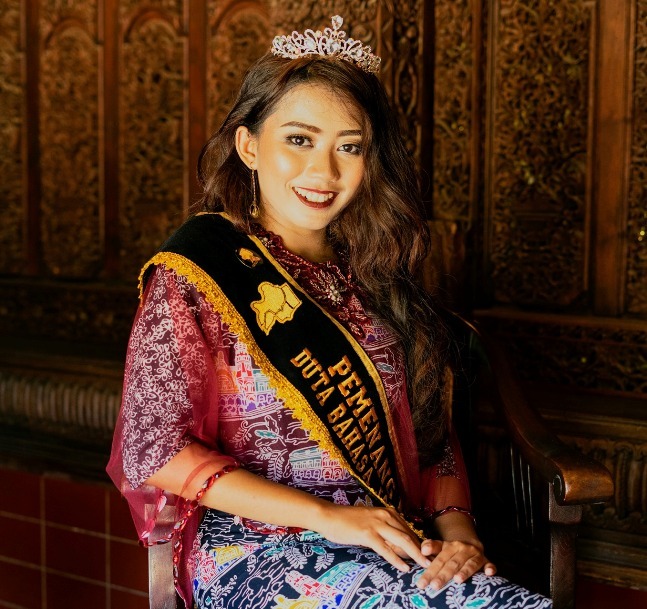 SEMARANG – Student of Master in Literature Study Program, Faculty of Humanities Diponegoro University (UNDIP) Semarang, Nur Sitha Afrilia, said she was proud to have the opportunity to become a Language Ambassador for Central Java. With this predicate, she felt that she could share her knowledge of language with a wider audience.

She emphasized that her participation in Language Ambassador Selection event, which is held annually by Language Agency of the Ministry of Education and Culture of the Republic of Indonesia, is motivated by the intention to contribute in dignifying Indonesian language. Therefore, when she was selected as Winner III of Central Javanese Language Ambassador 2019, she was grateful for that achievement.

Nur Sitha who comes from Pati also hopes that this event will be able to give birth to young people who dare to contribute in dignifying Indonesian language. Therefore, when there is a mandate to manage the language ambassadors’ organization, she accepted the assignment as Deputy Chairperson of Central Java Language Ambassador Association (Ikatan Duta Bahasa Jawa Tengah). “The task of becoming an ambassador for Indonesian is not completed in the election event, but it is continued through the activities of Association of Language Ambassadors,” said Nur Sitha Afrilia, on Wednesday (17/3/2021).

As someone who is involved in the world of languages, in between her busy schedule completing her thesis, Sitha is also active in writing novels. In October 2020, his first novel entitled “Ragana” is being published. “For me, growing and developing within the Faculty of Humanities, especially from Indonesian Literature to Masters in Literature has convinced me that morally, I have a greater responsibility to educate people in the fields of language and literature,” she added.

Thus she thought that events such as Language Ambassador Selection should be given more attention since it is quite different from the election for ambassadors in other fields. “The selection of Language Ambassadors at the provincial level is quite strict, both in terms of administration and the criteria for individuals who will be given the opportunity to participate in the selection at their respective regional levels,” she said.

In the selection process, each participant is required to have a Central Java identity card and is required to initiate a language program. Good public speaking skills are also required. This is proved with the results of Proficiency Test in Indonesian, being able to speak local languages (especially Javanese) well, and at least being able to speak foreign languages (English).

In addition, nationalism and cultural insights as well as skills in the arts are also aspects that support the assessment of the personality of each participant. “Complete and complicated, that is the impression attached to the criteria that must be possessed by a Central Javanese Language Ambassador,” she explained.

Although the terms and conditions set are quite heavy, for Sitha, this is not a barrier for her in fighting for her determination. “It is part of our responsibility as the heir to the baton of the nation’s leadership. Automatically I also have the responsibility to maintain the identity of Indonesian nation, in the midst of globalization which is slowly increasing the tendency to neglect the dignity of Indonesian language and regional languages. In fact, Indonesian language and the diversity of regional languages in this country are unique identities that differentiate our country from other nations.”

Admittedly, Sitha’s decision to participate in Central Java Language Ambassador Election 2019 is inseparable from the support of Indonesian Literature study program that provided optimal support. So it is not surprising that this student who is also Most Outstanding Student of Faculty of Humanities UNDIP in 2017 is able to achieve an honorable position in the event. Sitha is also the Ambassador of Central Java Museum 2018 and is currently active in Pati District GenRe Forum under the auspices of Social Service and National Family Planning Coordination Board of Pati Regency.

As completing her thesis, Shita’s achievements are not only domestically, but she has also been delegates to Asean Youth Summit 2017 in Philippines, won an award at Asia Pacific Future Leader Conference 2016 in Malaysia, and won 2nd place in Amity Youth Festival 2016 in New Delhi, India.