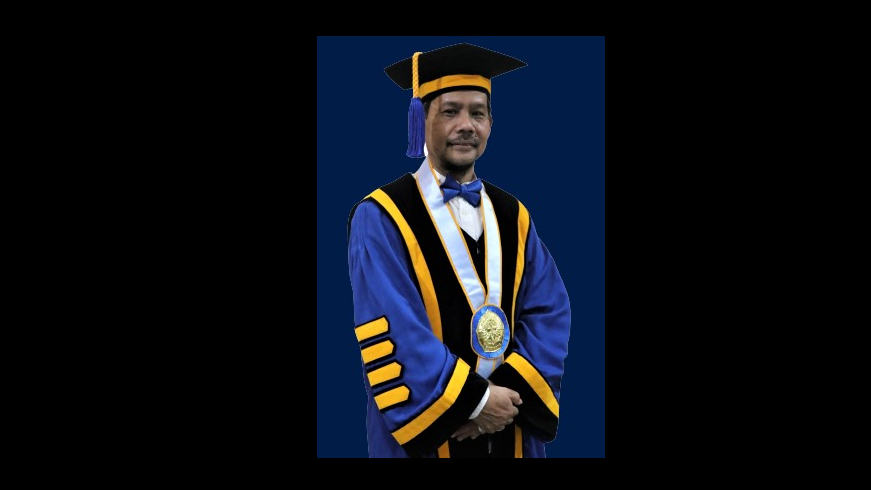 SEMARANG – Intensive aquaculture as an activity that has economic benefits and brings profit, can also cause environmental problems if the cultivation process does not consider ecological and sustainability aspects, so environmental disturbances will be happened. Cultivation with important profit target should notice sustainability aspects as well. Therefore, assistance is needed to optimize sustainable aquaculture production while maintaining its ecological aspects with technology, to provide information if environmental disturbances occur.

“There have been many studies on the impact of fish farming activities on qualities of water and sediment. However, the results vary, indicating that abiotic environmental variables alone are not sufficient to determine environmental quality more comprehensively. That’s why I tried to develop a biomonitoring application that can observe cultivation activities,” said Prof. Drs. Sapto Purnomo Putro, M.Sc., Ph.D in his inaugural scientific speech as Professor of Biology at Faculty of Science and Mathematics of Diponegoro University (UNDIP), in Prof. Soedarto SH Building Tembalang Semarang, on Thursday (10/6/2021)

In a scientific speech at Open Session of Undip Academic Senate entitled “Innovation in Biomonitoring Application Development: A Contribution of Applied Biology to the Sustainable Productive Aquaculture Industry”, Sapto, who received his doctoral degree from Flinders University Australia in 2006, stated that the level of disturbance of aquatic ecosystems can be measured by using macrobenthos structure, a basic aquatic organisms in the form of animals and plants, which live on the bottom surface of the waters.

The biomonitoring process that is able to monitor biotic and abiotic variables, consists of six steps. Starting from sediment sampling, fixation, rinsing, sorting, preservation, and identification for data analysis. After that, the results of the assessment and recommendations will be known.

At this Open Session, Sapto Purnomo, who served as Deputy Dean for Research and Innovation at Faculty of Science and Mathematics Undip in 2016–2019, said the level of environmental disturbance can be determined by comparing the abundance and biomass of macrobenthos community or known as Abundance-Biomass Comparison (ABC) method. In disturbed area conditions, the macrobenthos community is dominated by organisms that have an “r-selection” strategy in their lives, or are called opportunistic species. These macrobenhos have the characteristics of relatively small body size, short life span, dominant in the number of species but low or little biomass, have a high potential reproduction rate, and early maturation.

The graphical approach and multivariate analysis developed by the man born in Tebing Tinggi, December 26th 1966, is the Non Metric Multidimensional Scaling (NMDS) ordination, which is positioning each sampling station so that the closer the stations are, the closer macrobenthos community structure is between the two stations, and vice versa. The use of NMDS ordinance can describe differences in structure of macrobenthos community between space and time. This can determine the degree of difference in macrobenthic structure between the culture site and the reference area.

“My team and I also developed the EWS-3SWJ Early Warning System software application to measure the level of water quality in aquaculture environments. The level of water quality is determined through this application by taking into account the biotic and abiotic components and their index. Each component has a weight level that affects the results of determining the level of environmental disturbance. The weight of each component is the result of the extraction of the expertise of our research team in Center of Marine Ecology and Biomonitoring for Sustainable Aquaculture (Ce-MEBSA),” added the Doctor of Marine Ecology whose dissertation entitled “Studies on the Structure and Distribution of Macrobenthic Assemblages Inhabiting Coarse Sediments Adjacent to Southern Bluefin Tuna Cages at Southern Spencer Gulf, South Australia”.

The software formulation developed uses a “smart algorithm” and can be used as a reference for taking strategic steps, whether a station is still in a suitable condition for cultivation activities or needs to be handled specifically so that the optimization of cultivation productivity and carrying capacity is maintained.

“The application of biomonitoring has been applied to the cultivation process of Integrated Multi Trophic Aquaculture (IMTA) system, a polyculture cultivation approach that is carried out by integrating the cultivation of species that require additional feed for growth. It is cultivated together with species which can extracting inorganic matter such as seaweed, and also with species that able to extract organic matter such as suspension and deposit feeders. Thus this way will minimize the impact of organic enrichment in the cultivation area,” added the lecturer who teaches 16 courses including Biosafety, Biodiversity, Ecological Systems and Biomonitoring.

The IMTA application is believed to be able to maintain the balance of the ecosystem and carrying capacity of environment in the cultivation area. “Sustainable aquaculture is a spirit that needs to be nurtured in processing of aquatic resources. For this reason, the roles of the government, both central and regional, are very important, including through the allocation of the central budget and regional budget for the development of fishery sector. If the development of fishery sector has increased, private investors will certainly be interested in participating, of course by emphasizing the importance of productive, effective and efficient, and sustainable aquaculture practices. As the largest maritime and archipelagic country in the world with a coastline of approximately 95,181 kilometers, our potential is extraordinary,” concluded the father of five children. (PR team)