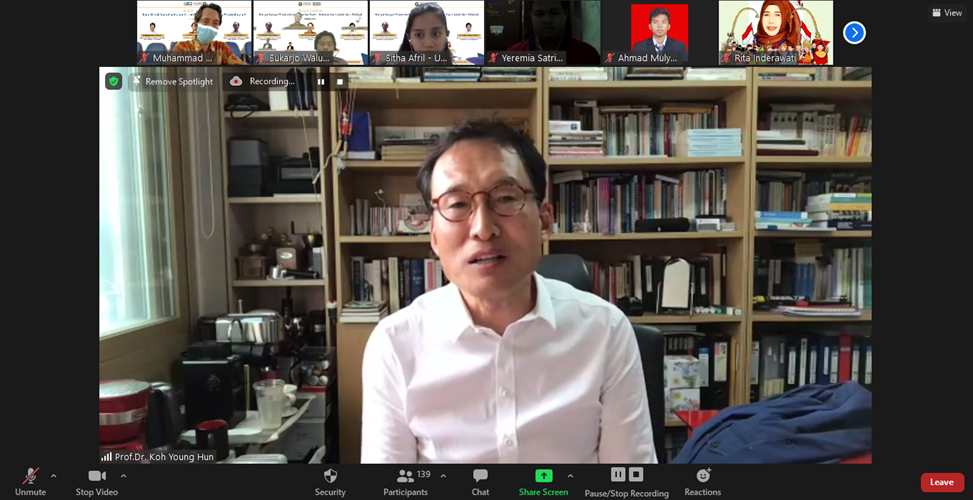 SEMARANG – Masters in Literature of Faculty of Humanities Diponegoro University (UNDIP) continues to develop a series of public lecture activities which is conducted by online. This is done because the public lecture that presented professors with international reputation encouraged the birth of the ideas needed as a prospective Masters students.

The public lecture held in the form of a webinar raised a very relevant theme, namely “Pramoedya Ananta Toer’s Works: Between Local and Global Issues”. This activity is not only about public lectures and webinars, but it is also useful for developing collaborative networks with universities abroad. Most recently, we collaborated with Hankuk University of Korea,” he said.

Regarding the theme of Pramoedya, it is chosen because the writer is considered to be one of the writers who appears only once in a century. His figure is seen as a writer who is phenomenal, productive and has distinctive character.

It can also be seen on how Prof. Koh Young Hun, Dean of Foreign Studies at Hankuk University, who is the resource person on this public lecture webinar series, is able to explore and analyze Pram’s works in detail. Besides Prof. Young Hun, the other two speakers are from Masters of Literature of Faculty of Humanitie Undip, Dr. Redyanto Noor M.Hum and Dr. Sukarjo Waluyo M.Hum.

Prof. Koh Young Hun himself has done a lot of studies on the works of Pramodya Ananta Toer. Young Hun is a South Korean Indonesianist who specializes in literature. This activity is guided by Master of Literature students who have achievements as Ambassadors of Central Java Language and Ambassadors of Museum, namely Nur Sitha Afrilia, S.S.

“Participants of this public lecture webinar, other than students of Masters of Literature UNDIP, are also attended by alumni, literature enthusiasts, literary researchers, language and literature teachers both from Indonesia and abroad. The number of participants reached to 179 people,” he explained. (PR team)