Signing of MoU on Collaboration Commitment between UNDIP, UI, and ITB with UCLG ASPAC 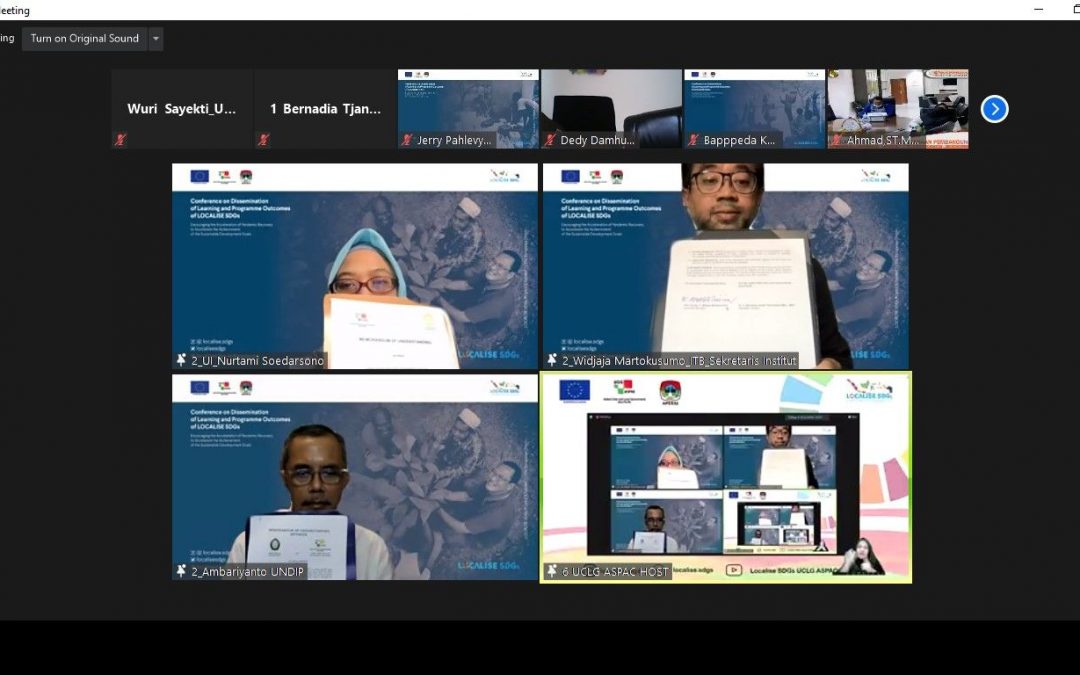 On Thursday, June 24th 2021, the signing of MoU on Collaboration Commitment in Efforts to Accelerate the Achievement of Sustainable Development Goals between UNDIP and UCLG (United Cities and Local Government) ASPAC is held. This MoU is similar with MoU between University of Indonesia (UI) and Bandung Institute of Technology (ITB) with UCLG ASPAC. UNDIP is represented by Vice Rector for Research, Innovation and Cooperation, Prof. Ir. Ambariyanto, M.Sc, Ph.D., and UCLG is represented by Secretary General of UCLG ASPAC, Dr. Ir. Bernardia Irawati Tjandradewi, M.Sc., MPP.

The signing of this MoU is a commitment of the two parties to continue the cooperation that has been established previously to continue accelerating the achievement of the SDGs targets by 2030. Dr. Bernardia stated that considering that there are only 9 years left towards the realization of the SDGs, with the unpredictable challenges of Covid-19 pandemic, UCLG ASPAC together with UNDIP (through the SDGs Center) and other universities that pay great attention to the SDGs, are determined to continue and accelerate work in a sustainable manner collaboratively in the fields of research, advocacy, education, and localization of the SDGs.

At the moment of signing this MoU, Prof. Ambariyanto said that UNDIP’s collaboration with UCLG ASPAC is very important because it will be a great support to local governments, both city and district, regional government associations, and also to Undip itself in the implementation and achievement of SDGs target in 2030. This collaboration has previously also been carried out between Undip and UCLG ASPAC through several activities such as preparation of Pocket Book for Local Governments and People’s Representative Councils, compilation of good practices from local governments in LOCALISE SDGs, joint-webinars, trainings at the local level regions, and preparation of training modules. Prof. Ambariyanto also expressed the hope that Undip as an institution would make this collaboration better and closer, so that it could expand the wings of collaboration with UCLG partners in Asia Pacific and harmonize collaboration with Undip’s core interest in Coastal Region Eco-Development. This collaboration is also expected to achieve several SDGs targets, specifically Goals 1, 2, 3, 7, 9, 11 and 14, 15, 16, 17.

The signing of this MoU is the culmination of a series of “LOCALISE SDGs” Learning and Outcomes Dissemination Conference events organized by UCLG ASPAC and APEKSI (Asosiasi Pemerintah Kota Seluruh Indonesia) / Association of Indonesian City Governments. This conference event consists of several agendas which take place from 08.30 AM to 02.30 PM through Zoom meeting. “LOCALISE SDGs” is an SDGs localization program for regions that is carried out through socialization, training, mentoring, advocacy, and good practices for local governments throughout Indonesia with program funding from the European Union through UCLG ASPAC as the program implementer.

This “LOCALISE SDGs” program involves government associations and regional legislators in Indonesia such as APEKSI, APPSI, APKASI, ADKASI, ADEKSI. This series of conference events consists of several agendas such as Submission of Results of the LOCALISE SDGs Program (in the form of Pocket Books, Training Modules, Monitoring and Evaluation Instruments, Compilation of Good Practices / Best Practices for Local Governments, Research Results Reports, Infographic Videos, Technical Assistance Reports), Webinars with a Keynote Speech from Mrs. Erna Witoelar, and a talkshow that presented speakers from Central Government, Regional Government, and the Mayor of Naga City, Philippines and Subang Jaya, Malaysia. This event is also broadcasted on Youtube channel at the following link: https://www.youtube.com/watch?v=_VbpbV_sloE