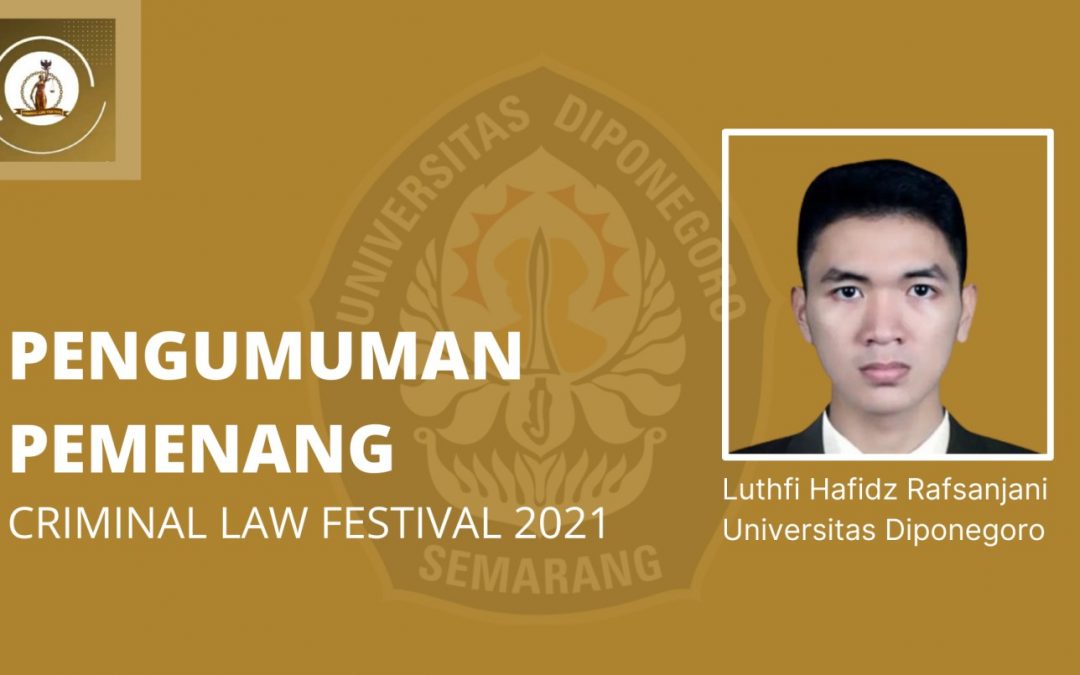 SEMARANG – Luthfi Hafidz Fafsanjani still felt proud after winning the first place at National Criminal Law Fest (CLF) competition held by the Faculty of Law, Semarang State University (Unnes) in 2021. A student of Faculty of Law of Diponegoro University (Undip) was selected as the best for his scientific work entitled “The Concept of Reversed Evidence as a Strategy for the Prevention and Eradication of Money Laundering in the Capital Market Sector for Terrorism Financing Means” in this competition.

In the competition, Luthfi had to compete with participants from 16 other universities in Indonesia. “I am very grateful because I can contribute to the achievements of my beloved alma mater. Hopefully this achievement can be part of the effort to improve the reputation and good name of the Faculty of Law of Diponegoro University,” said the student born in Lampung, August 6th 2001 to the Undip Public Relations team, on Wednesday (27/10/2021).

CLF 2021 is an annual competition event in the form of a National Scientific Writing Contest (LKTI) in the field of criminal law organized by the Penal Study Club of Faculty of Law Unnes. The event will be held from September 3 2021 to October 24 2021.

When asked about the title of his work, namely “The Concept of Reversed Evidence as a Strategy for the Prevention and Eradication of Money Laundering in the Capital Market Sector for Terrorism Financing Means”, the student of Class of 2019 explained that this work was motivated by the current state of development of information technology, especially in the financial sector which constantly adapting to global phenomena. This then allows for a trend in fields of trade, assets, and money to flow freely without barriers.

Luthfi saw that there are some factors that open up opportunities for the risk of exploiting the development of the financial sector. The risk can be supporter or the main means of crime by transforming the mode of crime to be more sophisticated and increasingly difficult in terms of proving, for example, crimes in the form of money laundering and terrorism financing.

On the other hand, law enforcement officers often face difficulties in terms of proving related to money laundering and terrorism financing, especially in proving the subjective element or mens rea of these crimes. Reverse proving is an important endeavor here.

“The concept of reverse proving and combining it with the regulations regarding the blocking of the accessibility of assets, every person or corporation that is known or reasonably suspected to be or has committed a criminal act must automatically prove that the assets or funds owned by them do not originate from the proceeds of a criminal act. This is the basis of my title work which I conveyed through this competition,” he added.

Regarding his own preparation, this alumni of SMA Negeri 3 Metro Lampung said that the preparation itself was not too long, considering that the estimated time given by the committee was considered quite short. Moreover, in terms of preparing a scientific paper, it is generally carried out by a team consisting of 2 to 3 people or more, but in the preparation of this scientific paper and presentation are done individually.

“The preparation happened at the same time with the implementation of the Mid-Term Examination, so it became a challenge for me to do several things at one time. With hard work, thank God, it has produced very proud results,” said Luthfi.

The student who has also won ambassadors in the “Narasi Toleransi” activity organized by the Indika Foundation and the United Nations Development Programme 2019 admitted that he was grateful and expressed his gratitude to the supervisors and assistants from Undip. This achievement cannot be separated from the role of many parties, including faculties and universities that have formed a good academic environment.

He hoped that fellow students at Faculty of Law Undip who want to participate in various competitions can look for information through social media and others. In Faculty of Law Undip, there are several research-based Student-Faculty Activity Units that will accommodate and facilitate students who want to participate in competitions through open recruitment. “Join a competition, because by competing in anything, you can improve and hone your abilities, add scientific insight, and develop self-confidence.”

Meanwhile, when confirmed by the PR team, the Dean of Faculty of Law Undip, Prof. Dr. Retno Saraswati, S.H., M.Hum, expressed her joy in the achievements of Undip law students. “I am very proud, hopefully with this achievement it can boost the spirit of other Undip Law students to get achievements at national and international levels,” said Prof. Retno. (PR team)