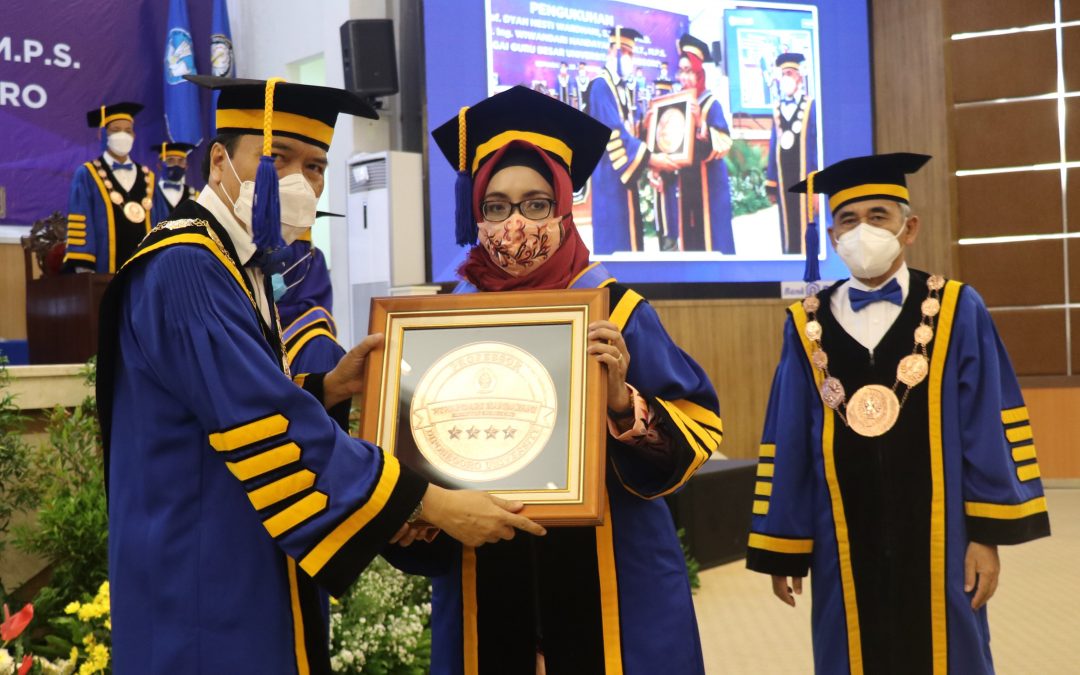 SEMARANG – Lecturer at the Department of Urban and Regional Planning, Faculty of Engineering, Diponegoro University (Undip), Prof. Dr. Ing. Wiwandari Handayani, S.T., M.T., M.P.S. officially held the title of professor after the inauguration at the Prof. Soedarto, S.H. Building in Undip Tembalang Campus, on Thursday (10/28/2021). The figure who is widely known by domestic and foreign stakeholders in the field of city resilience delivered a scientific speech entitled “Operationalization of the Resilience Concept in Urban and Regional Development Planning”.

Indeed, in the last ten years Prof. Wiwandari is significantly involved in the field of urban resilience, especially for the city where she lives, Semarang. This year, the professor who has two different degrees for her master degree, became one of the main compilers of the Land Subsidence Road Map for Central Java.

At the inauguration of professors at the Open Session of Undip Academic Senate, the mother of two daughters explained about areas and cities that have resilience, namely those that can quickly respond to survive, to adapt, and to grow better because of its resilience in overcoming any disturbances that arise.

This presentation is based on research conducted in the last ten years and policy advocacy practices, especially based on practical experience as Deputy Chief Resilience Officer of Semarang City in the 100 Resilient Cities/Global Resilient Cities Network (GRCN) network. The concept of regional/city resilience, according to this doctoral degree from the University of Stuttgart, has operational complexity which consists of three things.

First, at the policy level, the resilience concept is still multi-interpreted. National development policy documents place the term resilience in various development sectors which interpretations still need to be consolidated in order to synergize with each other. Second, at the practical level, rapid urbanization has created various problems in the planning and development of regions and cities. This occurred in line with various shocks and pressures in various areas with high population concentrations and intensive economic activities. A more controlled urbanization should be used as a development lever that pays more attention to the balance between efforts to improve community welfare and environmental management. Third, to synchronize policies and their implementation, governance is the backbone that still faces obstacles in its implementation.

“I hope that the formulation of these three important things can be used for various studies that have been carried out. The three things mentioned have the objectives to enrich the concept of resilience at the scientific level, as well as in the practice of regional and city development planning policies in general and in Indonesia in particular,” she explained.

Coastal cities particularly face many disturbances that can be categorized into two groups, namely shocks and stresses. Shock is a disturbance that occurs suddenly and causes tremendous damage. Flash floods due to extreme weather, tsunami, and earthquakes that suddenly occur are shocks experienced by various regions in Indonesia which cause massive losses and damage.

In contrast to shocks, pressure or stress are disorders that tend to occur more often so that people feel they are used to it and then adapt well to deal with these disorders. One type of pressure in urban areas, for example, is traffic congestion and the emergence of the informal sector which creates the impression of slums and mess.

The term resilience is used to describe the conditions experienced by an area and a city in response to various disturbances on the micro (individual-community), meso (region), and macro (urban supra-urban) scales.

In the context of the city of Semarang, Wiwik said the main problem was water. When there is an excess amount of water it causes flooding, while the amount is less it causes drought. To overcome this, she suggested handling in three areas in parallel, namely the application of the spoons concept in the upstream so that excess water is stored and released when needed, in the middle by managing drainage and land, and downstream at the coastal areas in Semarang. It is necessary to plant mangroves and carry out embankment construction. “To implement it, it is necessary to cooperate with all stakeholders, including developers who control the land, and other governments of other regencies,” she said.