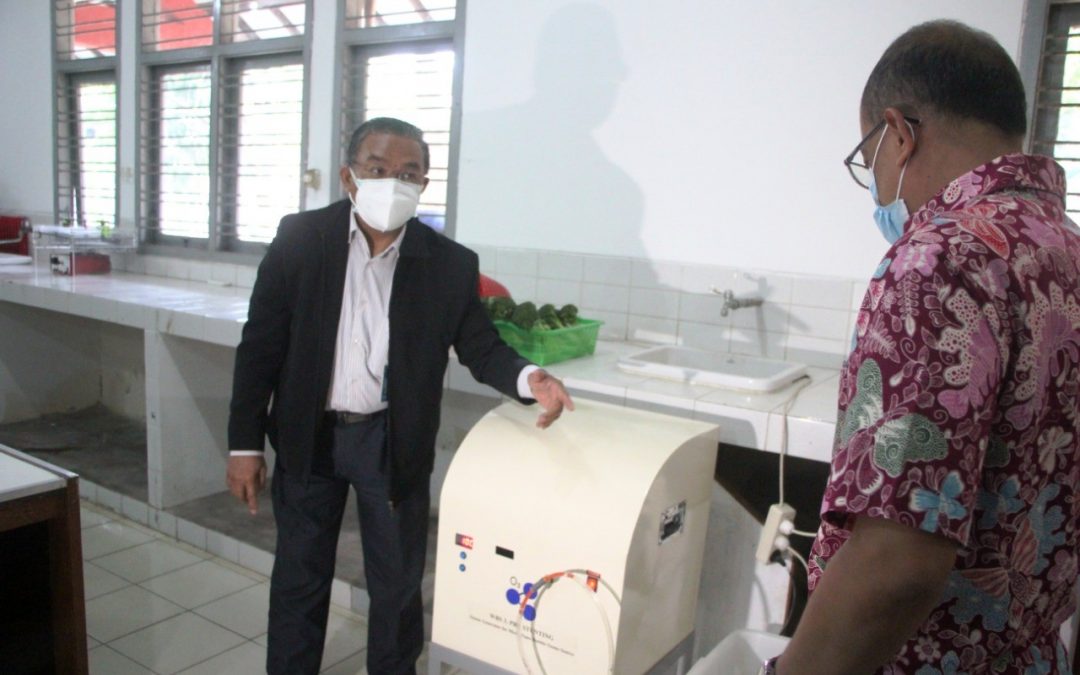 SEMARANG- Professor of the Faculty of Science and Mathematics (FSM) of Diponegoro University (UNDIP), Prof. Dr. Muhammad Nur DEA, through research developed at the Undip Center for Plasma Research, succeeded in developing a pesticide reducing device in vegetables and fruit through washing with micro-ozone bubbles. This discovery is expected to help preventing stunting in children which one of the causes is the pesticide content in the vegetables and fruit consumed.

The device invented by the physics professor of FSM Undip, named the Nano & Micro Ozone Bubble Generator (GenGONaM), is one of the innovations selected to be included in the National Research Priority (PRN) of the National Research and Innovation Agency (BRIN) for Stunting Program period of 2021-2024. “I hope that through the research and innovation that we have developed, we can eliminate pesticides in food and can help reducing stunting cases in children,” said Prof. Nur at the Acyntia Persada Building, Faculty of Science and Mathematics Undip, on Saturday (12/18/2021).

He revealed that one of the factors that prompted his findings was the concern about the number of stunting cases due to the food products consumed by the community which contain a lot of pesticides so that they are very dangerous. Consumption of vegetables and fruit that contain pesticides causes the body to not develop properly, and even more terrifyingly interferes with the development of intelligence.

Regarding the workings of the device he designed, Prof. Nur said that this device used an ozone generator with the production of micro and nano bubbles. Ozone in the form of micro and nano bubbles is more soluble in water. Ozone dissolved water is used to wash horticultural products, especially vegetables and fruits that contain pesticides. The washing is carried out in a rotating container (known as a centrifugal plane) so that the water used for washing directly comes out and does not touch the product again. To generate nano-micro ozone bubbles, the ozone output through a silicon tube is connected into the air duct end via the venture pipe. The output of the venture pipe forms bubbles of micro and nano size. Then the water from the dissolving vessel is pumped repeatedly so that the dissolved concentration will more quickly reach the level required for the utilization of water with dissolved ozone for washing.

“Ozone contains three oxygen atoms. In water, one atom will be released into oxygen radicals. These oxygen radicals destroy pesticide compounds and are released from the surface of vegetables and fruits. With a combination of ozone water and a centrifugal plane, various tests were carried out, and the result is this device can reduce pesticides by up to 95 percent in 10 minutes. This technology is really useful in processing food raw materials, especially for breastfeeding mothers and children so that the food is no longer contaminated with pesticides,” said Prof. Nur.

It was revealed, of the 38 proposals selected for the PRN Stunting Program, 7 proposals came from Undip teams. “We hope that in the future Undip can make a real contribution from the results of this program, so that Undip’s medium-term goal of helping the government’s target of reducing stunting cases in Indonesia from 30% to 14.5% can be achieved,” he hoped.

According to him, stunting is still a problem for the Indonesian government. The results found stunting cases in Indonesia were still above 30%, while the world health agency, WHO, set the maximum stunting cases in each country to be below 20%. This means that there is a big responsibilities of us in handling stunting that must be done together so that future generations will be in a better condition.

“The main target of this program is that research and innovation done by the researchers can be implemented for real such as technology, food products, road maps, content for literacy education or the concepts needed. The aspects include nutritional intake, mindset or behavior and the availability of clean drinking water,” Ignasius Sutapa added.