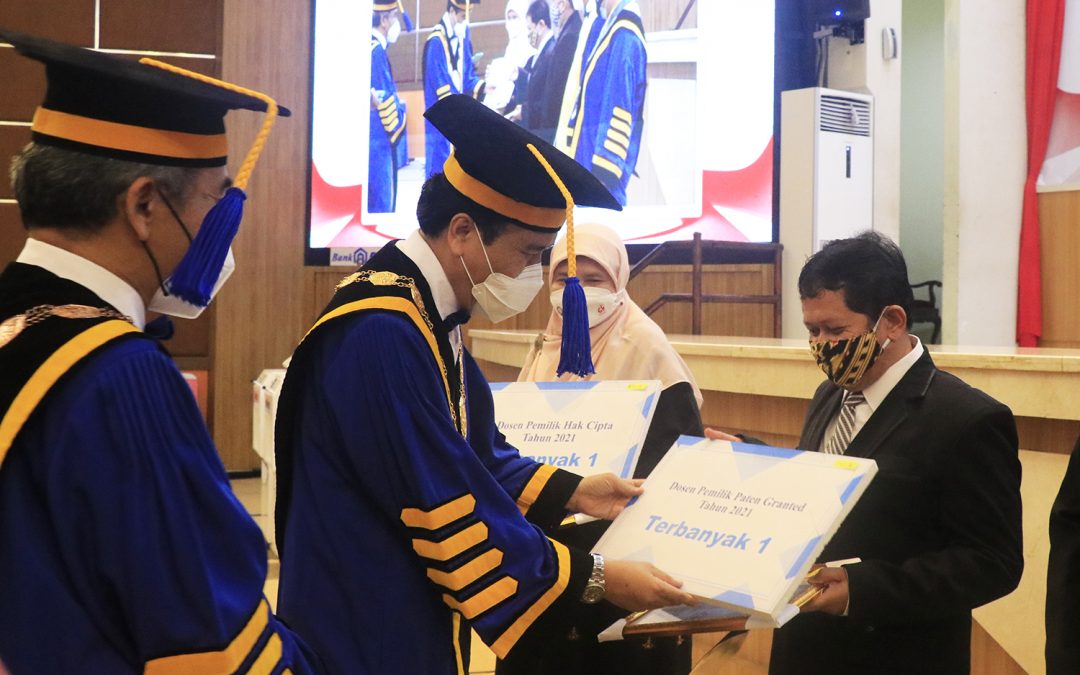 SEMARANG – The lecturer of Diponegoro University (UNDIP) Vocational School, Mohamad Endy Yulianto, S.T., M.T. continued to work and conduct research, it was recorded that he has produced 22 patents until the end of 2021. The latest research being carried out with his team is developing nano shogaol ginger as an anti-cancer ingredient.

The intellectual property rights owned by the winner of the 2021 Most Granted Patent Owner Lecturer Award at Undip consist of 3 intellectual property rights with ordinary patent status, 18 simple patents and 1 copyright. The field of study and innovation produced by the graduate of Chemical Engineering Undip in 1998 and Masters in Chemical Engineering ITB in 2003 is the field of chemical processes according to his field of studies.

The debut of the man born in Kendal on July 31, 1971 in his innovation work began in 2015 when his creation, Super Competitive Green Tea through an Enzymatic Inactivation Process using a Mechanically Dispersed-Rotary Steamer, received a simple patent with registration number No. ES09201500066. He continued to achieve patents in the following year and in 2020 the figure who is familiarly called Endy managed to get 9 patents. In 2021, he won 7 more patents.

Currently, with his team, he is developing research that focuses on treating cancer. The study with the theme “Development of Nano Shogaol Ginger Products as Anti-Cancer through UV-Photoextraction Technique with Subcritical Water”, was driven by his concern over the high cost of chemotherapy that must be borne by cancer patients in Indonesia. Besides being expensive, 90% of the raw materials used in the treatment of cancer patients still have to be imported.

“From my own brother’s experience, chemotherapy in a month can cost between IDR 30 million to IDR 60 million, even though the cost already has a discount. So imagine buying the medicine if the patient’s family is not financially sufficient, then it will be a burden for sure. From that experience, I tried to take advantage of natural ingredients in Indonesia which are very rich in benefits, one of which is ginger. From there, my team and I developed nano shogaol ginger through bioactive compounds as herbal medicine for chemotherapy for cancer patients,” said Endy to the Public Relations Team, on Tuesday (28/12/2021).

According to him, the production of nano shogaol ginger is one of the efforts to increase the nation’s independence in fulfilling highly competitive drugs and medicinal raw materials. The production of extracts of active ginger compounds can increase product prices up to 80.8 times higher than when sold in the form of ginger rhizomes.

“Therefore, it is necessary to develop a nano shogaol product as an anti-cancer with the development of a high efficient UV-photoextraction system using a subcritical water solvent. Shogaol in ginger is very extraordinary and is able to burst cancer through the bioactives in ginger. So this can help therapy for healing for cancer sufferers,” he explained.

Answering the question why nano shogaol ginger products must be made in nano-size, because the team is concerned about the time of delivery of the medicine into the body. After chemotherapy, the body is very vulnerable and acute and sometimes the body temperature is high and unstable. Thus in delivery of the medicine inside the body,  the compound can break first before the drug reaches the target point. “Therefore, my team and I tried to change the nano shogaol compound to be coated and protected so that this medicine could reach its intended target when being consumed,” Endy added.

There are several breakthroughs to transform nano shogaol, one of which is the development of a high efficient UV-photoextraction system using subcritical water as a solvent. This method also ensures the halal of the product because the MUI often asks whether the medicine uses alcohol or ethanol as a solvent. The use of UV-photoextraction system with subcritical water as a solvent is chosen because the solvent is not toxic, cheap, easy to obtain, available in abundant amount, has high purity, can be recycled and easy to handle, has a polarity close to the polarity of alcohol, has a low viscosity and voltage. The solvent can increase the diffusivity up to 10 times compared to ordinary water, even increasing the mass transfer rate, absorption in the particle matrix, and selectivity.

Research on ginger as an anti-cancer was funded by the Directorate of Research and Community Service, Directorate General of Research and Development of the Ministry of Research, Technology, and Higher Education for a research period of 3 years, from 2020 to 2022. Until the second year of the program, the program ran smoothly, even achieved good progress because it has been able to produce nano shogaol ginger as an anti-cancer that led to well-proven technology based on zero waste.

“In the third year, we will cooperate with pharmaceuticals and the government to make the herbal medicine of nano shogaol ginger into a capsule-shaped medicine so that people can buy it easily at affordable prices. Hopefully it can help the community, especially people who are struggling to recover from cancer,” hoped Endy, who also acted as the Head of the research team. Currently, his research is being assisted by Undip Biology Lecturer, Dr. Dra Susiana Purwantisari, M.Si (research member) as well as Undip postgraduate students. (PR team)