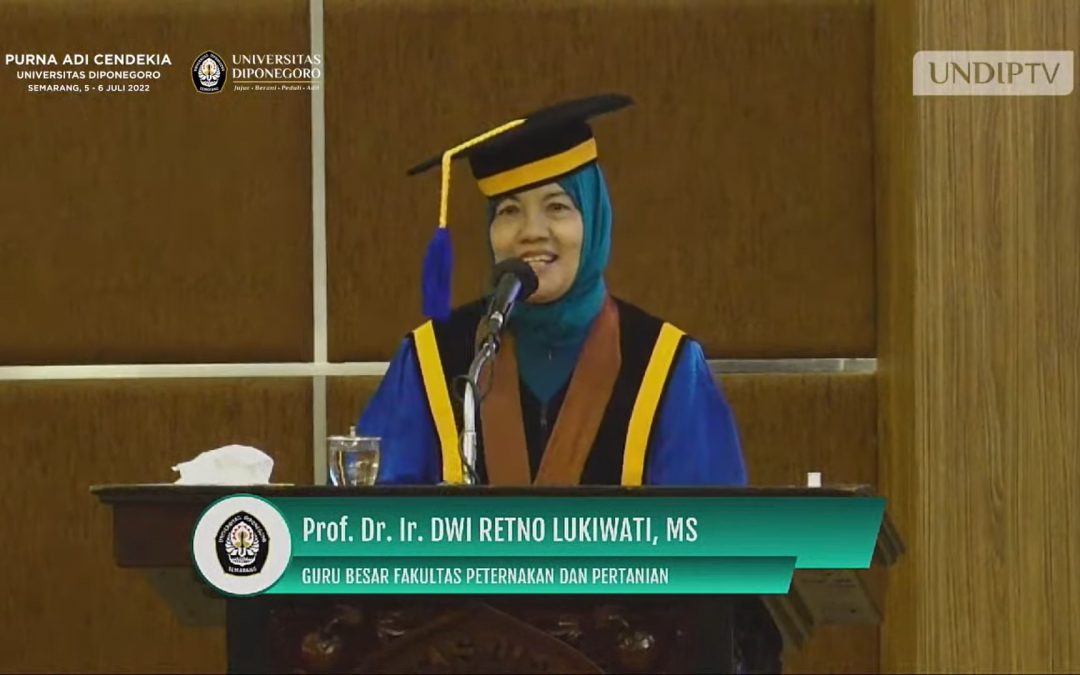 Starting in 1978, Prof. Dr. Ir. Dwi Retno Lukiwati, M.S. began serving on the campus of Diponegoro University (Undip). The Professor of Animal Food Crops at the Faculty of Animal and Agricultural Sciences (FPP) Undip has entered her retirement period this year.

In order to give appreciation and respect for the contribution and dedication that has been given, Undip held an Open Session of Purna Adi Cendekia on Wednesday (06/07) at the Prof. Soedarto, S.H. Building, Undip Tembalang Campus. At the event, Prof. Dr. Ir. Dwi Retno Lukiwati, M.S. had the opportunity to convey her early career journey at Undip until her retirement as one of the Undip Professors.

The woman who was born in Surakarta, June 17, 1952, revealed that she has been under the big name of Undip for almost 44 years. Pursuing a career with joy since she was a student until she reached the highest academic position, namely Professor.

“When I applied to serve at Undip in 1978, I was still a final year student. Not to forget the opportunity given by the Lieutenant Colonel drh. Soetopo Andar (late) who opened the door for me to serve at Undip.” said Prof. Dwi Retno.

The professor, who has a hobby of dancing and playing in bands, said that in 1974 she had become an Assistant for Animal Food Crops Practicum. Then she continued her Masters in Agronomy and Doctoral Degrees in Animal Science at the Bogor Agricultural University (IPB) using the TMPD (Doctoral Program Management Team) and SEARCA (Southeast Asian Regional Center for Graduate Study and Research in Agriculture) scholarships, respectively. In addition, some research while undergoing doctoral studies was carried out at UPLB (The University of the Philippines Los Baños).

Entering the doctoral study period, Prof. Dwi Retno started to participate in research implementation with the Competitive Grant Scheme fund in 1992-1996. “Some of the data is for my dissertation and one of the outputs of the Competitive Grant Scheme is publication at an international conference. So since then I often deliver presentations at international conferences abroad.” she explained.

After completing her doctoral studies, Prof. Dwi Retno continued her research focusing on Fertilizer Plus Technology (Manure enriched by natural nitrogen and phosphate). Furthermore, she explained that manure contains macro and micro nutrients, but the levels are low. This obstacle can be overcome by adding sources of organic nitrogen (legume), organic phosphate (guano) and natural phosphate (rock phosphate), and has been tested using sweet corn plants.

In addition, using the Competitive Grant, National Strategy, Professorship Program, and PTUPT funds, as well as funds from Undip, Prof. Dwi Retno has presented the results of her research in international conferences in more than 16 countries in the world.

“There are certainly many experiences, pleasures, and conveniences, as well as the spirit of enthusiasm that I got to reach my goals under the guidance of Diponegoro University. I thank you and apologize if there are mistakes while serving and building a career at Diponegoro University.” concluded Prof. Dwi Retno.