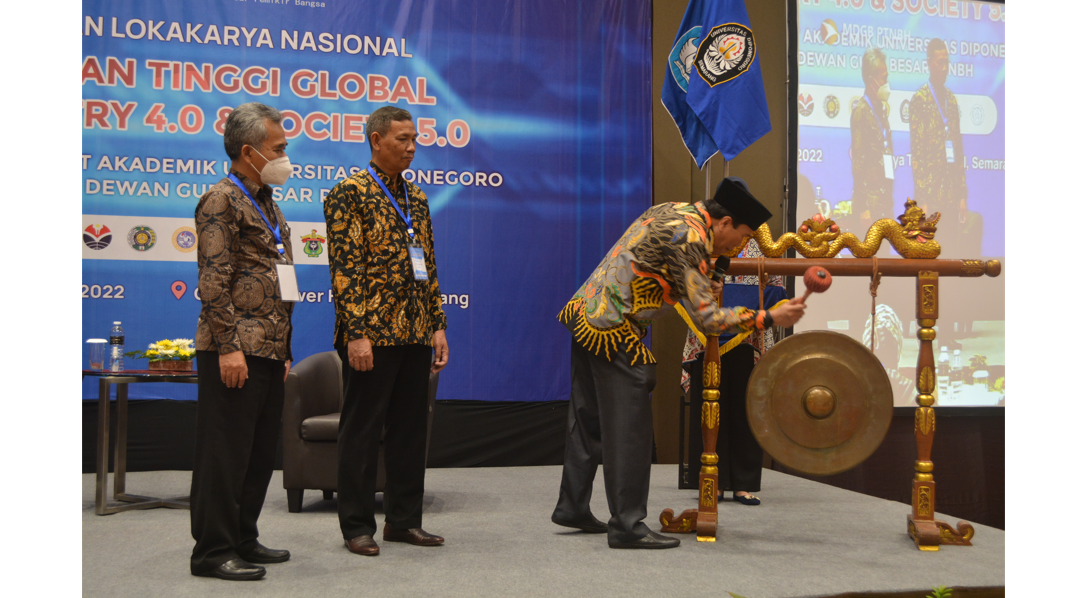 The Board of Professors of the Academic Senate (DP-SA) of Diponegoro University and the Council of Professors of Legal Entity State Universities (MDGB PTNBH) held a National Seminar and Workshop on “Global Higher Education Industrial Era 4.0 and Society 5.0” at Gumaya Tower Hotel, on July 22-23, 2022.

The event was opened directly by the Undip Rector, Prof. Dr. Yos Johan Utama, S.H., M. Hum. The Rector conveyed many issues that developed for discussion and hoped that the results of this seminar would provide great benefits and answers to existing problems.

“This 2022 MDGB PTNBH National Seminar and Workshop is one of a series of realizations of the MDGB PTNBH vision and mission. MDGB PTNBH has a vision to become a national think tank that plays a real role in realizing the welfare and prosperity of the Indonesian nation. The vision is described into the missions of MDGB PTNBH, namely developing national character and identity, developing scientific and strategic thinking, developing higher education human resources, developing norms, ethics, academic culture and moral integrity, optimizing the role of PTNBH in carrying out the Tri Dharma of Higher Education for prosperity,” he explained.

Furthermore, Prof. Purwanto said that the MDGB activity had a purpose, namely as an effort to achieve the vision, mission and goals of MDGB PTNBH, a discussion forum to convey the contributions of professors’ thoughts on educational issues that developed in Indonesia, and a media to strengthen knowledge sharing from PTNBH throughout Indonesia. This event is an event for establishing friendship and reinforcement for MDGB PTNBH management in carrying out the task of building a superior and dignified Indonesian nation so that the duty of Professors as national thinkers can be carried out as well as possible.

On the occasion, the Chair of the Undip Academic Senate, Prof. Ir. Edy Rianto, M.Sc., Ph.D., IPU. said that professorship is a position that places a person in a position as one of the keys in the development of science, technology and civilization in Indonesia, guardian of the soul and scientific spirit and guardian of morals in campus life.

Legal Entity State Universities (PTNBH) have built a commitment to coordinate and cooperate in developing higher education for the welfare of the Indonesian nation. The contribution of the thinking of the great teachers is very much needed for the advancement of education. The active role of professors is expected not only to be limited to the contribution of ideas, but also to be able to monitor and oversee the implementation of the various contributions of thought carried out to the regulation and policy implementation stage.

MDGB PTNBH National Seminar and Workshop is one of the facilities that can accommodate the various thoughts of professors. The output of this activity will not only provide benefits for the development of education in their respective universities, but also policy inputs at the national level. (Lin – Public Relations)