Visiting Professor General Lecture by Master of Literature UNDIP: Literature and Culture of the Archipelago as the Capital of Indonesia and Asia in the Contemporary Era 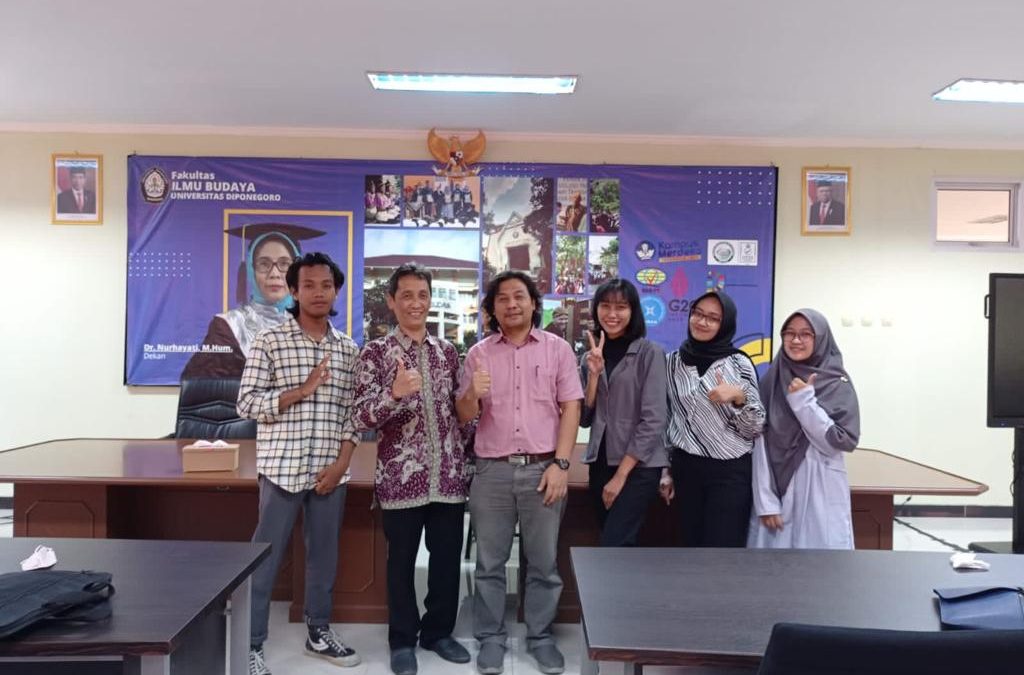 Firm in preserving culture in the era of the industrial revolution 4.0, the Master of Literature at Diponegoro University (UNDIP) held a Visiting Professor General Lecture with the theme “Literature and Culture of the Archipelago as the Capital of Indonesia and Asia in the Contemporary Era” on Thursday, August 4, 2022 at 13:00 – 16:00 WIB. This open activity invited three speakers as resource persons, namely Prof. Dr. Tatiana Denisova from the University of Technology, Malaysia; Dr. Suryadi, M.A from Leiden University, The Netherlands; and Dr. Sukarjo Waluyo, M. Hum from Diponegoro University. The event was hosted by Marta Widyawati, M.Hum, Undip Lecturer of Indonesian Literature Undergraduate Study Program as a moderator.

The first speaker, Prof. Dr. Tatiana Denisova, who is a professor at the Center for Higher Studies of Islamic Science and Civilization, University of Technology, Malaysia, presented a material entitled “Reflections on the Historiography of Malay Nature”. Prof. Tatiana explained about the tradition of writing manuscripts in Malay which has existed for a thousand years and has various genres in its writing. The lecturer who is an expert in the field of history of the Malay World also stated that literary works such as folklore, saga, acrostic poems and poems were taken from Malay culture and history, including Islamic Malay Historiography, which is an important history of the Malay nation in the 13th century to the 19th century.

The second speaker, Dr. Suryadi, M.A from Leiden University, The Netherlands explained about “The Richness of Cultural Diversity as Indonesia’s Soft Power”. According to him, Indonesia as a country that has a variety of arts and culture has the potential for soft power from this wealth, where the culture of the archipelago can become a trendsetter that can influence the culture of other countries. One of Indonesia’s cultural identities that is known worldwide is Bali and its unique culture. However, there are still many interesting cultures in Indonesia that can be explored for their beauty, Dr. Suryadi said that Indonesia needs to strengthen the national spirit so that the country’s resources are not taken by other parties. Given that based on 2021 Brand Finance in the Global Soft Power Index, Indonesia is in the 45th position of Southeast Asian countries.

Then the third speaker, Dr. Sukarjo Waluyo, M. Hum. presenting material with the theme “Oral Story and Material Culture of Coastal Java: Contemporary Regional Identity Builder”. Dr. Sukarjo Waluyo explained the traditions of the Coastal Java region which are identical to cities on the north coast of Java, including the Muria Region covering the regencies of Jepara, Kudus, Pati, Rembang, and Blora. “Local literary and cultural works, material culture, tourist destinations, Adipura awards, a distinctive cultural atmosphere are the charms of Pantura cities that show another side of Central Java’s beauty which of course is an interesting characteristic on the island of Java,” he said.

The Head of Indonesian Literature Study Program at UNDIP explained that the present oral story and material culture of Coastal Java is a representation in the era of political and cultural democratization, as well as an expression to construct a distinctive identity in the Muria Region and Coastal Java. Awareness of collective memory covering aspects of history, literature, and local culture of a city/region is very important for its citizens, which has the potential to become an icon and new economic destination for the people. Especially in the current era, connection with the digital world is the main key to reviving the potential of a region that has a history in the past. (Titis – Public Relations)