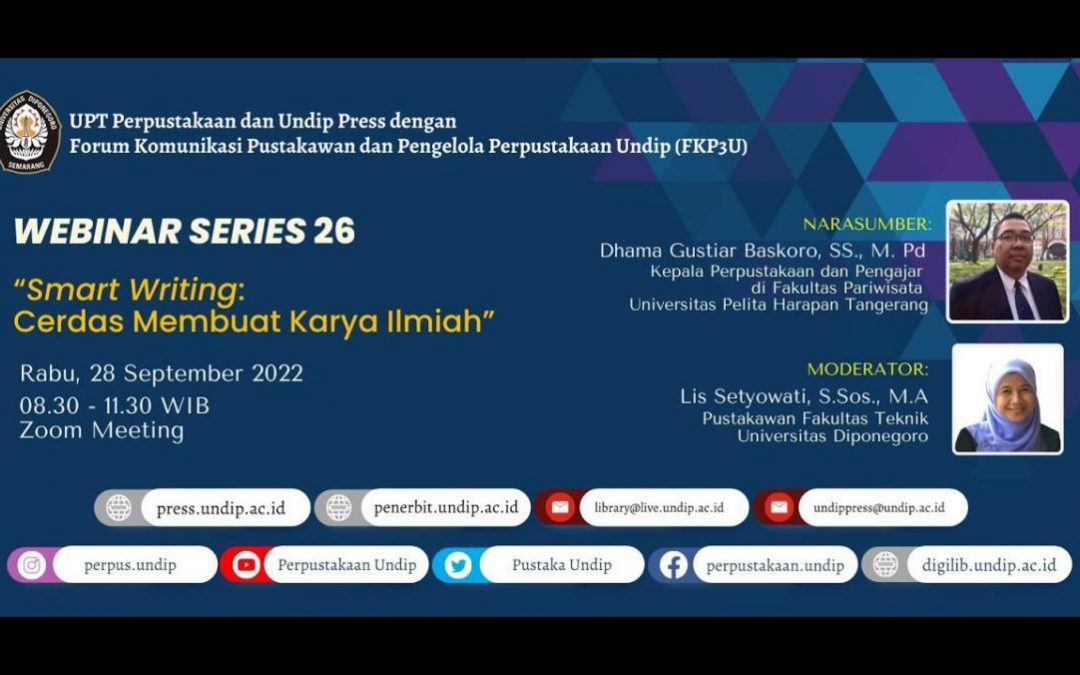 UPT Library Undip and Undip Press together with the Communication Forum for Librarians and Library Management at Diponegoro University held the 26th webinar series on Wednesday (28/9) at 08.30 – 11.30 WIB online via Zoom meeting and live streaming on Youtube. The webinar with the theme “Smart Writing: Smart in Making Scientific Work” was attended by librarians.

In this 26th webinar series, the main speaker was Dhama Gustiar Baskoro, S.S., M.Pd. And the discussion was moderated by Lis Setyowati, S.Sos., M.A. The choice of the topic of the webinar was not without reason, but in the previous webinar series the tips for writing a good scientific work have not been discussed. If reflected, writing activities are actually activities of compiling words, assembling sentences into paragraphs and then convey ideas so that they can become a complete writing that is easily understood by readers.

The event was opened by the Head of UPT Library and Undip Press, Suwondo, S. Hum., M. Kom. and then continued by his remarks which also supported the implementation of the webinar with the new theme. “Undip encourages academic staff to always grow and develop, care for love, go international, and one of the tasks at UPT Library is to encourage and facilitate this. Undip has become an international research university, so every webinar series cannot be separated from activities about publications and so on.” he explained.

In his remarks, the Chairperson of the Organizing Committee for the 26th Webinar Series, Haryani, S.Sos. M.IP explained that this event is a series of activities from 30 webinar series which will be held this year. According to her, compiling Scientific Writing requires special knowledge.

Meanwhile, Dhama Gustiar Baskoro, SS., M.Pd., explained that writing does not have to rely on all manuals or individual skills. On the other hand, writing can be helped by using various applications and its implementation is very easy.

“I will try to see a simple cycle of writing which consists of five steps, namely pre-writing, research (sources and information), drafting, reviewing, and editing. To write is to leave a small lasting imprint in the universe of knowledge. Since I am very aware of what I know as anything right now, in each of us.” he said. (Salsabil – Public Relations)