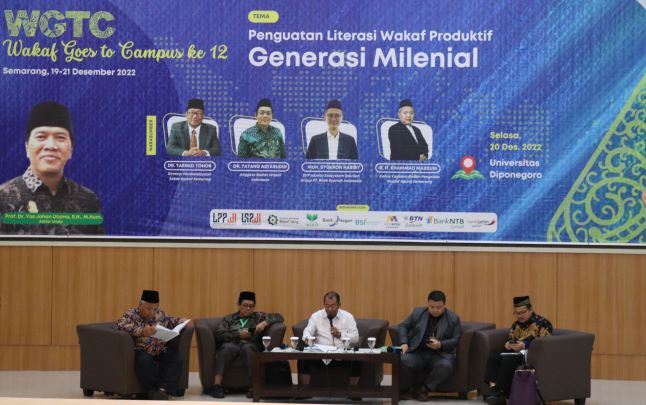 In his material, Dr. Tatang conveyed that waqf is a “trace” of human civilization. Waqf or other conceptions of it, in practice existed at the same time as the emergence of human civilization; Waqf is a “reading tool” of civilization. In various human civilizations that already have rules and arrangements for social life, it is almost certain to find various remains in the form of buildings, places of worship, or traces of other “artifacts” that are shared by community members.

“Religious Communalistic Conception, allows individual land tenure, with private land rights, without reducing the spirit of togetherness, while respecting and recognizing land rights based on Customary Law and Religious Law,” he said.

Meanwhile, in his discussion, Ir. H. Khammad Maksum explained about the overview of the Central Java Grand Mosque, Semarang and its business units. He said that in the mid-sixteenth century AD, on the orders of Sunan Kalijaga, a scholar from Persia named Maulana Ibnu Abdul Salam with his son Prince Made Pandan spread Islam and at the same time carried out the task of expanding the influence of the Demak Kingdom. The two of them cleared the forest and built a hermitage on the Pragoto hill which was used as a place of worship and teaching Islam. Gradually it developed into a mosque and at the same time served as the Kademangan of the Demak Kingdom in Semarang. This is the forerunner to the establishment of the Semarang Mosque.

Regarding President Soeharto’s instructions around the 1990s regarding the establishment of a mosque library, the Department of Religion of the Republic of Indonesia (now the Ministry of Religion) followed up this by making provisions regarding the designation and classification of mosques. The classification is: State Mosque (National level), Great Mosque (Province level), Grand Mosque (City/Regency level), Big Mosque (District level), and Jami’ Mosque (Kelurahan/Village level).

“Because the Semarang Big Mosque was included in the classification at the Semarang City level, the name was changed to the Grand Mosque of Semarang. The inauguration of Phase I of BKM Productive Waqf Semarang City was led by the Minister of Religion of the Republic of Indonesia, Mr. H. Muhammad Maftuh Basyuni, S.H., on September 6, 2007 AD or the 24th of Sha’ban 1428 H,” said H. Khammad Maksum. (Lin – Public Relations)