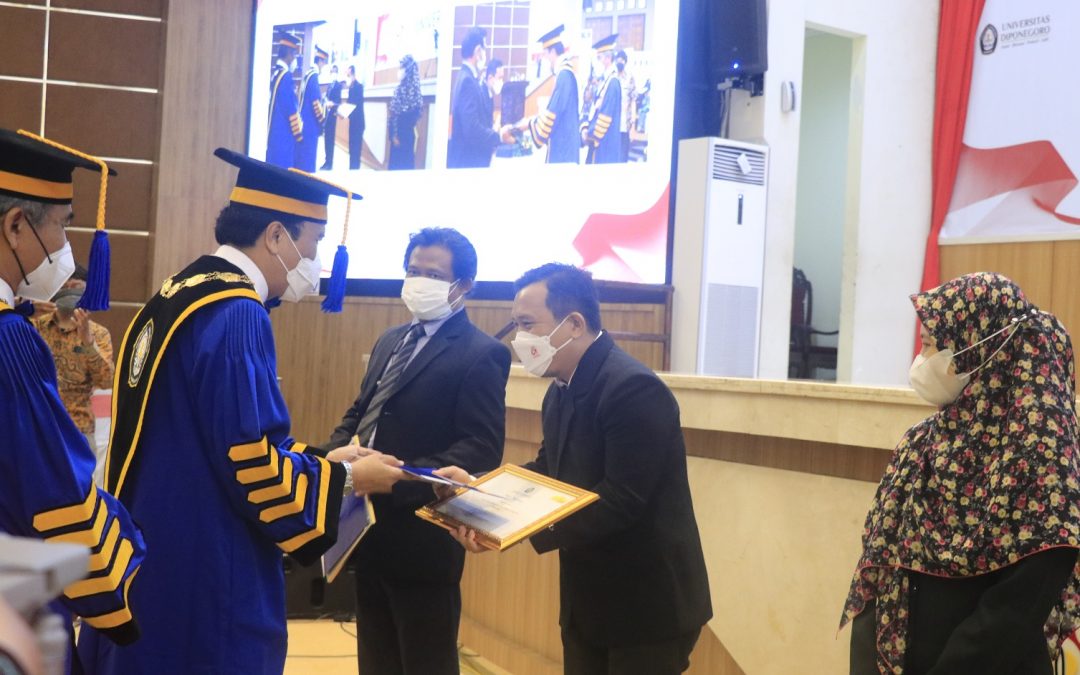 SEMARANG – The commemoration of the 64th Anniversary of Diponegoro University (UNDIP) in 2021 which was held on Friday (15/10/2021) was completed by the giving of special appreciation to all academicians and education staffs who made achievements in their respective fields. Undip Rector, Prof. Dr. Yos Johan Utama, S.H., M.Hum., gave appreciation in the form of certificates of appreciation and special incentives to students, lecturers, professors, researchers and education staffs for their achievements and dedication.

The momentum of the event that carried the tagline “Globalization, Collaboration, Acceleration” was also filled with paying respects to figures who had served as Undip Rectors by commemorating them as the names of streets in the Diponegoro Tembalang campus, Semarang City. The decision which was set in February 2020 was announced in front of the invitees, including the families of the former Undip Rectors.

These names include Prof. Ir. Eko Budihardjo, M.Sc. Street; Prof. dr. Moeljono S. Trastotenojo, SpA (K) Street; Prof. A. Suroyo Street; Governor Mukhtar Street; Prof. Jacob Rais Street; and Prof. S. Sastrowardoyo Street. Previously, the names of Prof. Soedarto and Imam Bardjo SH have also been commemorated as the names of the streets and a building. The name of Prof. Muladi will be commemorated for the multipurpose building (Muladi dome) which will soon be built.

At the 64th Anniversary of Diponegoro University, Undip Rector, Prof. Yos Johan, gave awards to 33 students. There are 9 students who made achievements at the international level and 24 students at the national level. These students are champions in the competition for making works, innovation, research and sports, especially at National Sports Week XX Papua 2021.

When giving his speech, Prof. Yos Johan said that various programs have been carried out as an effort to achieve Undip’s vision as an Excellent Research University. In the period of 2020 to 2024, Undip has reached the stage of Strengthening Research University. All of these programs carried out on the basis of Prince Diponegoro’s values, namely honesty, courage, fairness and caring.

To make Undip more well known at the international level, collaborative performances are carried out with full perseverance, cohesiveness, courage, honesty, synergy as well as high enthusiasm by the entire academic community. Prof. Yos believed that Undip can be included in the Top 500 Best Universities in the World or World Class University in the near future. Initial achievements included the results of the QS Employability Ranking which shows the speed and accuracy of Undip graduates in getting a job. In the ranking which was announced on September 23rd 2021, it showed that Undip is in the 1st position nationally, and in 251-300 position at the global level.

The Rector promised to support all research activities carried out by the academic community. The funds can be from State Budget, cooperation with other parties and Undip’s funds independently. In the future, Undip must be able to be financially independent in providing funds for its research needs.

For the field of community service, the allocation of funds also continues to increase. From the Cooperation in 2017 which amounted to IDR 3.952 billion, it has increased to IDR 10.942 billion in 2021. In total, the fund for community service at Diponegoro University in 2021 was reached to IDR 15,765 billion.

Most recently, based on the achievement of the key performance indicators of universities within the Directorate General of Higher Education, Research, and Technology of the Ministry of Education, Culture, Research, and Technology in 2020/2021, Undip is in second place with 70 achievement points, and 619 growth points. Undip managed to be in top 10% position and got an incentive of IDR 16 billion.

As a university that continues to develop its quality and become a favorite university, Undip’s achievements are not only seen from the increased budget supported by students, lecturers and education staffs. Undip also shows a commitment to be responsible for budget management with strict and accountable administrative discipline, so that it can achieve the best score in the assessment conducted by Audit Board. (PR team)