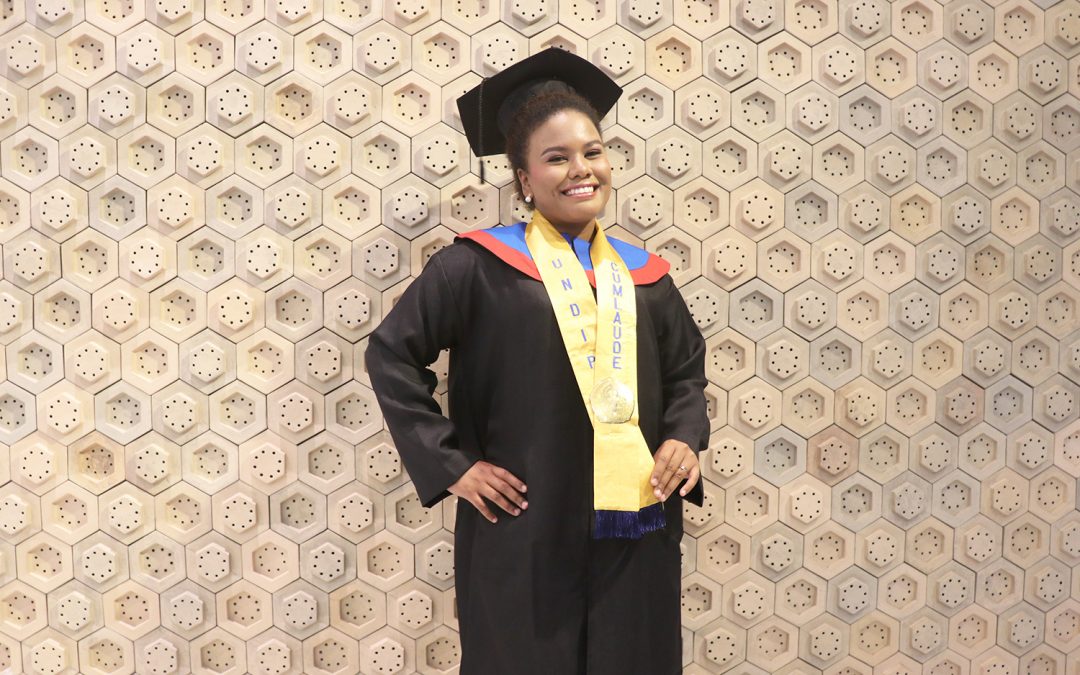 In addition, Jemimah was active in the BEM FH Undip organization in 2017, UKM Pseudorechtspraak FH Undip, and UKM at the Faculty level, namely the Research and Debate Group of FH Undip. The student of class of 2017 also participated in the Legal Intern program at the ASEAN Secretariat in 2020 and Legal Intern at the Financial Services Authority (OJK) in 2021.

“My life timeline has been pushed back due to many activities, but as much as possible I have to be responsible for the steps that have been taken. Joining a legal organization according to college majors provides many experiences such as brainstorming and also learning how to make decisions and how to think. I also have experience as an LO (Liaison Officer) related to exchange students and visitations. From there I met many people including the international community and then I realized the importance of communication in life,” said Jemimah.

On the sidelines of her busy life as a student, Jemimah started her career in the music world which was initially known to the public through her appearance at the 11th season of Indonesian Idol which aired on RCTI in 2021. Jemimah managed to occupy the 5th position and now has a single entitled “Separuh”. ” Her stunning performance at the Indonesian Idol event with millions of viewers in every show that can be seen on the Youtube channel proves that success will come if one is willing to put in the effort.

Jemimah said that, in semester 7 where she participated in the Indonesian Idol competition, dividing her time was a challenge and she often slept very little time. However, she has set the mindset that education is very important in her life, so she is reluctant to delay her studies for a long time. “We must realize that education is important, especially if it is according to passion, where later theory and practice go hand in hand according to the field of study,” she said.

The graduate of FH Undip stated that she was happy because Undip provided a forum for its students to be active in organizations in various fields. Jemimah felt the results of the organizational experience during college when she was working with many people, especially in the Indonesian music industry where there were many thoughts that had to be put together. “To produce extraordinary works, synergy is needed with friends. I feel that I obtained the ability from organizational experience,” said this African-American and Batak Karo girl.

In an interview with the Undip Public Relations team, Jemimah conveyed a message for fellow students who are still actively studying. “Life should not be one-sided, responsibility and passion must be balanced. There is a price to pay, but if we try, we can certainly get what we want. Know yourself because we know best which field is most suitable for us. The key is to have will, passion, and consistency,” said Jemimah. (Titis – Public Relations)