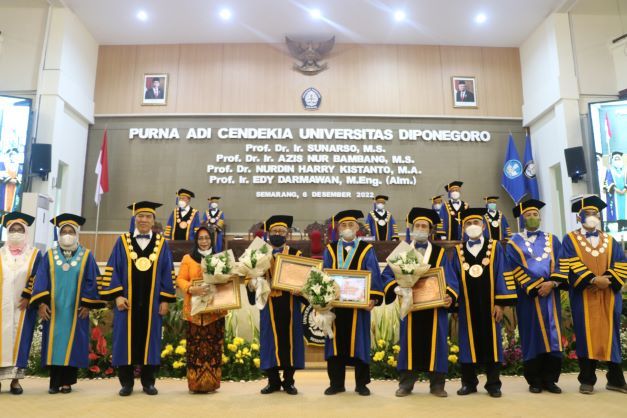 In his remarks, Undip Rector, Prof. Dr. Yos Johan Utama, S.H., M.Hum. said that today is a very historic day for Undip, carrying out the academic tradition namely the inauguration of retired professors at Undip or Purna Adi Cendekia. This academic tradition is Undip’s highest form of respect for professors who have retired from serving as state civil servants. Undip’s honor is given for all services and dedication while carrying out the duties of Tri Dharma of higher education at Undip and is a form of Undip’s respect for the teacher who has contributed to the development of the institution.

“Professors have set an example of continuous and earnest effort in developing scientific competencies that are beneficial to humanity. In addition to writing books, conducting research, publishing international and even world-class journals, the professors are still humble in their behavior,” said Prof. Yos.

“Retiring as a state civil servant is not only a sign of limiting positions, but more than that after retiring, the fields of service that will be given to the homeland, nation, state and religion are wide open. In fact, Undip opens opportunities that are the rights of professors if they wish to continue serving at Undip through the award contract route,” he explained.

On the occasion, Prof. Narso discussed the “Fattening of Beef Cattle without the Use of Grass”. “Complete-feed is a complete ration that has been prepared to meet the feed substance content according to the needs of livestock which contains coarse and concentrated feed sources,” he said.

Meanwhile, Prof. Aziz in his speech discussed the “Theory and Applied Economic Empowerment of Coastal Communities”. According to him, the potential for marine fisheries in Indonesian waters is quite large. The causes of poverty are powerlessness, vulnerability, physical weakness, misery, and alienation. The cause of poverty is termed a deprivation trap.

“The main target of development is to make people more prosperous. Government programs that have a direct impact on the economy of coastal communities, one of which is PEMP and PNPM Mandiri for maritime affairs and fisheries. For this reason, in implementing economic empowerment in coastal communities, development is needed in other fields that can support the success of the program, including development in the fields of port facilities and infrastructure, fish auction place, industrial sites, economic facilities such as local markets and so on,” explained Prof. Aziz.

Meanwhile Prof. Nurdin delivered the theme of the speech on the “Millennial Generation, Digital Lifestyle”. “Millennials or Gen Y are the first to enter the workforce at the start of the new millennium, the most educated generation, and millennials will comprise 75% of the global workforce by 2025. In a society full of automation and technology-driven, millennials are facing an unpredictable level of change in 60 years with the massive facts, data, books, videos, programs that connected them with their activities and work,” Prof. Nurdin concluded. (Lin – Public Relations)