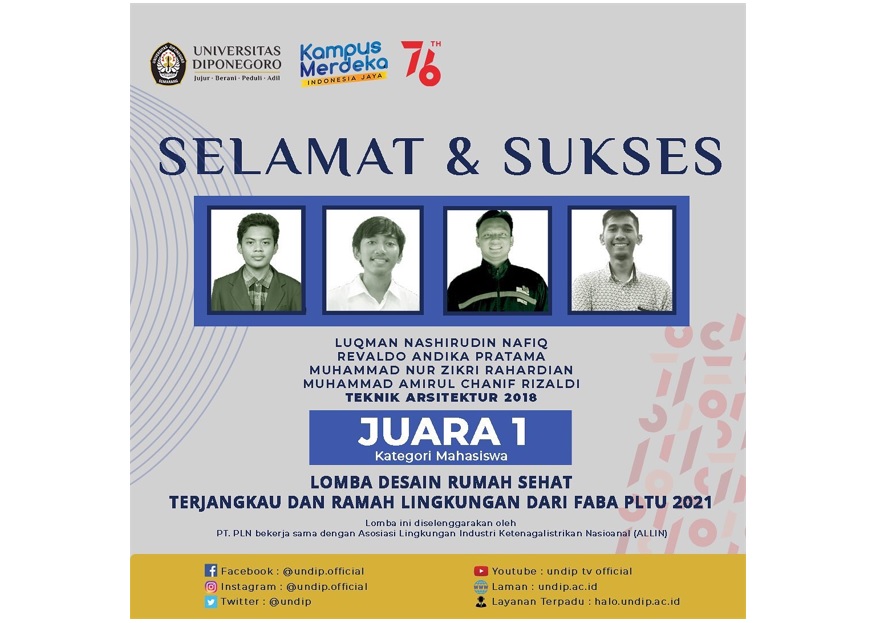 Luqman Nashirudin Nafiq, who is familiarly called Luqman, succeeded in bringing his team to 1st place in the healthy home design competition for the student category. The announcement of the winner of the competition was announced on Tuesday (17/8) through the @pln_id Instagram account. This competition is organized by PT. PLN in collaboration with the National Electricity Industry Environmental Association (ALLIN).

With the theme “Affordable and Environmentally Friendly Healthy Home Design Competition from FABA PLTU 2021,” Luqman together with Revaldo Andika Pratama, Muhammad Nur Zikri Rahardian, and Muhammad Amirul Chanif Rizaldi created a healthy residential design with a modular, flexible, and adaptive concept. The modular concept makes the rest of the material from the house to not being wasted. “From the modular principle, the rest of the material is not wasted, so that it can be one of its advantages,” said Luqman when contacted by the IKA Undip contributor team, on Monday (23/8).

The use of innovative FABA materials, namely waste from coal combustion in the form of fly ash and bottom ash, is also an important part of the healthy house design by Luqman and his team. The FABA materials that he currently uses as paving blocks and bricks can be developed for other materials such as shingle tiles, wall panels, tiles, and others.

Furthermore, Luqman explained the purpose of establishing flexible space and adaptive space in its design. According to him, flexible space is useful for responding to the needs of space for the interaction of its users. Meanwhile, the adaptive room was innovated by adjusting to the Covid-19 conditions. “The adaptive room is to respond to the Covid-19 issue itself, so there is room for isolation and space for sunbathing,” explained the Undip Architectural Engineering student 2018.

Their supervisor, Resza Riskiyanto revealed that the designs made by Undip Architectural Engineering students 2018 were purely from their creativity and innovation. “I am just directing the process so the result of designs do not have to be similar with my preference. All design decisions they make are purely from their creative and innovative ideas,” said Rezsa to the IKA Undip contributor team, on Monday (23/8).

Rezsa saw the added value made his students’ design concept worthy of getting first place. “It’s good enough in terms of programming design. If talking about a house, the students don’t just make it as a place to live but it also has other functions in the form of economic factor and other factors, so that it can be an added value. Since other designs are only concerned with simple and functional factors,” he explained.

Although all discussions between members and design work were communicated online, Luqman admitted that he did not have any significant problems. The design process took less than three weeks. Luqman and his team also managed time efficiently when they had to prepare for the second selection in the form of a presentation.

The victory of Luqman and his team seemed to be able to raise the spirit of competition in the Undip Architectural Engineering community, as stated by Rezsa. “Other students are starting to be competitive even though it’s still in the stage of wanting to join and participate to the competition. At least it can grow the spirit of fellow students,” he concluded.